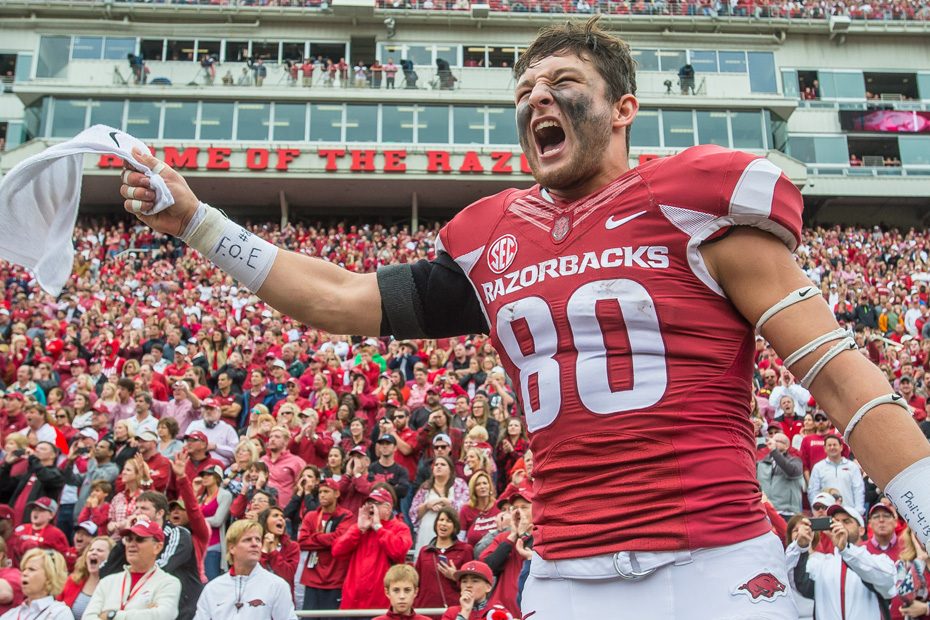 On two occasions, Arkansas’ fate came down to one play. Allen answered the call on both. The second was the game winner – a 25-yard strike to junior wide receiver Drew Morgan followed by a successful two-point conversion in the fourth overtime.

Allen finished the day 19-of-31 with 233 yards, three touchdowns and one interception while running back Alex Collins grounded out 105 yards and one touchdown on 25 carries.

Arkansas wasted little time finding the end zone on the game’s opening drive. Two rushes by Collins and three first-down grabs by Hunter Henry for 52 yards helped set up an end around to Dominique Reed for an 11-yard score.

The defense followed the offense’s lead, forcing the Tigers to punt on four of their five first-half drives.

Arkansas went up 14-0 when Allen guided the Razorbacks on a 10 play, 60-yard drive that ended in a 23-yard scoring toss to junior tight end Jeremy Sprinkle.

Arkansas, which manufactured 213 yards and limited Auburn to 112 in the first half, had the opportunity to go up three touchdowns, but an interception thrown by Allen at the Auburn 4-yard line halted the Razorbacks’ drive with 6:22 left in the half. The Tigers capitalized by creating a six minute, 16 play, 96-yard scoring drive that would ultimately end the half with Arkansas leading 14-7.

Turning its tempo up a notch, Auburn tied the contest 14-14 on the opening possession of the second half.

A 7-yard rushing touchdown by Collins at the 2:14 mark in the third quarter broke the tie and also moved Collins into sole possession of 10th place on the school’s career rushing touchdowns list.

After quality defensive stands by both teams, Auburn broke through and marched 93 yards down the field in 12 plays, getting a 1-yard touchdown run from quarterback Jeremy Johnson to close the gap 21-21 at the 6:54 mark in the fourth quarter.

Arkansas responded, but was forced to settle for a 25-yard Cole Hedlund field goal with 1:07 remaining in the game. The Razorbacks had hoped that would be all they needed to close out the contest. However, Auburn moved the ball into Arkansas territory and kicker Daniel Carson booted through a 41-yard field goal to tie things up again and ultimately send it to overtime.

In the first overtime, Auburn got the ball first, went 25 yards on three plays and capped its drive with a 2-yard touchdown run by Peyton Barber. For Arkansas, on fourth and three and the game on the line, Allen zipped a 6-yard touchdown pass to Morgan while Hedlund followed with the PAT to even the score.

Both teams exchanged touchdowns in the second and third overtimes and were also successful on the two-point conversion in the third.

On the first play of the fourth overtime, Allen connected with Morgan for a 25-yard go-ahead touchdown pass that would be the game winner.

On the Tigers’ next possession, the Razorback defense shut down the run on first down and forced three straight interceptions to close out the contest.

With his production, Allen surpassed Barry Lunney Jr. (5,782) for sixth in program history with 5,792 passing yards for his career.

Collins has now eclipsed the 100-yard mark 12 times in his Razorback career. He also moved into sixth place on the school’s all-time rushing list with 2,913, surpassing James Rouse’s total of 2887 set from 1985-89.

Defensively, freshman linebacker Dre Greenlaw tallied a team-leading 16 tackles. Greenlaw has led the Razorbacks in tackles in three of the last four games and also leads all SEC freshmen with 53.

The victory is Arkansas’ third consecutive SEC home win and the first time the Razorbacks have won three straight SEC home games since 2011.

The Razorbacks will host UT Martin for homecoming on Oct. 31 at 3 p.m. The game will be nationally televised on SEC Network.