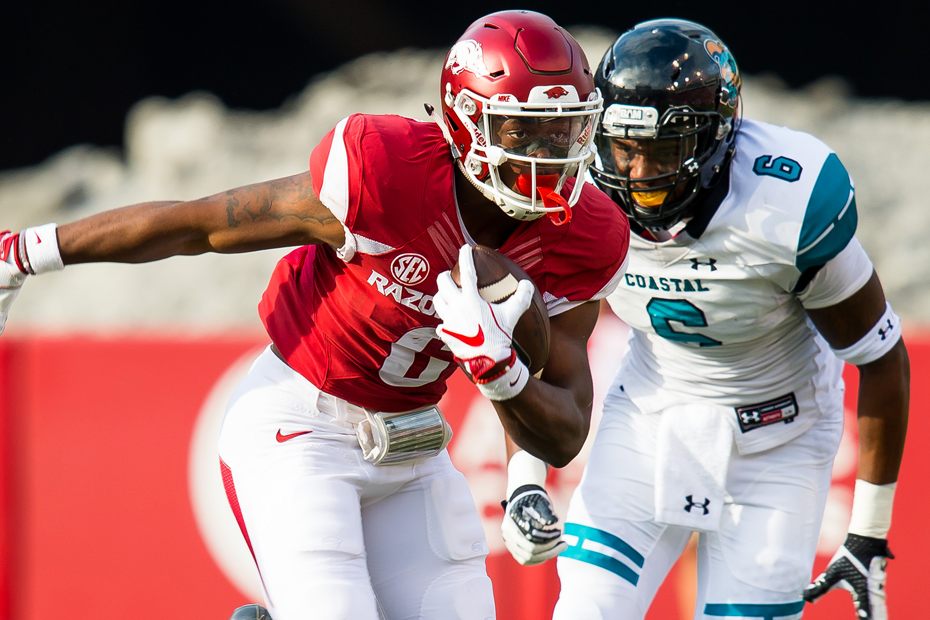 Hogs Down Coastal Carolina On Homecoming

Arkansas’ opening drive went 68 yards on seven plays and was capped off with a five-yard touchdown run by sophomore Devwah Whaley. The touchdown was the fourth of the season for Whaley as he finished with 81 yards on 12 carries.

Sophomore T.J. Hammonds took a screen pass 60 yards to tie the game at 14 early in the second quarter. It was the first of two long touchdowns on the afternoon for Hammonds as he finished with 119 rushing yards on seven carries on the ground in addition to 60 receiving yards.

Sophomore Connor Limpert gave Arkansas a three-point lead before halftime off of a 46-yard field goal. It was the second field goal over 45-yards this season for Limpert.

Sophomore Austin Cantrell scored from five yards out to cut Coastal Carolina’s lead to three midway through the third quarter. It was the first rushing touchdown of Cantrell’s career.

On his second long touchdown of the day, T.J. Hammonds took a handoff 88 yards to bring Arkansas within six points early in the fourth quarter. It was the longest rushing touchdown by a Razorback since Jonathan Williams took one 90 yards against Nicholls State in 2014. Hammonds touchdowns of 60 yards and 88 yards against Coastal Carolina are the longest plays from scrimmage for the Razorbacks this season.

Redshirt freshman Cole Kelley powered his way into the end zone with 1:55 remaining in the fourth quarter for the Razorbacks go ahead touchdown. Kelley finished 16-of-25 with 264 yards through the air with one passing and one rushing touchdown.

Up Next
Arkansas travels to Baton Rouge, La., for the annual Battle for the Golden Boot matchup against LSU. Kickoff is scheduled for 11 a.m. CT on ESPN.