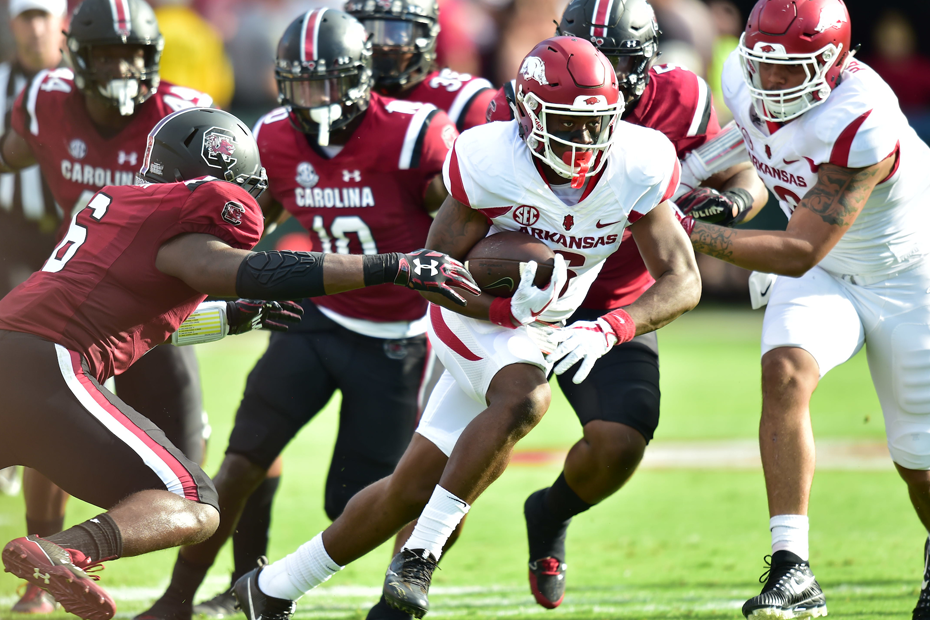 Three defensive touchdowns by South Carolina proved to be too much to overcome as Arkansas drops its first road game of the season, 48-22, to the Gamecocks.

A 48-yard field goal from sophomore Connor Limpert tied the game at three in the first quarter. The first field goal of the season for the Razorbacks came on Limpert’s first career field goal attempt as it marked the longest by a Razorback since Adam McFain made a 54-yarder against Auburn Oct. 22, 2016.

Redshirt freshman Jordan Jones hauled in a 5-yard touchdown pass from Austin Allen to tie the game at 10 early in the second quarter. It was Jones’ first career touchdown as the Smackover, Arkansas native tallied 37 yards on three receptions.

Graduate transfer David Williams found the end zone for the first time in the fourth quarter from 4-yards out. Williams has accounted for six touchdowns in five games, and finished the day with 32 yards on seven carries.

Junior Jonathan Nance hauled in a 34-yard pass from Cole Kelley late in the fourth quarter for Arkansas’ final score. Nance has five receiving touchdowns in the last four games as he finished the day as the Razorbacks leading receiver with 116 yards on eight receptions. Kelley went 8-of-13 for 140 yards, with all of his snaps coming in the fourth quarter.

Up Next
The Razorbacks travel to Tuscaloosa, Alabama to face to the top-ranked Crimson Tide next Saturday with kickoff time to be determined.