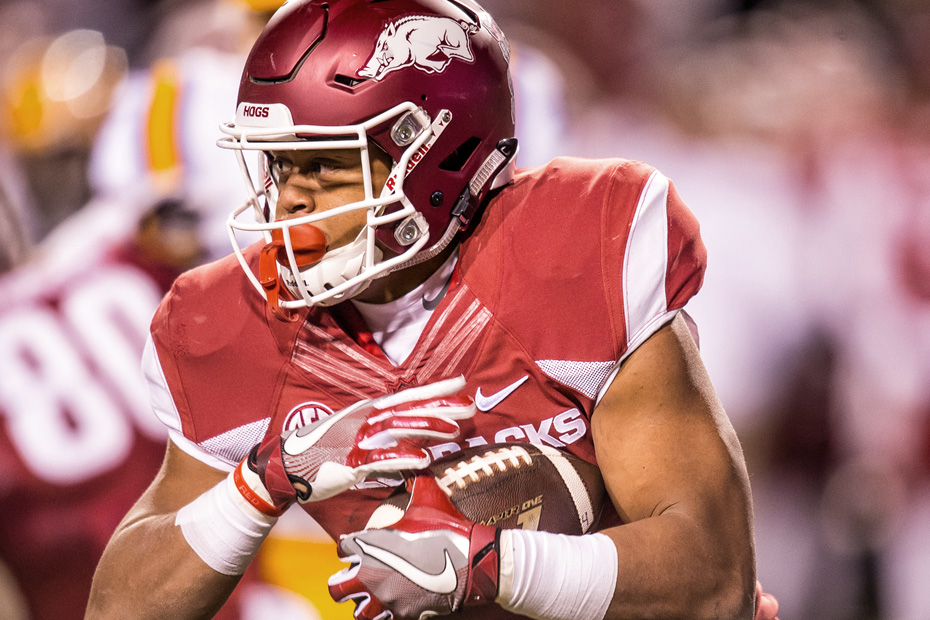 FAYETTEVILLE, Ark. – The 25th-ranked Razorback football team struggled to control the ground game of No. 24 LSU Saturday night inside Donald W. Reynolds Razorback Stadium, falling 38-10 to the Tigers on Senior Night. Arkansas drops to 6-4 on the year overall, 2-4 in SEC play.

Running back Rawleigh Williams III finished the game with 49 yards on 13 carries. Early in the second half, Williams crossed the 1,000-yard threshold for the year, marking his first 1,000-yard season in his career. Williams now has 1,038 yards through 10 games and it gives head coach Bret Bielema a 1,000-yard rusher in each of the last 11 seasons.

Freshman Devwah Whaley led all Razorbacks with 52 yards on seven carries. It was his fifth game of 50 or more yards on the ground this season.

Through the air, quarterback Austin Allen was 15-for-31 passing for 210 yards and one touchdown. He found eight different receivers in the game, tying for the second-largest total in a game this year. Tight end Jeremy Sprinkle led all receivers with four catches for 29 yards. For Allen, he now has 20 touchdown passes this season, tying his older brother Brandon Allen for seventh most touchdown passes in a season in program history.

It wasn’t the greatest of starts for the Razorbacks as LSU scored on three of its first four possessions utilizing a heavy run game with Leonard Fournette and Derrius Guice in the backfield. Fournette scored the Tigers’ first two touchdowns, which was followed by Guice’s score to give LSU a 21-0 lead midway through the second quarter. LSU ended up with 390 yards rushing in the game, 252 of those yards came from Guice.

Arkansas tried to get a comeback going late in the second frame with the help of some big plays from Whaley and senior wide receiver Dominique Reed.

With 10 minutes to go in the first half, Whaley provided the spark with a strong 34-yard run to get the Hogs across midfield. Six plays later, Allen found the deep ball touch when he connected with Reed along the sideline for a 44-yard score.

Arkansas tried to take advantage of a big break after LSU fumbled a punt early in the third quarter down by just 14, but were only able to come away with a field goal when Adam McFain booted one through the uprights from 24-yards out, making it 21-10. For McFain, the senior remains perfect on the season in field goals, now 6-for-6.

The field goal were the final points Arkansas was able to put on the board for the remainder of the game as LSU scored 17 more points and totaled 309 more rushing yards in the second half alone.

Up Next
Arkansas hits the road for its final two games of the regular season starting with Mississippi State in Starkville on Nov. 19. Kickoff is slated for 6 p.m. CT and will be televised on ESPN2.