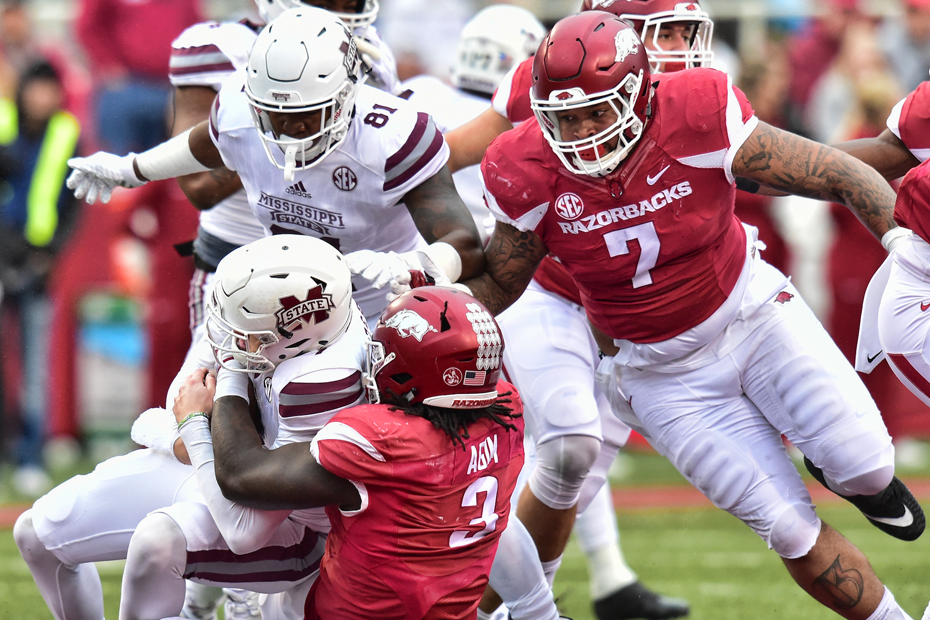 Hogs Fall To No. 16 Mississippi State At Home

Arkansas fell to No. 16 Mississippi State as the Bulldogs scored a late go ahead touchdown with 17 seconds left in the fourth quarter to win the game 28-21.

Junior Reid Miller recovered a muffed punt by Mississippi State that gave Arkansas prime field position at the Bulldog 36-yard line. It was the first recovered fumble of Miller’s career.

Three plays following the muffed punt, David Williams powered his way into the endzone from three yards out to give Arkansas an early 7-0 lead. It was the fifth touchdown on the ground for Williams this season as he finished with 75 yards on eight carries with one touchdown.

With Mississippi State backed up against its own goal line, Sophomore McTelvin Agim forced a fumble that was recovered by Briston Guidry in the endzone to give the Razorbacks a two score lead. It was the first forced fumble of Agim’s career and the second fumble recovery for Guidry this season. Agim finished with a career high nine tackles including 2.5 for loss yardage with one sack and two forced fumbles.

Arkansas retook the lead off of a one yard touchdown from Sophomore Devwah Whaley. It was Whaley’s fourth rushing touchdown in five games and sixth overall this season.

Up Next
Arkansas closes out the season against Missouri next Friday, Nov. 24 in Razorback Stadium. The ‘Battle Line Rivalry’ is scheduled to kickoff at 1:30 p.m. on CBS.