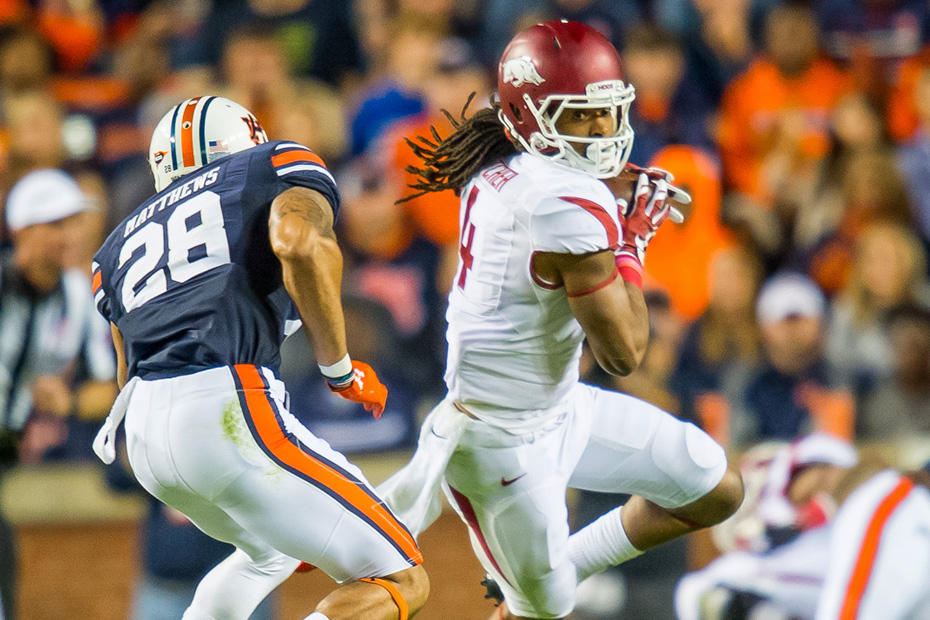 AUBURN, Ala. – The 17th-ranked Razorback football team fell to No. 21 Auburn, 56-3, Saturday night inside Jordan-Hare Stadium. Arkansas drops to 5-3 on the year, 1-3 in the SEC, and will head into its bye week after opening the season with eight straight games.

Even after suffering an injury in the second quarter, quarterback Austin Allen still managed to throw 17-of-30 passes for 187 yards. It’s the eighth straight game that Allen has thrown for 180 yards or more and third straight game with 17 or more completions.

Six different receivers caught at least one pass in the game for Arkansas. Senior Keon Hatcher led all Hog receivers with seven catches for 81 yards, while Drew Morgan added four catches for 48 yards, all in the first half.

Hatcher extended his streak to 26 consecutive games with a reception for a first down dating back to 2013 and crossed the 1,500-yard career receiving threshold earlier in the first half. His seven catches also ties his career high last set against Toledo in 2015.

The Razorbacks’ lone points came from the kicking game when senior Adam McFain booted a career-long 54-yard field goal at the end of the first half. It’s the longest field goal by a Razorback since Zach Hocker kicked a 54-yarder in 2013 against Mississippi State and sixth field goal of 50+ yards in the SEC this year.

Arkansas’ defense struggled against the Auburn running game all night as the Tigers rushed for 536 of its 625 total yards. Kamryn Pettway led all running backs with 192 yards on 27 carries with two touchdowns, while quarterback Sean White rushed for a touchdown of his own to go with his 77 yards passing.

Up Next
Arkansas will have a bye next week and will not play its next game until Nov. 5 when the No. 15 Florida Gators come to Donald W. Reynolds Razorback Stadium. Kickoff time has yet to be set.