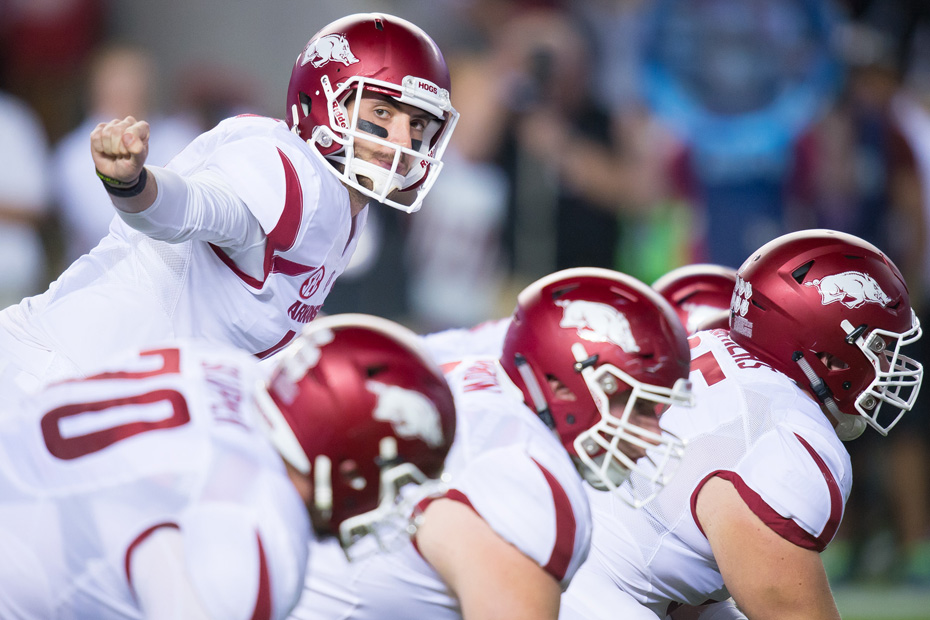 Hogs Fall to No. 8 Alabama in Tuscaloosa

TUSCALOOSA, Ala. – No. 8 Alabama defeated Arkansas 27-14 on Saturday night at Bryant-Denny Stadium.

For the fifth time this season, Arkansas limited its opponent to their lowest scoring output of the season.

But Arkansas struggled to find its rhythm on offense, manufacturing just 220 yards of total offense to Alabama’s 396.

Defensively, junior linebacker Brooks Ellis led the way for the Razorbacks, posting a career-high 15 tackles (13 solo), including 2.5 for loss.

Alabama out-gained Arkansas 204-77 in the first half, but the Razorbacks led 7-3. Credit the defense. In Alabama’s first two drives, the Crimson Tide marched inside the Arkansas 10 both times. But the Razorback defense held strong, allowing only a field goal on the opening drive.

On Alabama’s third possession, Arkansas defensive back Josh Liddell intercepted Jacob Coker at the Arkansas 31-yard line. However, the Razorbacks were unable to capitalize on the turnover.

With 2:26 remaining in the half, redshirt freshman Santos Ramirez picked off Coker, and the Razorbacks took over at the Alabama 12-yard line. This time, Arkansas made the Crimson Tide pay. Senior quarterback Brandon Allen found junior wide receiver Drew Morgan wide open in the middle of the end zone for an easy 4-yard touchdown pass.

Trying to trim the deficit before the end of the half, Alabama attempted a 48-yard field goal but missed it wide right.

The defensive battle continued for the first 13 and a half minutes of the third quarter, but momentum quickly shifted Alabama’s way when Coker threw an 81-yard touchdown pass to freshman wide receiver Calvin Ridley to give the Crimson Tide a 10-7 lead with 1:39 remaining in the quarter.

Alabama followed up with scoring drives on three of its next four possessions to extend its lead 27-7.

With 2:44 left in the contest, Arkansas put together a five play, 74-yard drive that resulted in a 54-yard touchdown pass to junior wide receiver Dominique Reed.

But that would be all for the Razorbacks as the Crimson Tide went on to win 27-14.

The Razorbacks will have its first off weekend of 2015 on Oct. 17 before returning to action in Fayetteville against Auburn on Oct. 24.