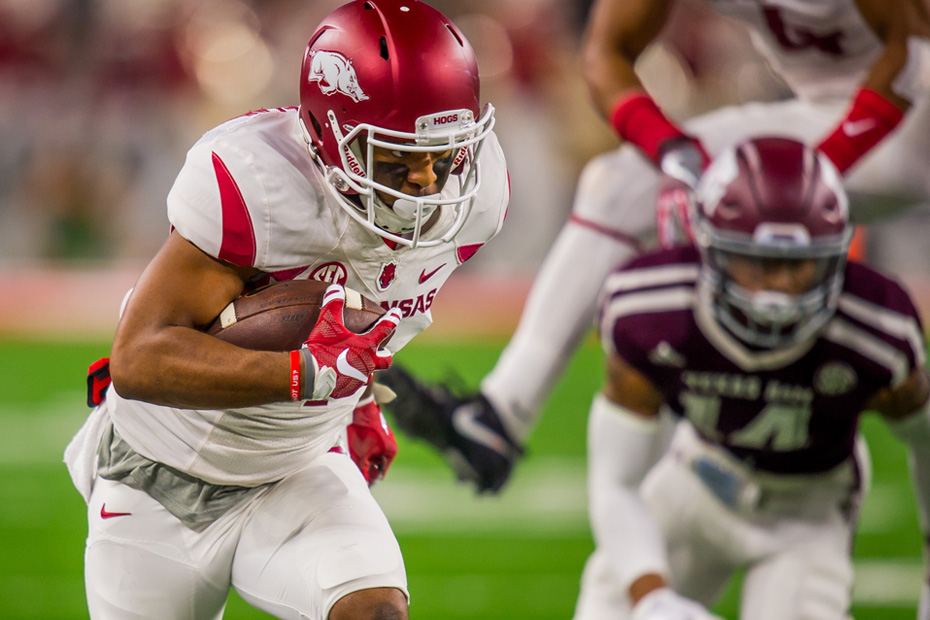 ARLINGTON, Texas – Quarterback Austin Allen threw for a career-high 371 yards and had two touchdowns through the air, but it was not enough Saturday night as the 17th-ranked Razorbacks fell to No. 10 Texas A&M, 45-24, in its SEC opener at AT&T Stadium.

Arkansas (3-1) suffers its first loss of the season and struggled to keep pace with Texas A&M quarterback Trevor Knight, who was only 12-of-22 through the air, but gained 157 yards on the ground, scoring twice on 10 carries.

Allen, who was looking to become on the second quarterback in Arkansas history to win his first four collegiate starts, was 28-of-42 passing for a career-high 371 yards with two touchdowns. It was still the fourth-straight game that Allen completed 16 or more of his passes and third game of 65 percent or more on completions.

On the ground, Arkansas used a steady dose of Rawleigh Williams III, who carried the ball 17 times for 79 yards and had one touchdown. It was Williams’ fourth touchdown this season.

Wide receiver Jared Cornelius had a career night racking up 126 yards on seven catches with one touchdown. Both the catches and receiving yards were career-high totals.

Arkansas benefitted from some Texas A&M miscues to take the early lead in the first quarter. After stalling on their first offensive drive, the Razorbacks punted away to the Aggies, where Christian Kirk was waiting to receive. Kirk, however, fumbled the catch and allowed the Hogs to recover on the Texas A&M 16-yard line.

Two plays later, Allen found Keon Hatcher in the corner of the end zone for a 15-yard score to give Arkansas the 7-0 lead. For Hatcher, he now has 14 career touchdown receptions and is one away from tying Greg Childs for 11 all-time in school history.

Arkansas seemed to find its offensive rhythm on its second touchdown drive going 75 yards in just five plays, capped with an 8-yard scoring run from Williams, his fourth touchdown of the season. The big play came from an Allen connection to Jared Cornelius down the sideline for 38 yards, one of six passes that went for 10 yards or more in the first half.

A&M was able to even the score at 17 after Knight ran in his second touchdown of the night from 48 yards out with 13 seconds left in the first half.

Unfortunately, Arkansas struggled to find the end zone in the second half. A fourth quarter touchdown pass from Allen to Cornelius was the only score for the Razorbacks after the 17-point first half. Texas A&M was able to punch in four touchdowns after halftime to take control for the rest of the game.

Up Next
The Razorbacks head to Little Rock for its lone game of the season at War Memorial Stadium when they face Alcorn State at 11 a.m. CT. The game will be televised on the SEC Network-Alternate channel.