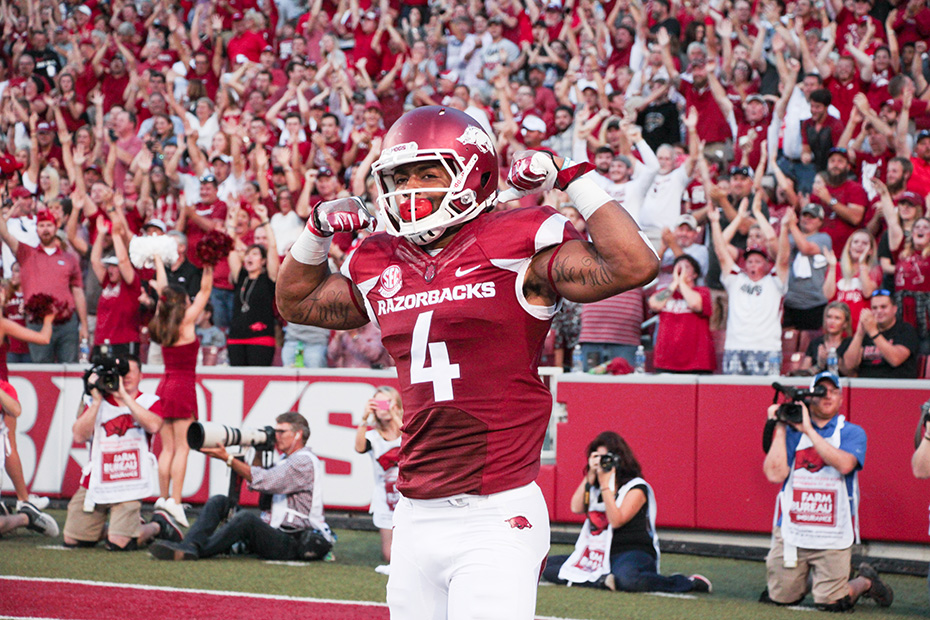 FAYETTEVILLE, Ark. – Winners of five straight and fresh off a convincing 42-3 win against Texas State Saturday night, Arkansas made big moves in each of the national polls released on Sunday. After earning a No. 24 ranking in both polls last week, the Razorbacks moved up seven spots in the Associated Press Poll to No. 17 and up six spots to No. 18 in this week’s Amway Coaches Poll.

The No. 17 ranking in the AP Poll is Arkansas’ highest since September 8, 2012 when it was No. 8. Arkansas also made its first appearance this season in the FWAA-NFF Super 16 Poll, checking in at No. 16.

For just the fourth time since entering the SEC in 1992, the Razorbacks have won nine times over a 10-game stretch. Arkansas is one of 29 FBS teams that is 3-0 through the first three weeks of the season and one of 12 FBS programs to win at least nine of its last 10 games.

Over its last 10 games, Arkansas is 4-0 away from the friendly confines of Donald W. Reynolds Razorback Stadium, including three true road wins over top 25 teams (No. 18 Ole Miss, No. 9 LSU, No. 15 TCU). Led by a pair of touchdown passes from quarterback Austin Allen and two on the ground by sophomore Rawleigh Williams, Arkansas was able to hit the 40-point plateau for the second straight game and for the seventh time over its last 10 games, which is tied for the most in the nation over that span.

Tickets to the Southwest Classic next week at AT&T Stadium are still available and can be purchased online here. For just $25, students can purchase a Spirit Pass, which includes a standing room only ticket for inside the tiered deck area at AT&T Stadium. Students must log into their student account in order to purchase a ticket. Log in link is here.