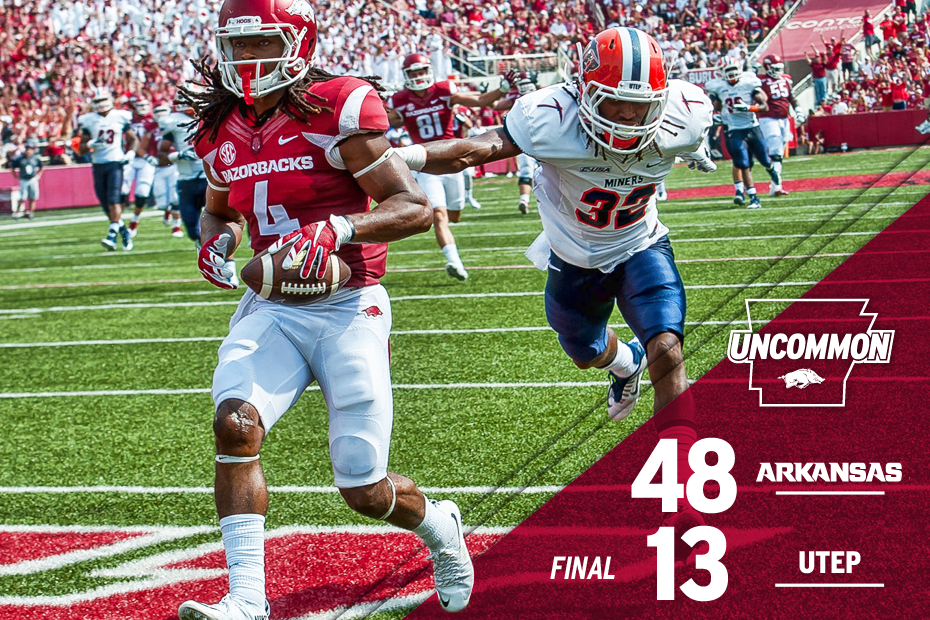 The senior quarterback did that while going a long way to showing he’s up to leading a talent-rich group of Razorbacks loaded with expectations for the first time in his career as the starter.

With Enos calling the plays for the first time since leaving his job as head coach at Central Michigan, Allen was at his best — and most efficient — in leading No. 18 Arkansas to a 48-13 win over UTEP in the season opener on Saturday.

Allen threw for a career-high 308 yards and matched his best with four touchdown passes, doing so while completing 14 of 18 passes.

“It went well,” Allen said. “It was different with (Enos) being on the sideline, but I thought it went really well.”

Arkansas won only three games two years ago in Allen’s first season as the starter, though it improved to 7-6 a year ago. However, the Razorbacks enter this season ranked for the first time since 2012, and Allen thrived on Saturday with a restocked roster surrounding him to open coach Bret Bielema’s third season.

Keon Hatcher caught two of Allen’s touchdown passes, finishing with six catches for 106 yards, but it was Allen who shined the brightest while extending his streak of pass attempts without an interception to 108.

That’s the second-best streak of his career, following a stretch of 116 passes without an interception last season.

“(Allen) just had a control and a presence out there,” Bielema said. “I thought he was in control the entire time.”

Aaron Jones led the Miners with 15 carries for 70 yards rushing, but UTEP was unable to overcome a series of second-half miscues in the blowout loss.

The Miners were outgained 490-204 in total yardage, with quarterback Mack Leftwich finishing 9-of-14 passing for 120 yards. The sophomore, however, opened the second half by throwing an interception, and UTEP’s next two drives ended with poor snaps on punt attempts, leading to quality field position for Arkansas.

Following the interception and first of the bad snaps, Arkansas needed only two plays to score a pair of touchdowns to open the second half.

Alex Collins, who finished with 127 yards rushing on 12 carries, had the first from 7 yards out, while Kody Walker ran in from 3 yards out to put the Razorbacks up 42-10.

It was the play of Allen, though, that set the tone early as the Razorbacks built a 28-10 halftime lead.

The senior threw for touchdowns on each of Arkansas’ first four drives of the game, including a perfectly placed 38-yard touchdown pass to Hatcher late in the second quarter. He also connected with Drew Morgan and Jared Cornelius for scores during the half, in which he finished 10-of-13 passing for 256 yards.

Allen’s previous career best was 296 yards passing against Georgia last season, and he also had four touchdowns against Nicholls State a year ago.

He nearly bested both of those in the first half of his first game under Enos’ watch.

“That was incredible watching him today,” Arkansas linebacker Brooks Ellis said. “He was doing a great job. It’s fun being on the sideline so long because they’re moving the ball down the field and just getting big play after big play.”

The Razorbacks return to action next weekend playing host to Toledo at 3 p.m. at War Memorial Stadium in Little Rock, Arkansas. Tickets are still available for next Saturday’s game and may be purchased online HERE or by calling 1-800-982-HOGS.