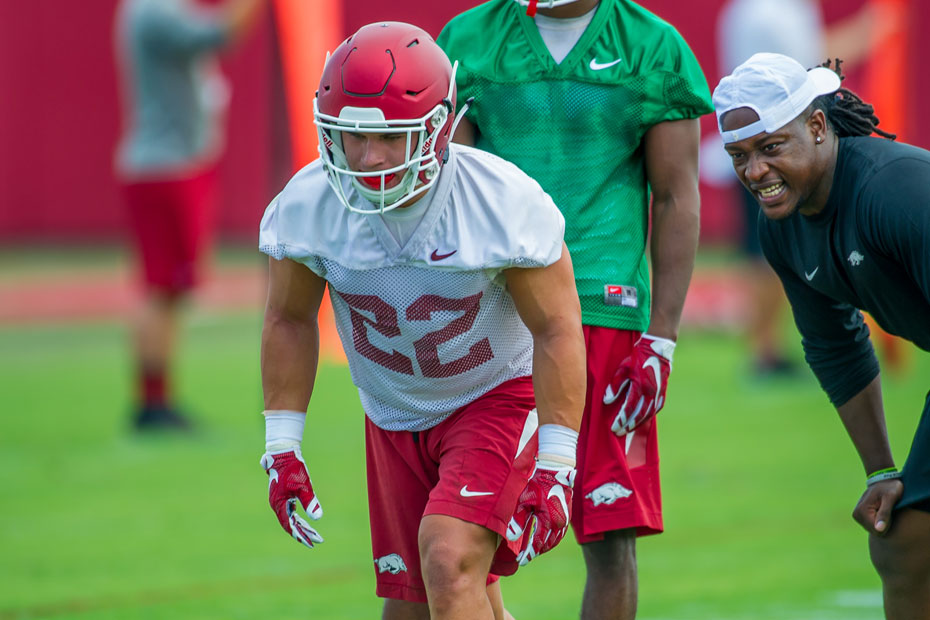 Four straight days of high-intensity practices culminated this afternoon as the Razorbacks practiced for more than two hours in Practice 13 of fall camp. The Razorbacks will scale it back a little on Friday before another live contact scrimmage on Saturday.

1. The Other Allen
It has been well documented that Arkansas’ backup quarterback, Austin Allen, is the younger brother of starting quarterback Brandon. Fans haven’t had a chance to see much of Austin aside from some work last year in blowouts and when Brandon was injured in the Ole Miss game. But Austin has quietly put together a very good fall camp.

The younger Allen earned praise from head coach Bret Bielema after another good practice. He has continued to get more reps as the second-string quarterback and has cut back on critical mistakes. Perhaps most impressive is his accuracy down the field where he has consistently connected on big plays over the past two weeks.

2. Walk On Pride
Coach Bielema was a walk-on defensive lineman at Iowa so it comes as no surprise that he has placed a big emphasis on the walk-on program here at Arkansas. In fact, he’s awarded scholarships to 12 walk-ons since he arrived in 2013.

Though not on scholarship yet, two defensive walk-ons have played great football this fall and are pushing for playing time this season. Josh Harris is already taking reps as the first-team Mike linebacker while Reid Miller has earned second team reps at both cornerback and safety.

Harris comes from an NFL family as his father, Jackie, played 12 seasons as a tight end with four different teams. Miller is a true freshman that enrolled in January and played his senior season at IMG Academy in Bradenton, Fla. where he was teammates with freshman defensive lineman Hjalte Froholdt.

Wrapped up 4 straight days of good work for our crew. Will back off them a little tomorrow for a group ready to grind on Saturday. #WoooPig