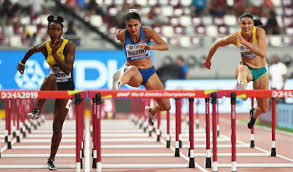 After running since the start of the 2019 calendar year, Janeek Brown has finally completed her 2019 track and field season following a run in the final of the 100-meter hurdles.

The Kingston, Jamacia native, represented her home country in the meet, advancing through the rounds running 12.61 in the prelims followed by a run of 12.62 in the semifinals.

In the finals, Brown posted a time of 12.88 to finish seventh at her first World Championships. Brown’s teammate Danielle Williams finished the meet with a bronze medal running 12.47 seconds.

Brown finished 2019 with indoor and outdoor First-Team All-American honors as well as an NCAA Championship in the 100-meter hurdles during the outdoor season. Brown recorded the second-fastest time in the 100-meter hurdles in NCAA History posting a time of 12.40 this past June in Austin, Texas. Following her sophomore season, Brown went pro signing with Puma.