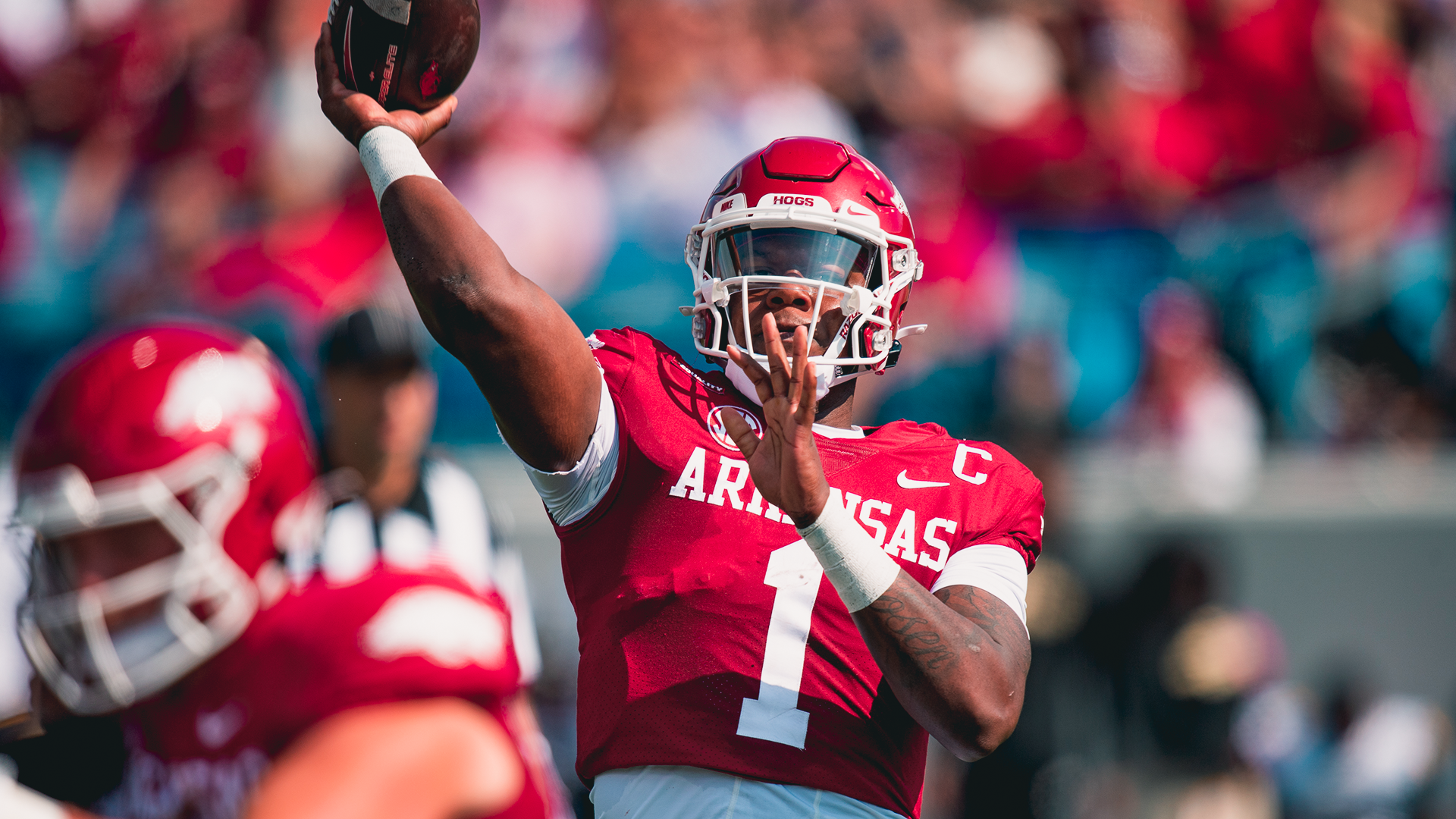 The designation makes him eligible to be voted as one of 16 semifinalists for the Davey O’Brien National Quarterback Award, which is presented annually to the best collegiate signal-caller.

Vote for KJ Jefferson of @RazorbackFB to be a semifinalist for the Davey O’Brien National Quarterback Award by liking this post. The top five vote getters on Twitter, Instagram and Facebook with receive bonus committee votes each week. #DaveyQBs @ArkRazorbacks pic.twitter.com/Cdln0rbgUt

Through eight games this season, Jefferson has thrown for 1,657 yards and 15 touchdowns while also running for 419 yards and five scores. The Razorback quarterback currently leads the SEC and ranks eighth nationally in average yards per completion (15.1).

Jefferson, who is one of only two SEC signal-callers — and one of only six in the FBS — with 1,600-plus passing yards and 400-plus rushing yards on the year, is the first Razorback quarterback to have multiple games with at least two rushing touchdowns in the same season since at least 1997. He is also the first Arkansas quarterback to rush for 300-plus yards in a season since Matt Jones in 2004.

The Sardis, Miss., native delivered an electrifying performance on the road at Ole Miss earlier in October, throwing for 326 yards and three scores while rushing for 85 yards and three more scores. He is one of only six SEC players since 2000, along with Texas A&M QB Johnny Manziel, Mississippi State QB Dak Prescott, Ole Miss QB Chad Kelly, LSU QB Joe Burrow and Ole Miss QB Matt Corral, to throw for three or more touchdowns and rush for three or more touchdowns in a game.

Jefferson was even sharper in his most recent outing, completing 10-of-17 passes for 194 yards and four touchdowns in Arkansas’ win against UAPB at War Memorial Stadium last weekend. He is one of eight SEC quarterbacks since 2000 to throw for four or more touchdowns on 10 or fewer completions.

For the second straight year, the Davey O’Brien Fan Vote will take place on the @DaveyOBrien Instagram, Twitter and Facebook accounts. The top-five vote getters on each of the three social media platforms will receive bonus committee votes, which will be added to the ballots cast by the National Selection Committee.

To participate in the Fan Vote, fans must like the original post highlighting the quarterback on the official @DaveyOBrien social media channels. Each round of the selection process (semifinalist, finalist and winner) will offer two one-week voting periods before the winning quarterback is announced at The Home Depot College Football Awards on Dec. 9.