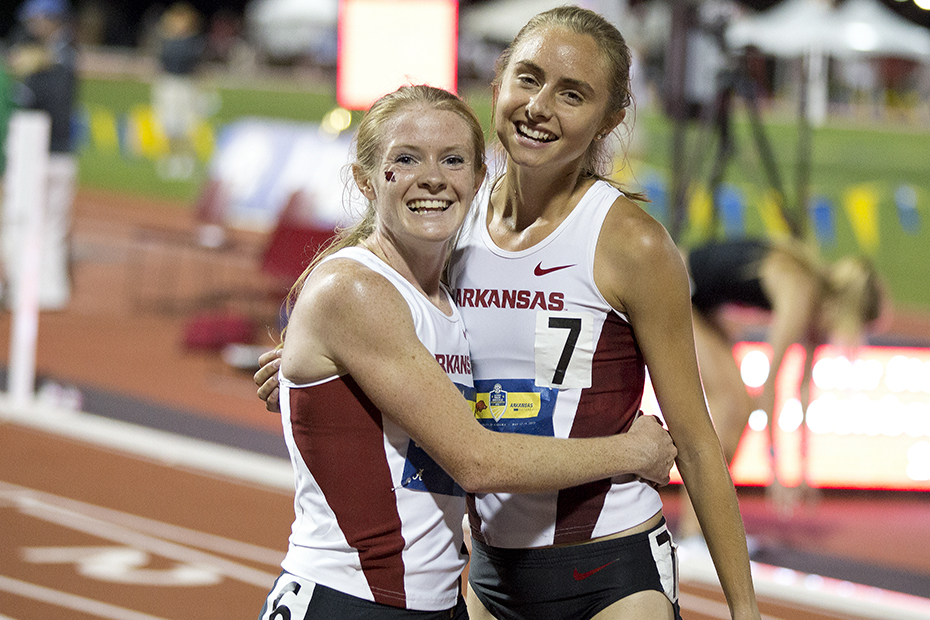 TUSCALOOSA, Ala. — Day two of the 2016 Southeastern Conference Outdoor Championships proved to be an extremely successful one for the No. 2 Arkansas women’s track and field team. The Razorbacks produced three podium-finishes, including a conference champion, as well as several event-final qualifiers.

The second day of competition was highlighted by an individual victory in the 3,000-meter steeplechase of the heels of senior Jessica Kamilos.

The returning champion in the event, Kamilos made quick work of the field, distancing herself from her competitors at the sound of the gun. A three-time All-American, Kamilos displayed veteran poise by maximizing her early lead to coast across the finish line in 9 minutes, 48.16 seconds to break the program, meet and facility records.

Kamilos is one of only two Razorbacks to win back-to-back titles in the 3,000-meter steeplechase, the other being former distance standout Grace Heymsfield who claimed the event’s top spot during the 2013 and 2014 seasons, respectively.

“It’s really special breaking Grace Heymsfield’s meet record,” said Kamilos following her outstanding performance. “She [Grace] was an amazing athlete and it’s just such an honor to be able to be running just as good as her.”

SEC Scorers
Prior to Kamilos’ 3,000-meter steeplechase title-run, Arkansas collected 20 points from the heptathlon off the efforts of Payton Stumbaugh, Taliyah Brooks, Alex Gochenour, Leigha Brown and Kelsey Herman who occupied third through seventh place in the event.

An All-American after just one season with the Razorbacks, Stumbaugh picked up where she left off during the indoor season, capping the event with a personal best performance in the 800 of 2 minutes, 14.73 seconds to earn a bronze medal.

Freshman Devin Clark also picked up some points for the Razorbacks adding six points to the team total with a third-place
finish in the 3,000-meter steeplechase.

In only her second career steeplechase competition, Clark went faced off against several SEC distance talents and came out with a new American junior record of 9:54.83 to rank the Spring Branch, Texas native third in program history and eighth in the NCAA.

Central Arizona transfer Micah Dennis was the lone field contributor of the day, scoring two points in the shot put with a toss of 15.56/51-0 ¾ on her fifth attempt which moved her up from ninth to seventh place.

Preliminary Powers
Following her bronze-medal meriting performance in the heptathlon, Stumbaugh returned to action on the track representing the Razorbacks in the first round of the 100 hurdles.

The Arkansas indoor and outdoor high hurdle record-holder made it through to Saturday’s finals section of the high hurdles with her time of 13.40.

The sprint competition was promptly followed by an exciting 1,500 race which featured two of the NCAA’s best middle distance runners in Dominique Scott-Efurd and Mississippi State’s Marta Freitas.

A three-time NCAA national champion Scott-Efurd controlled the race from the start to finish, rounding each lap with ease before splitting 63.09 on the last lap to come through as the heat two winner and earn an automatic qualifier into Saturday’s final.

Along with Scott-Efurd, Arkansas enlisted the talents of Oregon transfers Theresa Haiss and Nikki Hiltz. Both were able to navigate the field successfully, placing second in heats one and two, respectively.

Annika Sisson also made the 1,500 finals off a gutsy kick on the final straight away, moving up from sixth place to finish as the heat three runner-up.

Quarter-mile specialists Taylor Ellis-Watson and Daina Harper were the final two qualifiers of the day for Arkansas.
Ellis-Watson won heat one in 52.34 while Harper took the top spot in heat four with a 52.78.

Meet information and live results can be found at the outdoor championships central.

A live broadcast of the competition on SEC Network+ will be available Saturday, May 14 at 3:00 p.m.

The championship will also air Sunday, May 15 via tape delay from 2-4 p.m.