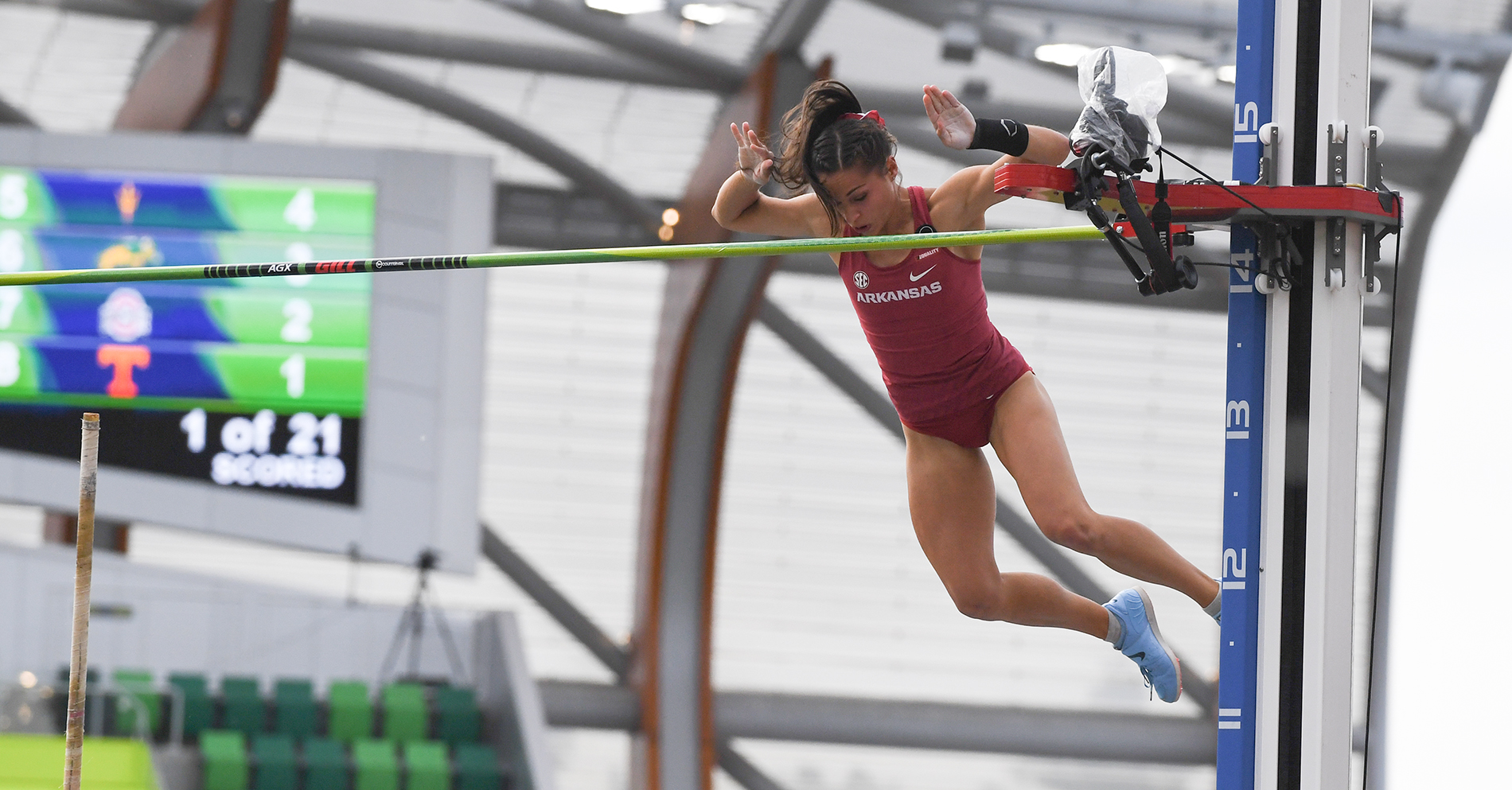 EUGENE, Oregon – A silver medal pole vault performance from Lauren Martinez and a fourth-place effort in the 10,000m by Katie Izzo highlighted the day as the Arkansas women started competition in the NCAA Championships at Hayward Field on Thursday.

Through six of the 21 finals, the Razorbacks currently have 13 points and are tied for third place with North Dakota State and Ohio State. Georgia leads the field with 20 points while Oregon is second at 14.

In addition, Arkansas advanced to the Saturday finals in the 1,500m with Krissy Gear, 800m with Shafiqua Maloney, and the 4×400 relay.

“The efforts by Lauren and Katie couldn’t have gone better, and probably exceeded expectations,” noted Arkansas women’s head coach Lance Harter. “The unfortunate thing is that Tiana Wilson, one of our mainstays, ends up tearing her Achilles in the short relay which was an event that could have possibly scored.

“She was also a major player in the 100 and 200, and obviously carried a big leg for us in the mile relay. That was a big loss and we’re just going to have to scrap together whatever we can to try to finish as high as we possibly can.”

Martinez, one of three Razorbacks in the pole vault, cleared 14-3 ¼ (4.35) on her first attempt to secure the silver medal position over East Carolina’s Sommer Knight, who needed two attempts. At the previous height of 14-1 ¼ (4.30), Martinez needed three attempts while Knight made it over on her first try.

LSU’s Lisa Gunnarsson won the title to match her winning effort at the NCAA Indoor back in March. She cleared each bar on first attempts, winning with a height of 14-5 ¼ (4.40).

Arkansas’ Mackenzie Hayward and Bailee McCorkle each cleared 13-3 ½ (4.05) in the competition. Hayward tied for 12th while McCorkle tied for 16th based on misses.

With Martinez earning a silver medal it marks the seventh time a Razorback has finished runner-up at NCAA Outdoor dating back to 2007. It’s also the 17th time in the past 18 NCAA Championships for a Razorback to score.

Izzo steadily made her way up to the lead pack throughout the course of the 10,000m final. She hit the 5k mark at 15:51.16 and then challenged for a bronze medal in the final lap.

The other final involving a Razorback was the long jump, where G’Auna Edwards placed 11th with a leap of 20-10 (6.35), which was half an inch from scoring in the event.

Maloney later anchored the Arkansas 4×400 relay to a 3:31.61 performance with a split of 51.75. The Razorbacks placed third in the semifinal heat and had the second fastest time qualifier to reach the final. The first three legs of the relay included Paris Peoples, Morgan Burks-Magee and Jada Baylark.

“The rest of the team took it upon themselves, realizing how big of a loss Tiana is, and tried to regroup as best we can and fight like we normally do as a Razorback,” noted Harter.

Also competing in the 4×100 relay, Baylark ran the second leg following the lead-off by Yoveinny Mota. Jayla Hollis and Wilson ran the third and fourth legs. Wilson suffered her injury near the finish line.

In the 100m hurdles semifinal, Daszay Freeman posted a time of 12.95 to place fifth in her heat, placing 11th overall. Hollis ran in the same heat as Freeman and ran 13.31 for seventh to place 17th overall. Mota, contending for a top two position in another heat, fell midway through the race and didn’t finish.

“Mota unfortunately clipped a hurdle, and it put her on the side of her foot and she ended up rolling her ankle,” said Harter.