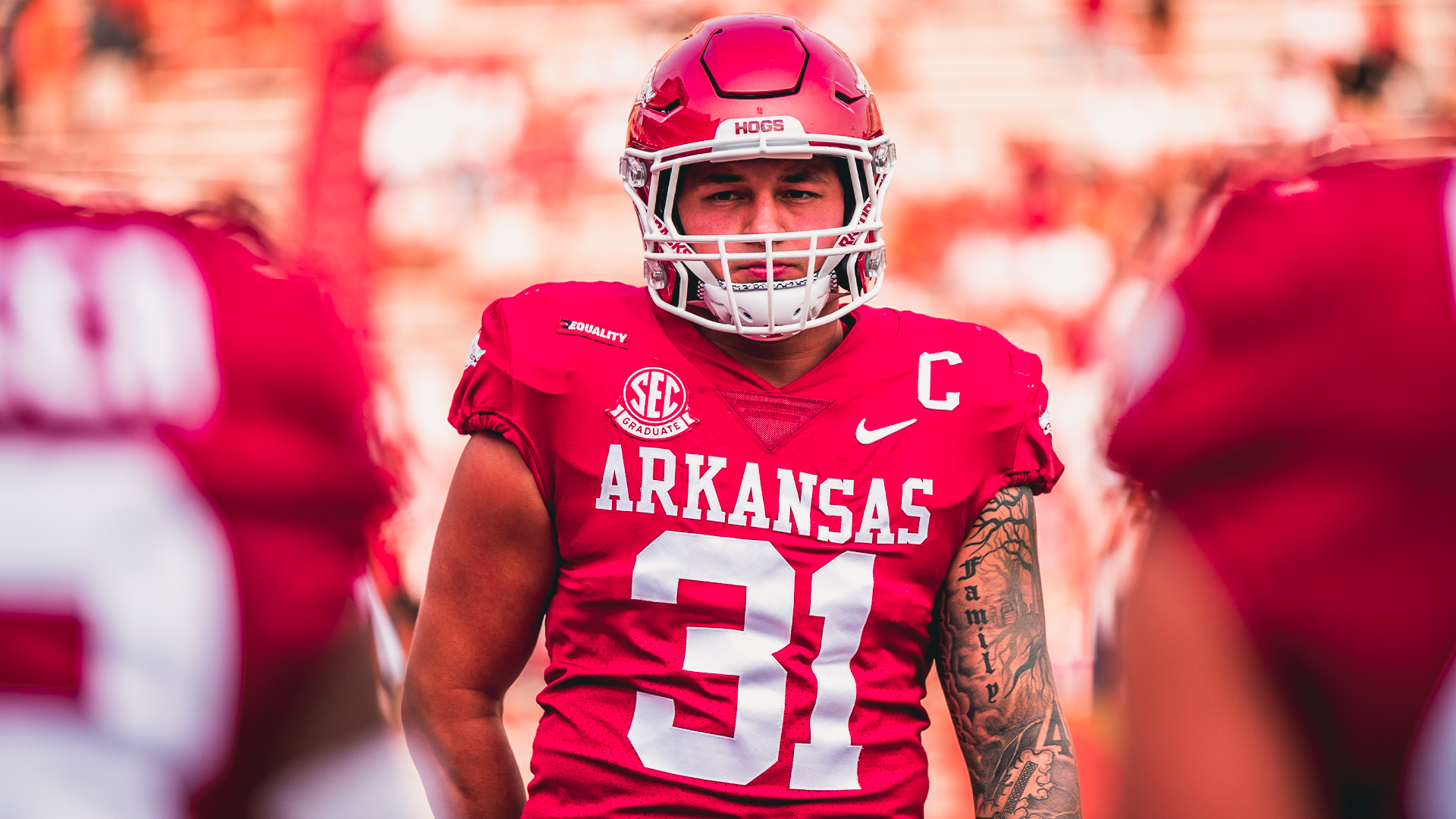 FAYETTEVILLE, Ark. – Arkansas linebacker Grant Morgan is one of three finalists for the Jason Witten Collegiate Man of the Year Award, which recognizes a student-athlete’s exemplary leadership both on and off the field.

Selected from a group of 20 semifinalists by the Jason Witten Collegiate Man of the Year Board of Directors, Morgan and the two other finalists – Kentucky defensive end Joshua Paschal and Oklahoma safety Patrick Fields – have all demonstrated an outstanding record of leadership by exhibiting exceptional courage, integrity and sportsmanship.

A leader both on and off the field.@grantmorgan15 is a finalist for this year's @WittenCMOY Award. pic.twitter.com/ZNVB3e15Zc

Morgan’s accolade-filled season includes winning the prestigious Burlsworth Trophy, given to the nation’s most outstanding player who began his career as a walk-on. The Greenwood, Ark., native emerged as one of the nation’s top linebackers as well as a two-time team captain for the Razorbacks after starting his career without a scholarship.

Morgan produced one of the greatest seasons in school history in 2020 when he was named a Walter Camp and American Football Coaches Association (AFCA) All-American after posting a team-best 111 total tackles with 7.5 tackles for loss and 2.0 sacks. He has continued to make an impact on the field in 2021, ranking second on the Hogs in total tackles (96) and third in tackles for loss (7.0) to go along with 0.5 sacks, three pass breakups and an interception.

His efforts in the classroom and in the community also made him a finalist for this year’s William V. Campbell Trophy. Morgan, a member of the SEC Football Community Service Team in 2020, was one of 13 finalists for the award – better known as college football’s Academic Heisman – which honors an individual as the absolute best football scholar-athlete in the nation for his combined academic success, football performance and exemplary leadership.

Leadership is a term synonymous with Jason Witten, who, in addition to becoming one of the best tight ends in the history of the sport, served as one of football’s most prominent role models during his 16-year pro career. In addition to winning the Walter Payton NFL Man of the Year Award in 2012, Witten also received the Bart Starr Award, Pro Football Weekly’s Humanitarian of the Year Award, Home Depot NFL Neighborhood MVP and the Bob Lilly Award, among many others. All of those honors have recognized his work in the community, achievements on the field and dedication to his teammates and family.

This year’s winner of the Jason Witten Collegiate Man of the Year Award will be announced at an award ceremony on Feb. 17, 2022, in Frisco, Texas. The winner will receive a $10,000 contribution in his name to his school’s athletic scholarship fund.