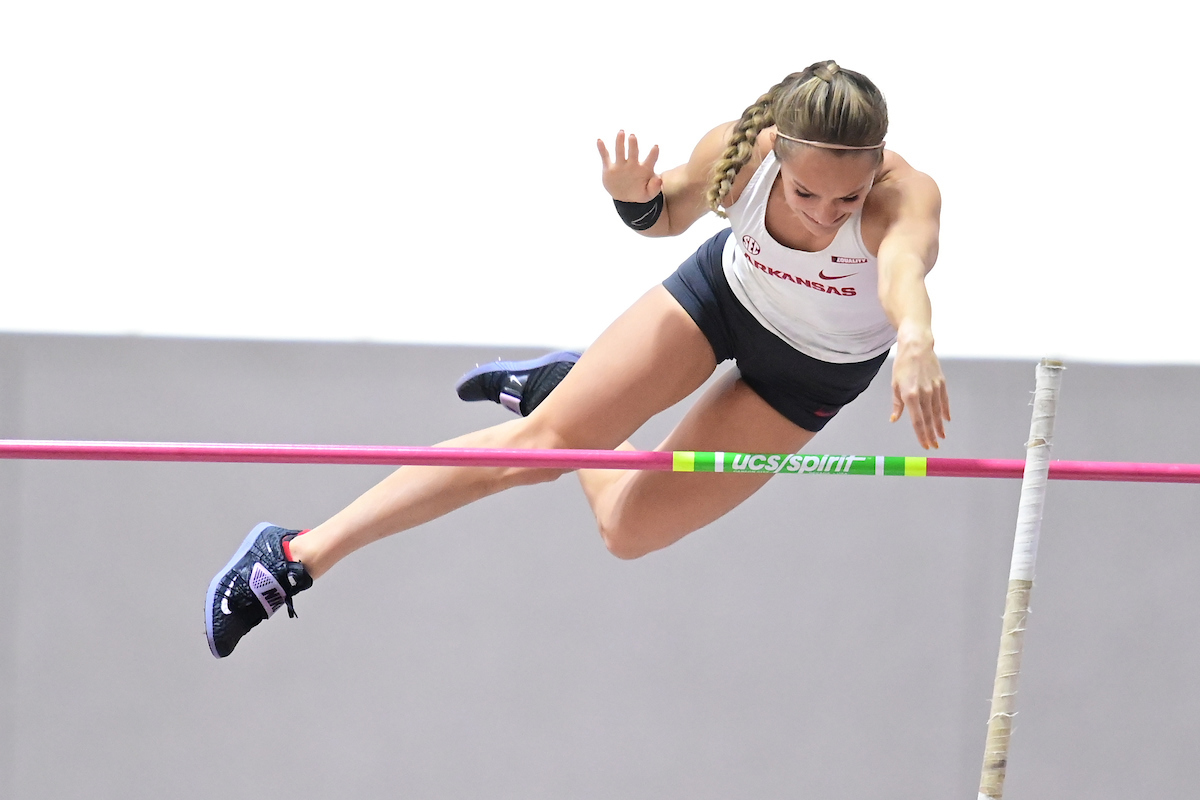 AUSTIN, Texas – Vaulting a career best of 14 feet, 9 ½ inches (4.51) enabled Razorback Nastassja Campbell to capture the University pole vault title during Friday’s action at the 93rd Texas Relays and move to No. 5 on the Arkansas all-time list.

“Winning was something big for me, because I was competing with a lot of the girls who were at indoor nationals when I finished ninth,” stated Campbell. “I thought, ‘alright, it’s time to go.’ The competition is really why I cleared those bars.”

Arkansas alum Taliyah Brooks won her third Texas Relays heptathlon with a career best score of 6,252 points, which earns her an Olympic Trials qualifier as she came within 168 points of the Olympic Games standard.

In qualifying races for the 100m hurdles and 100m another set of impressive times were generated by Razorbacks as Yoveinny Mota and Daszay Freeman advanced to the hurdle final while Tiana Wilson led qualifying in the 100 meters as she equaled the world-leading time for 2021.

On the UA all-time list, Campbell surpassed Stripling while Morris, Lexi Jacobus, Sutej and Tori Hoggard are the only Razorbacks currently ahead of her.

“The officials are all the same, I’ve jumped there since high school, and our state meet is there,” noted Campbell of the Mike A. Myers facility. “I love that runway, and it’s one of the best runways you can jump on. I didn’t really expect big things, I wanted to go in and just execute.

“When I opened up with a double PR and a really good mark, I thought ‘well, that’s awesome’. Where else was I going to jump that high if not here. It gives me really good momentum to the rest of the outdoor season.”

After placing ninth at NCAA Indoor, Campbell was eager to start the outdoor season with a better performance.

“I think NCs was definitely disappointing,” said Campbell. “My biggest goal for the indoor season was to contribute to the team title and jump 4.50 (14-9). It came two weeks late, but it came. As much as I wanted to contribute to that team win and be an All-American indoor again, sometimes pole vault takes time.”

When the bar reached 14-5 ½ (4.41), five vaulters remained in the competition. Baylor’s Tuesdi Tidwell and Sydney Horn of High Point joined Campbell in clearing the height as all three needed a third attempt to get over the bar.

“During this season I finished fourth at SEC Indoor off one miss,” noted Campbell. “When I looked at the scoreboard, I noticed I was fourth, so I said let’s figure this out. I went up a pole (at 14-5 ½) and blew through the first attempt while on the second attempt I just had a bad jump. Then on the third attempt I got it together.

“Then I felt comfortable, and I was in a good rhythm. The competition had a little to do with that, but also just feeling myself on the runway. That’s what really helped me. Once I was attempting 4.61 those were honestly my best attempts of the whole competition. Everything just came together.”

Three other Razorbacks in the pole vault event included Lauren Martinez, who placed fourth with an outdoor best of 14-1 ¾ (4.31) which ranks her No. 9 on the UA all-time list. Mackenzie Hayward and Bailee McCorkle each cleared 13-7 ½ (4.16) in placing ninth and 10th, respectively.

The second day of the heptathlon started with a bit of drama for Brooks in one of her key events, the long jump. Fouls on her first two attempts left Brooks with only one opportunity to pick up vital points. She responded with an impressive leap of 21-10 ¼ (6.66) for 1,059 points.

Brooks’ total of 6,252 ranks second on the 2021 world list and is currently the top score by an American this season. She bettered the field of collegians by 439 points, producing top marks in four of the seven disciplines (100H, high jump, 200m, long jump) while placing fourth in the three other events.

Edwards slid to fourth place overall prior to the 800m and a clocking of 2:38.95 picked up 585 points to create a career best score of 5,326 points to place fifth overall and fourth among collegians. The previous best by Edwards was a score of 4,759 from 2018.

Racing LSU’s Tonea Marshall in the second of eight heats in the 100m hurdles, Mota posted a career best of 13.04 seconds (-0.4 wind) as runner-up to a 12.87 by Marshall. With winners of each heat locking up a position in the final, Mota produced the fastest non-winning time to earn the last spot in the final.

Overall, Mota’s effort was the second fastest time among the field of 66. She improved upon her previous best of 13.25 set at altitude in 2019 and came within 0.07 of the Venezuelan national record of 12.97 set by Genesis Romero in 2019.

Her performance ranks No. 6 on the UA all-time list. On the South American all-time list, Mota is the No. 9 performer.

Generating a wind-aided time of 11.12 seconds (2.7 wind), which matched the fastest time in the world this season under all conditions, Wilson lead the qualifying field of 59 in the 100m with the second fastest time being 11.21w. Jada Baylark finished second in her heat with an 11.40 (1.9 wind), which ranked 10th overall.

Finals on Saturday are scheduled to include a host of Razorbacks and Arkansas alums among 10 events.