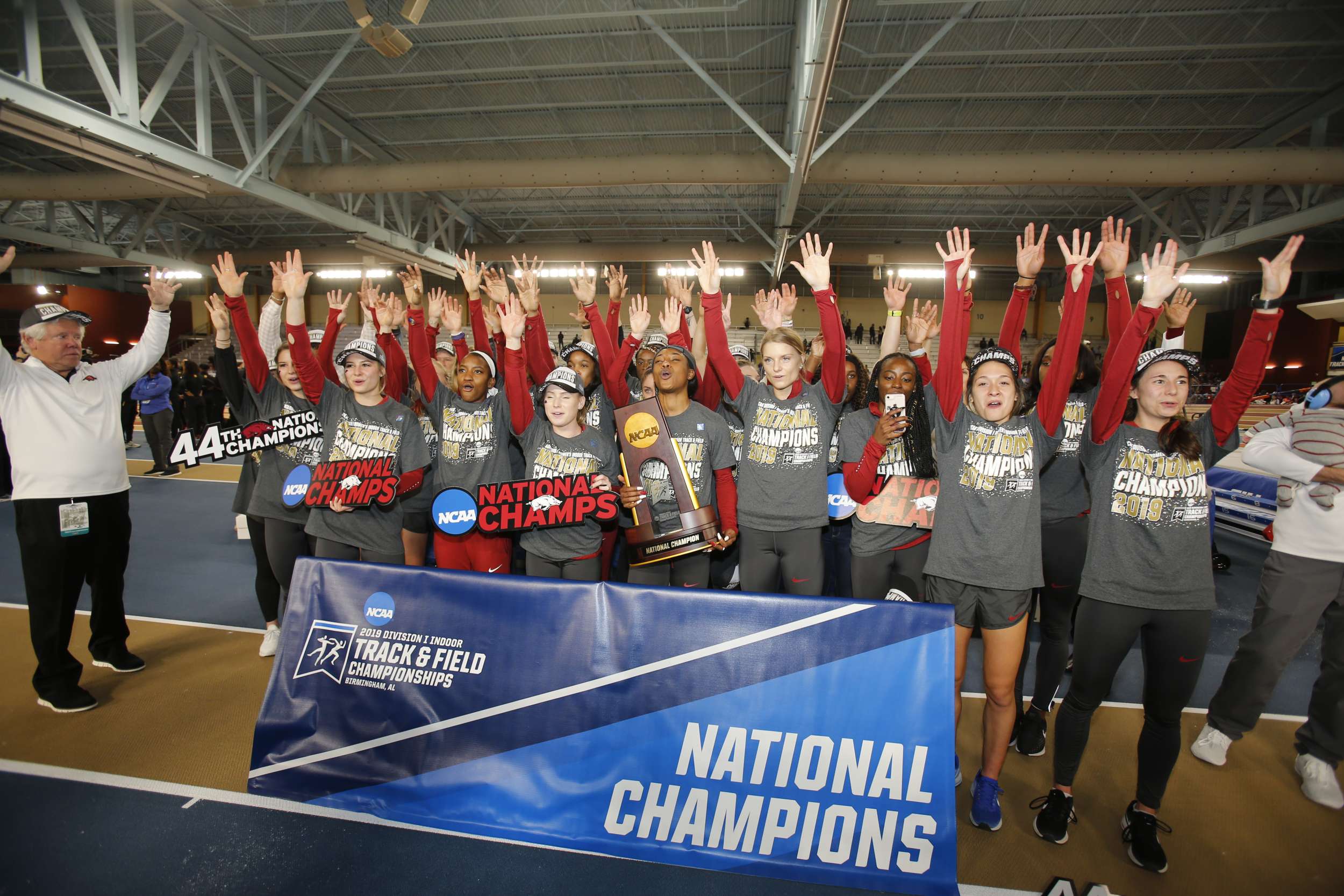 BIRMINGHAM, Ala. – Ranked No. 1 from the preseason to the NCAA Championships, Arkansas’ women’s track & field team brought home the third team title in program history, making it the 44th NCAA title between the men’s and women’s programs on The Hill. Lance Harter and crew scored 62-pts en route to the Indoor Championship while fielding 12 All-American performances in total, including back-to-back NCAA Indoor pole vault champion Lexi Jacobus.

Starting with the individual NCAA Champion, Lexi Jacobus successfully defended her Indoor title from a year ago clearing 4.61m (15-1.50) in the women’s pole vault. The senior earned her fourth NCAA title and along with Tori Hoggard concluded their final NCAA Division 1 Indoor Championships as the most decorated teammates in women’s collegiate indoor track and field history, each securing All-America honors for the fourth straight year. Hoggard took third in the event clearing 4.46m (14-7.50), while Desiree Freier finished fourth with an identical clearance of 4.46m (14-7.50).

Payton Chadwick made the first of three appearances on the track, starting first with the 60-meter hurdles. Chadwick, the defending champion in the event, finished third running 7.97 to the line for First-Team All-American honors while teammate Janeek Brown finished fifth in a quick 8.04 to earn her second First-Team All-American honor in as many years for the sophomore from Kingston, Jamaica.

Kiara Parker lined up for the finals of the 60-meters looking to add to the Razorback total. Parker crossed the line in eighth-place stopping the clock at 8.32 seconds earning First-Team All-American honors.

Chadwick returned to the track for the second of her three appearances, this time in the 200-meters. Chadwick, who entered the final with the third-fastest time from prelims, finished third in a brisk 22.99. Her time tied Southern Cal’s Tamara Clark time and had to be broken by going to the next decimal where Chadwick was a mere one one-hundredth of a second slower at 22.989 vs. 22.990.

Taylor Werner, who earned First-Team All-American honors last night in the DMR, returned to chase a national championship at 3,000-meters. Werner ran in the front pack of athletes from the start and was in position to make a move with 200-meters to go. Oregon’s Jessica Hull had just enough to outkick Werner who finished as the NCAA runner-up recording a time of 9:01.75. Gregory who returned from the Mile, earned First-Team honors as well taking seventh-place in 9:08.00.

Heading into the 4×400-meter relay, Arkansas held an eight-point lead over Southern Cal, needing only to finish sixth or better to clinch the title. The Razorbacks did not disappoint as they roared to a third-place finish running a season-best 3:30.86 that falls just outside the top-five in program history. Arkansas posted splits of 53.78 (Morgan Burks-Magee), 52.53 (Kiara Parker), 52.05 (Kethlin Campbell), and 52.51 (Payton Chadwick) over the eight-lap race.

The third-place finish secured Arkansas’ third NCAA title and the second indoor title joining the championship from 2015 in Fayetteville.

This concludes the 2019 NCAA Indoor season, Arkansas will make its outdoor debut in two weeks at the Arkansas Spring Invitational Mar. 22-23 at John McDonnell Field in Fayetteville.