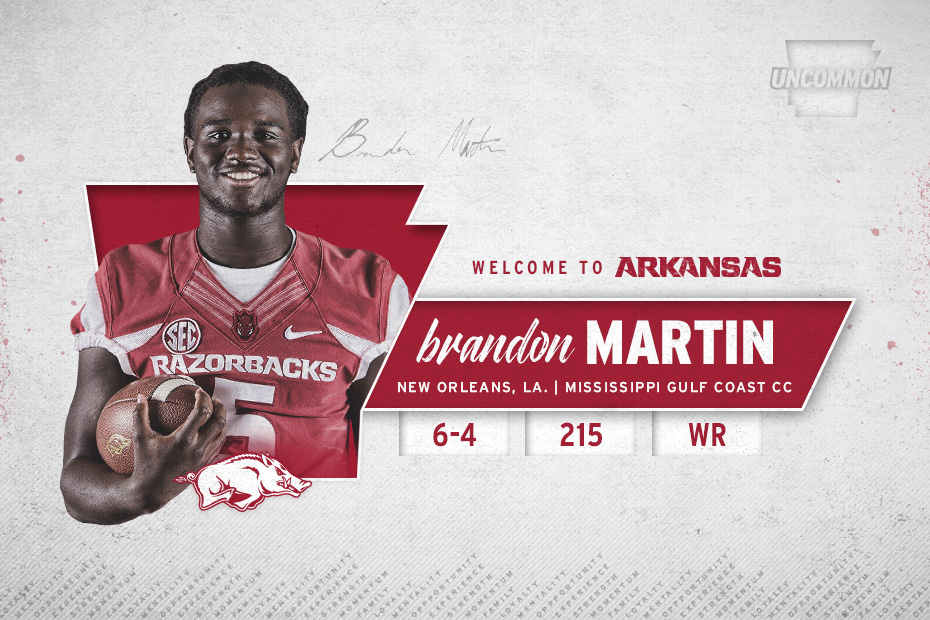 No. 1 Junior College Wide Out Signs With Arkansas

FAYETTEVILLE, Ark. – The only SEC program with a 3,000-yard passer each of the last two seasons, Arkansas added to its aerial attack on Thursday when the nation’s top ranked junior college wide receiver Brandon Martin (@b_5_live_5) signed a National Letter of Intent (NLI) to join the Razorbacks. Martin will have three years of eligibility at Arkansas after playing the 2016 season at Mississippi Gulf Coast Community College.

“Brandon has the unique combination of size and speed to maximize in the SEC,” Arkansas head coach Bret Bielema said. “He has a great family and support network that saw the type of success Arkansas can help him achieve on and off the field.”

Highlighted by his No. 2 spot on the ESPN JC50, Martin is a consensus top 10 junior college prospect and four-star recruit thanks to a No. 8 overall ranking by both Scout and 247Sports, who both have him as the No. 2 ranked wide receiver. Martin chose Arkansas over LSU, Auburn, Florida, Louisville, Georgia, Mississippi State, Arizona State and others.

A native of Monroe, Louisiana, who signed with LSU out of high school in 2015, Martin attended Wossman High School before going to Prime Prep Academy in Dallas. While at Prime Prep Academy as senior, the speedy and rangy Martin totaled 26 touchdowns with over 1,000 receiving yards en route to earning a spot in the Under Armour All-American game. Rated as a four-star prospect, Martin was the No. 111 overall prospect in the ESPN 300, including the No. 4 prospect in the state of Louisiana and the No. 12 wide receiver. Along with LSU, he was offered by Louisville, Miami, Missouri, Baylor and others out of Prime Prep Academy.

Martin and Nance join an Arkansas wide receivers room that has produced four different players with a 100-yard receiving game in SEC play over the last two seasons and three players that landed on this year’s Pro Football Focus All-SEC teams under the guidance of Bielema, offensive coordinator Dan Enos and wide receivers coach Michael Smith.

The addition of Martin at 6-foot-4, Nance at 6-foot-2 and Patton at 6-foot-6 provide Arkansas quarterback Austin Allen with big targets heading into his second year as the team’s starter. Arkansas is one of two teams to land two players in 247Sports’ top 10 list of junior college players.