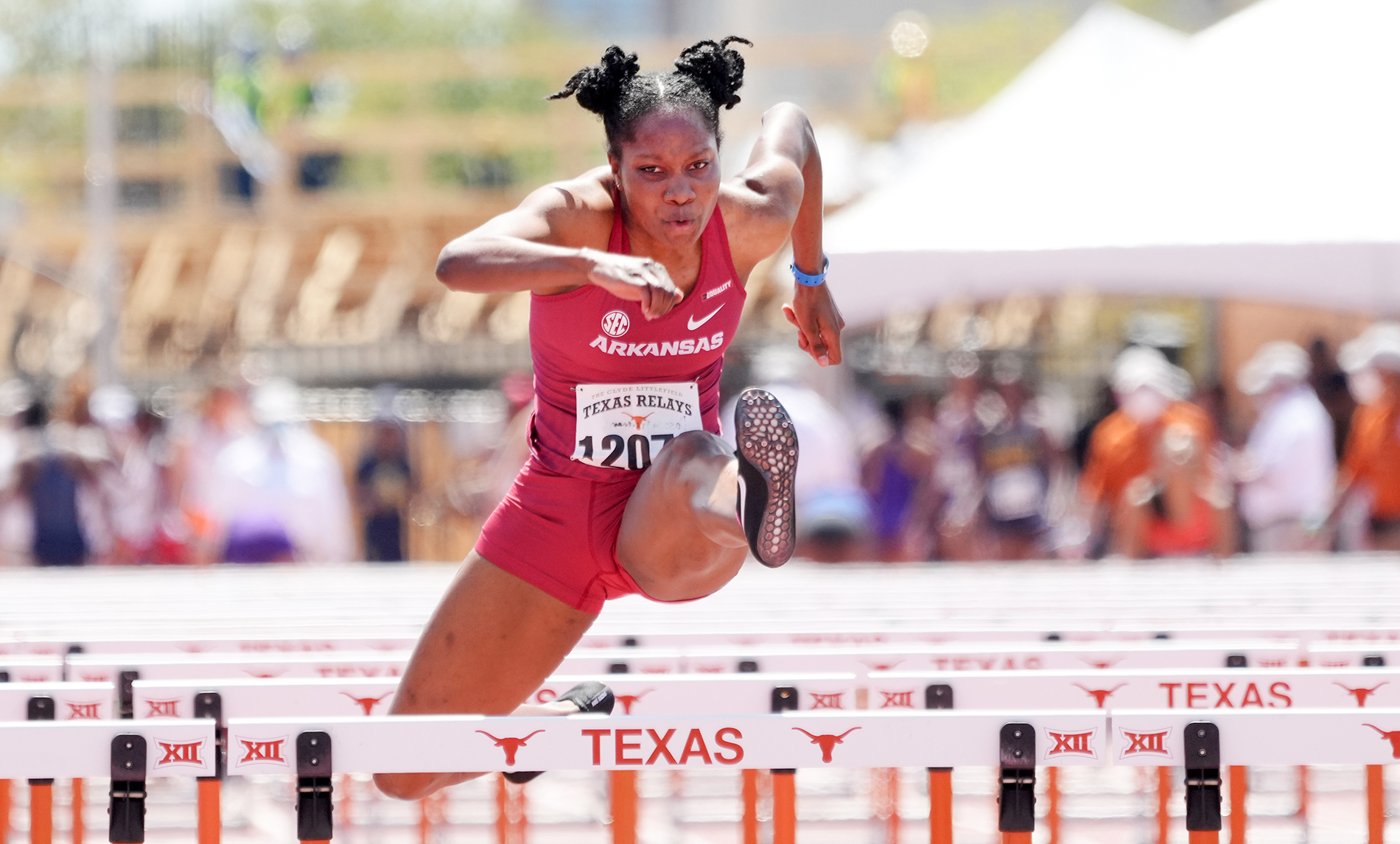 No. 4 Razorbacks compete at Texas A&M this weekend

COLLEGE STATION, Texas – Arkansas competes in the Texas A&M Team Invitational this Friday and Saturday as the Razorback sprinters, hurdlers, and vaulters return to action following a stellar performance in the Texas Relays two weeks ago.

“We’ve come off a break and have been doing some serious training,” noted Arkansas women’s associate head coach Chris Johnson. “We are in a heavy training phase right now. I would expect them to go out and compete hard. I think the result will take care of itself, but I expect them to be a little better and further ahead than they were at the Texas Relays.”

In recent USTFCCCA rankings for the outdoor season, the Razorbacks are No. 4 with the Aggies at No. 5. The top three women’s teams in the national team rating index are LSU, USC and Texas. Houston at No. 21 is the other ranked women’s team among the top 25 in the Texas A&M Team Invitational.

A crew of five Razorback vaul­ters will be competing, led by current outdoor collegiate leader Nastassja Campbell, who won the Texas Relays title with a career best of 14-9 ½ (4.51). The top six collegiate marks this outdoor season came from that competition and includes Arkansas’ Lauren Martinez in the equal fifth position.

Also vaulting for the Razorbacks are Bailee McCorkle, Kaitlyn Banas and Mackenzie Hayward. Multi-eventer G’Auna Edwards, who finished fifth in the Texas Relays heptathlon, is entered in the long jump along with the 200m and 100m hurdles this weekend.

Seven Razorbacks are slated to race in the 200m on the same track which later this season will be the host venue for the SEC Championships as well as the NCAA West Preliminary round. Indoors, the Hogs advanced three sprinters to the 200m final at the SEC meet.

“I like the way A&M set up the schedule with the 200s on the first day, and barring any catastrophes or thunderstorms, I think it will be a good race,” said Johnson. “Obviously, the track is fast so we’re looking forward to getting out there and having a good race.”

Arkansas is scheduled to run a 4×100 relay for the first time since collecting a bronze medal in the 2019 NCAA Championships in 42.79 after establishing a school record of 42.65 during the prelims.

The 4×400 relay will showcase two of the top relay teams in the nation this season with the Hogs and Aggies. Arkansas set the outdoor world-leading time with a Texas Relays victory in 3:26.63 and claimed the SEC Indoor title this year. Texas A&M broke the indoor collegiate record at the Tyson Invitational with a 3:26.27 and won the NCAA Indoor title in Fayetteville.

“A&M has a great relay and they won indoor nationals,” noted Johnson. “We have a great one as well. If both teams come healthy to the line, I think something special will happen.”

Individual races on Saturday include an Arkansas foursome in the 100m hurdles with Edwards being joined by Daszay Freeman, Jayla Hollis and Yoveinny Mota. During the Texas Relays, Mota and Freeman both set career best times of 12.97 and 13.08, respectively, which rank sixth and ninth among collegians this season. For Mota her performance equaled the national record of Venezuela.

The tandem of Morgan Burks-Magee and Shafiqua Maloney will race in the 400m while Baylark and Wilson represent Arkansas in the 100m.

Maloney set a pair of career best times two weeks ago. Her 51.72 in the final placed her second to teammate Paris Peoples (51.67) in the Texas Relays and moved Maloney closer the national record of 51.23 for St. Vincent and the Grenadines, which was set in 2014 by Kineke Alexander in San Marcos, Texas.

Wilson became the first Razorback to win the women’s 100m at the Texas Relays as she posted 11.12 twice on the weekend, with a windy version in the prelims and a then equal world-leading effort in the final. Wilson’s time currently ranks fourth in the world and second among collegians heading into meets this weekend.