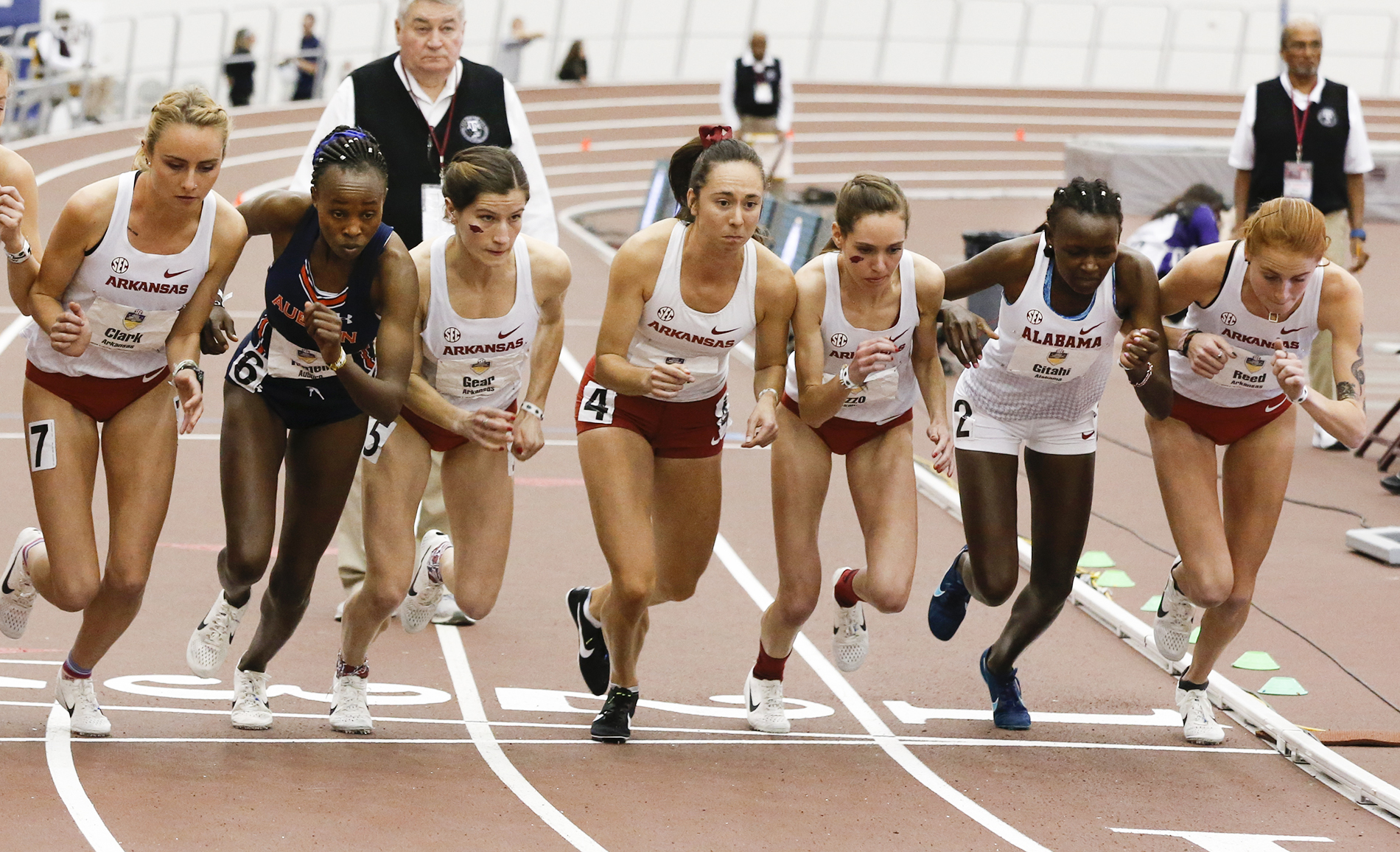 No. 5 Arkansas Ready for Challenge at NCAA Indoor

ALBUQUERQUE, NM – The No. 5 Arkansas Razorbacks, who head into the 2020 NCAA Indoor Championships as defending champions, expect to contend for a top 10 team finish this weekend in the Albuquerque Convention Center, and possibly a top four position.

“Reality does come along sooner or later,” noted Arkansas women’s head coach Lance Harter regarding the athletes the Razorbacks opted to redshirt this indoor season. “I think we’re capable of doing some good scoring but considering who we red-shirted and who we are prepping for next year it would be a long shot.

“I think we would be really happy if we’re a top 10 team, and if everything lines up perfectly, we could potentially be on the podium for one of the four team trophies.”

Arkansas has finished among the top 10 in nine consecutive years and collected a team trophy for placing among the top four teams in six of those seasons.

Teams ranked among the top five with the Razorbacks in the national team index ratings include No. 1 LSU, No. 2 USC, No. 3 Texas A&M, and No. 4 Georgia.

Distance events will provide Arkansas with a bulk of its scoring opportunities this weekend, with four athletes combining to race in three individual events, along with the distance medley relay.

Katie Izzo, the SEC Indoor Runner of the Year, will race in the 3,000m and 5,000m, the two events she claimed conference gold. Joining Izzo in the 3,000m is Carina Viljoen while Devin Clark, a SEC bronze medalist, teams up with Izzo in the 5,000m. Viljoen is also in the mile along with Krissy Gear.

Izzo is the top seed in the 5,000m with her time of 15:13.09 from December, which broke the Arkansas school record and is the second-fastest collegiate time ever. Izzo’s best of 8:55.67 in the 3,000m ranks fifth among collegians this season while an 8:56.63 for Viljoen is seeded seventh.

Arkansas’ lone NCAA Indoor champion in the 5,000m is Amy Yoder (2000) while in the 3,000m the Razorbacks have a pair of former champions in Sarah Schwald (1995) and Dominique Scott (2015). Last season Arkansas had two runners score in the 3,000m with Taylor Werner (2nd) and Lauren Gregory (7th), who are both redshirts this indoor season.

In the mile, Viljoen and Gear carry over confidence from a 1-2 finish in the SEC Indoor Championships. They will both race in the second heat of the prelims and are seeded eighth (Viljoen 4:35.33) and 12th (Gear 4:36.49). Viljoen finished fifth at the NCAA Indoor a year ago with a 4:38.51 performance.

Former NCAA mile champions for the Razorbacks include Trine Pilskog (1995) and Tracy Robertson (2001). Twice Arkansas has scored two runners in the NCAA Indoor mile final – in 2003 with Christin Wurth (3rd) and Londa Bevins (5th) as well as 2017 with Therese Haiss (5th) and Nikki Hiltz (6th).

Viljoen, Gear and Izzo have each run on the distance medley relay for Arkansas this season, but with the workload they each have in individual events other Razorbacks will fill the roles on the relay.

“In the distance medley relay, we will run a group of young people who have never been to the national meet before,” Harter explained. “We will lead off Kennedy Thomson in the 1,200m, one of our quarter-milers will fill the 400m spot, Shafiqua Maloney will run the 800m leg and we will anchor Maddy Reed.”

During the SEC Indoor, Reed finished fourth in the mile (4:44.36) as Arkansas totaled 23 points in the event. She has a best of 4:39.62 from the Husky Classic this season.

Arkansas has a pair of entries in the pole vault this weekend with Bailee McCorkle and Lauren Martinez, who both have set numerous career best heights this indoor season.

McCorkle, the SEC Indoor bronze medalist, is equal to the sixth seed in the field with a 14-7 ½ (4.46) which ranks her equal fifth on the Arkansas all-time list. Martinez, who is competing in her hometown, is seeded 10th with her best of 14-4 ½ (4.38) which ranks seventh on the Razorback all-time list.

Morgan Burks-Magee is the lone returner from the Arkansas 4×400 relay that collected a bronze medal last year. The Razorbacks currently sport the U.S. leading time of 3:32.24 with a line-up of Paris Peoples, Burks-Magee, Tiana Wilson and Rosey Effiong.

SEC champion Alabama, the world leader at 3:29.36, races in the final section of the 4×400 final along with UCLA, USC and Kentucky. Arkansas races in the second of three sections with Texas, Texas A&M and LSU.

G’Auna Edwards, the bronze medalist in the SEC pentathlon, qualified for the NCAA Indoor meet in the long jump. Her mark of 20-9 ¾ (6.34), which ranks fourth on the Arkansas all-time list, is seeded 13th. If Edwards places among the top eight, she would be just the fourth Razorback to score in the event at the NCAA Indoor.