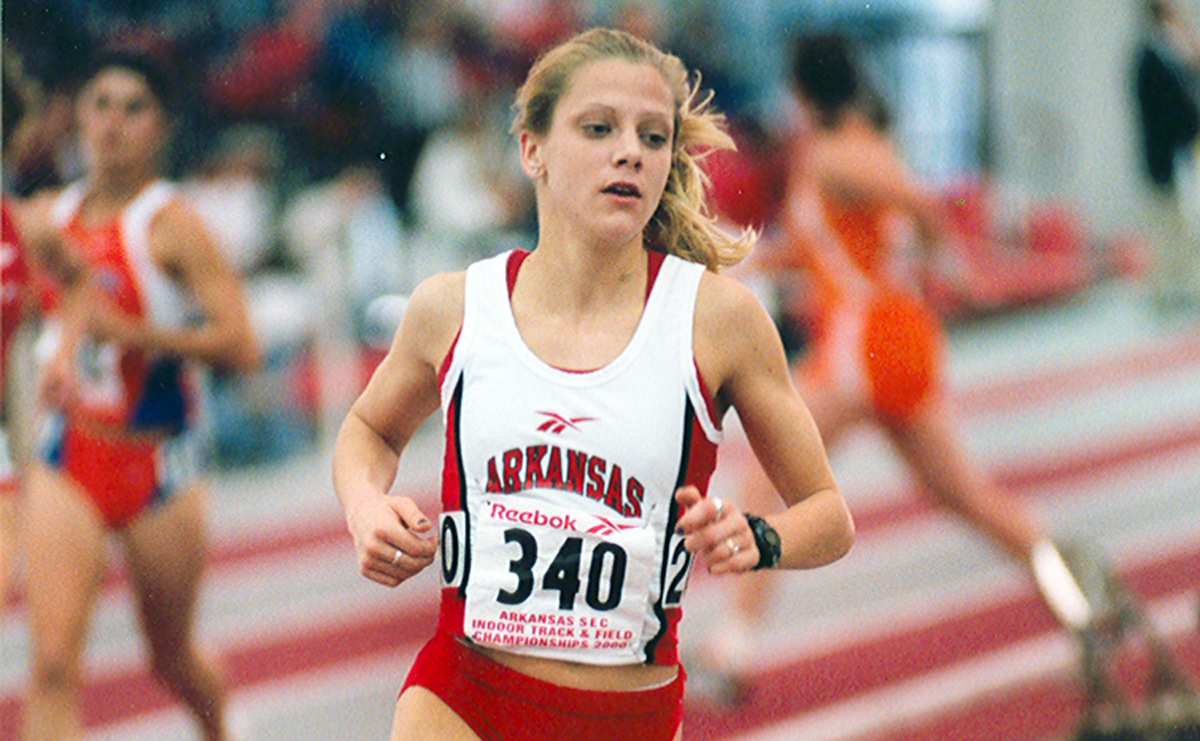 This day, April 29, in 2000, marked the first time the Arkansas women’s team claimed a Championship of America title in the Penn Relays.

In that year, Arkansas had the eighth-fastest time on the all-time collegiate list, while BYU became the fifth-fastest school and Colorado the 11th best.

The following year, the Razorbacks won the 4×1500 relay along with a pair of individual titles in the steeplechase and 10,000m.

Kleinmann established a German national record in claiming the initial college women’s 3,000m steeplechase race held at the Penn Relays in 10:01.52, bettering the field by 18-plus seconds. She challenged the collegiate record at the time, a 9:59.50 set the previous week, in becoming the second-best performer with the second-best performance on the all-time collegiate list.

Here is an excerpt from the story by Joe Juliano in the Philadelphia Inquirer on the Razorback’s first relay victory.

On a grand day for firsts at the Penn Relay, it was safe to say the women’s track teams of Arkansas and South Carolina might have had the most fun of all.

“We were gunning for the win, we wanted to win that wheel,” said Arkansas anchor Tracy Robertson, referring to the Penn Relays plaque given to the victors. “Everyone ran really well. I thought we had a better chance to win the 4×1,500 [on Friday] but we missed it. We came out strong today and ran the best we could.”

Another excerpt follows from 2001 by Joe Juliano regarding Kleinmann’s performance.

As a hurdler turned distance runner, Lilli Kleinmann had a fascination with the steeplechase, that unique combination of stamina, hurdling, and the ability to withstand a few jarring dunks into a water pit without breaking stride.

So, when the steeplechase was introduced to track and field last year as an exhibition event in the U.S. Olympic trials, Kleinmann was a willing participant. When the event made its debut last night in the Penn Relays, the Arkansas sophomore from Germany came within a few strides of a national collegiate record.

On a clear and pleasant evening at Franklin Field, Kleinmann crossed the finish line in the 3,000-meter event in 10 minutes, 1.52 seconds, beating her nearest competitor by more than 18 seconds. She fell just short of the NCAA record of 9:59.50 set last week by Elizabeth Jackson of Brigham Young.

The jumping is something that comes naturally to the 5-foot-10 Kleinmann, but she acknowledged that the frequent jarring landings over the hurdles are something she still needs to get accustomed to.

“I’m not used to it right now,” she said. “My muscles are sore. I have a bit of a hip flexor. I haven’t been doing much speed work. But the nationals are where it counts.

It’s a loaded relay team, with Kleinmann joining NCAA champion Tracy Robertson and all-American Amy Yoder Begley. But because Kleinmann and Begley, who competed in the 10,000 meters, ran last night, it remains to be seen how fresh they will be today.