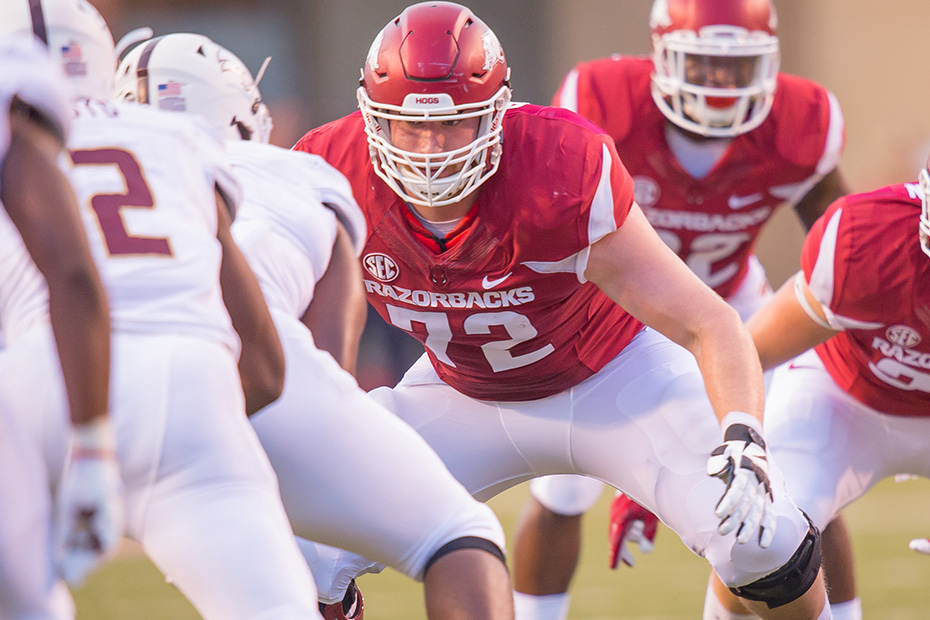 BIRMINGHAM, Ala. – Arkansas junior Frank Ragnow’s move from center to right guard against Texas State was a successful one, as the Victoria, Minnesota, native has been named the SEC Offensive Lineman of the Week, announced by the conference office on Monday morning.

Ragnow’s weekly accolade from the SEC comes one week after senior left tackle Dan Skipper earned the same award. During the last two seasons, four different Arkansas players have earned SEC Offensive Lineman of the Week, the most by any program in the league.

A Rimington Trophy Preseason Watch List member, Ragnow started the first two games of the season at center, but was moved to right guard by head coach Bret Bielema to improve communication along the right side the of the line. The move paid off, as Ragnow and the rest of the offensive line helped Arkansas rush for a season-high 226 yards and three scores on the ground as it improved to 3-0.

Ragnow graded out at a career-best 92 percent following the win, as the Razorbacks eclipsed 200 yards rushing and 200 yards passing in the same game for the fourth time in its last 10 contests. Sophomore running back Rawleigh Williams III rushed for 121 yards and two scores on 19 carries, breaking the 100-yard plateau for the second straight game while becoming the only SEC player with at least 90 yards on the ground during each of the first three weeks.

No stranger to right guard, Ragnow started all 13 games at that position in 2015. He has made 16 straight starts along the offensive line.