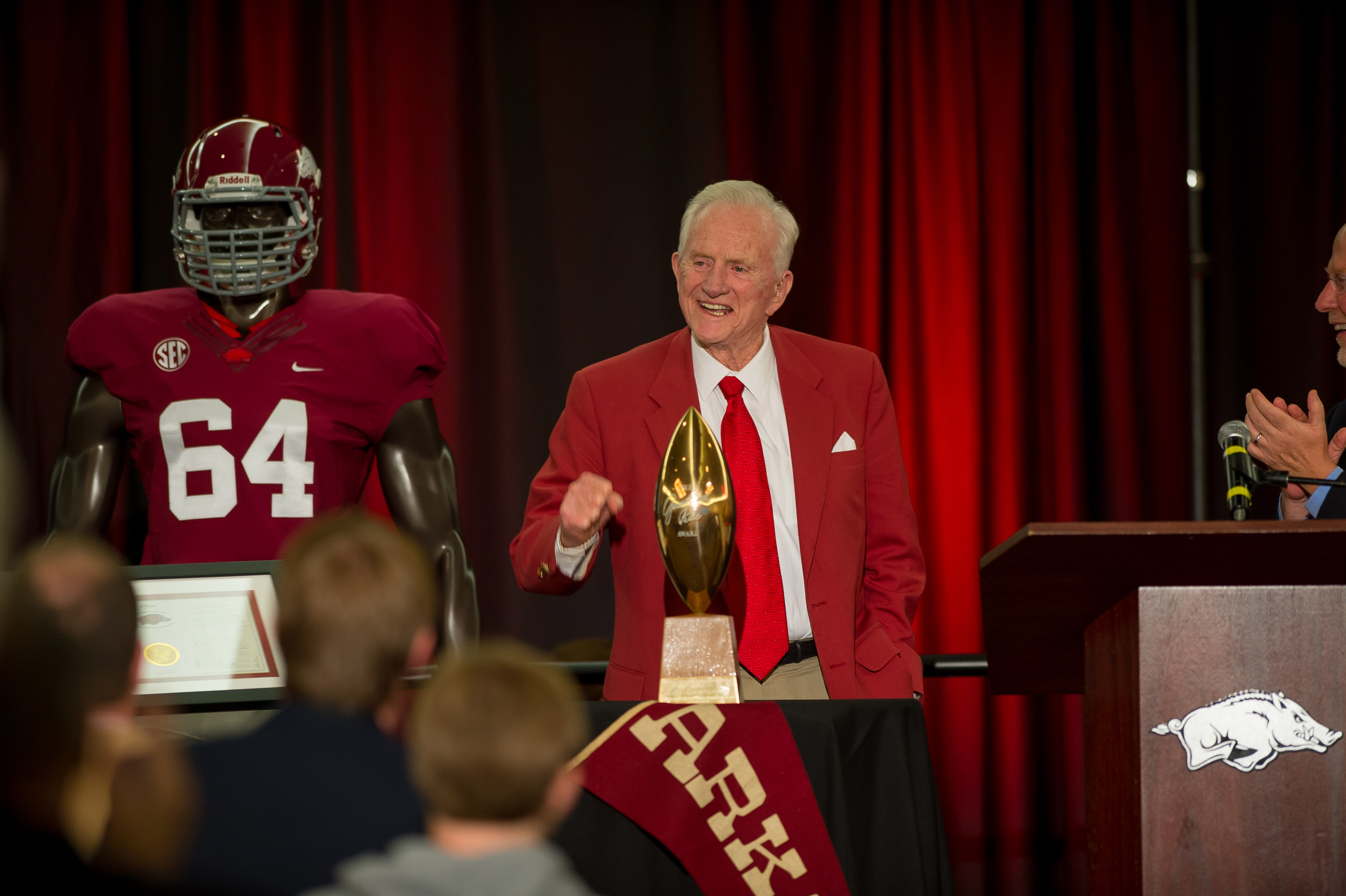 Razorback Legend to be Honored

FAYETTEVILLE, Ark. – Former Arkansas head coach Frank Broyles has been named the recipient of the AFCA’s 2018 Amos Alonzo Stagg Award.  The award is given to those “whose services have been outstanding in the advancement of the best interests in football,” and will be presented, posthumously, to Broyles at the American Football Coaches Awards show on January 9 during the 2018 AFCA Convention in Charlotte, North Carolina. Coach Broyles passed away on August 14, 2017 at the age of 92.

After playing quarterback at Georgia Tech under legendary head coach Bobby Dodd, and earning Southeastern Conference (SEC) Player of the Year honors, Broyles began his coaching career in 1947 as an assistant coach at Baylor. He would spend three years with the Bears before following head coach Bob Woodruff to Florida. After one season with the Gators, Broyles returned to Georgia Tech in 1951 to serve as offensive coordinator under Coach Dodd. Broyles assisted his former head coach for six seasons before landing his first head coaching job at Missouri. He guided the Tigers to a 5-4-1 record and a tie for third place in the Big Seven Conference in his only season at Missouri.

In 1958, Broyles landed the head coaching job at Arkansas, a place he would never leave. During his 19 years, Broyles turned the Razorbacks into a national power in college football. In only his second season, Broyles led Arkansas to 9-2 record, a share of the Southwest Conference (SWC) title and a win in the Gator Bowl. The Razorbacks added two more SWC titles in 1960 and 1961.

Broyles greatest year came in 1964 when he guided Arkansas to an 11-0 record, his fourth SWC title and a 10-7 win over Nebraska in the Cotton Bowl Classic to earn the national championship. He was named AFCA National and Regional Coach of the Year for his efforts that season. Broyles would lead Arkansas to three more SWC titles and earn three more AFCA Regional Coach of the Year honors during his tenure as head coach.

Broyles retired from coaching after the 1976 season, finishing with an overall record of 149-62-6 with 10 bowl game appearances. He still holds the Arkansas record for most victories by a head coach with 144. Before he stepped down from coaching, Broyles was named athletic director at Arkansas in 1973. He continued that post until 2007, overseeing 43 national championships, 57 SWC titles and 48 SEC championships. Broyles was instrumental in Arkansas leaving the Southwest Conference for the Southeastern Conference in 1990.

From 1977 to 1985, Broyles served as the primary color commentator for ABC Sports coverage of college football, normally alongside play-by-play man Keith Jackson. His distinct Georgian accent was easily recognizable to college football fans across the country, and he focused his commentary on the play calling and strategy of the coaches on the sidelines.

Broyles’ legacy as a great football coach and mentor is evident from his many former players and assistants who would go on to serve as head coaches themselves. Over 30 of his former players or assistants would go on to great coaching careers, including Barry Switzer, Johnny Majors, Joe Gibbs, Hayden Fry and Jimmy Johnson. The Broyles Award, which was established in 1996 to honor the former Arkansas head coach, goes to the top FBS assistant coach each year.

Broyles served on the AFCA Board of Trustees from 1964 to 1970, serving the association as president in his final year. He was honored by the National Football Foundation as the 2000 recipient of the John L. Toner Award for outstanding achievement as an athletic director and the Arkansas Democrat-Gazette named him the most influential figure in athletics in the state during the 20th century. In 2007, the field at Razorback Stadium was dedicated as Frank Broyles Field.

The Award
The Amos Alonzo Stagg Award is given to the “individual, group or institution whose services have been outstanding in the advancement of the best interests of football.” Its purpose is “to perpetuate the example and influence of Amos Alonzo Stagg.” The award is named in honor of a man who was instrumental in founding the AFCA in the 1920s. He is considered one of the great innovators and motivating forces in the early development of the game of football. The plaque given to each recipient is a replica of the one given to Stagg at the 1939 AFCA Convention in tribute to his 50 years of service to football.

Amos Alonzo Stagg
Amos Alonzo Stagg began his coaching career at the School of Christian Workers, now Springfield (Mass.) College, after graduating from Yale University in 1888. Stagg also served as head coach at Chicago (1892-1932) and College of the Pacific (1933-1946). His 41 seasons at Chicago is one of the longest head coaching tenures in the history of the college game. Among the innovations credited to Stagg are the tackling dummy, the huddle, the reverse play, man in motion, knit pants, numbering plays and players, and the awarding of letters. A long-time AFCA member, Stagg was the Association’s 1943 Coach of the Year. According to NCAA records, Stagg’s 57-year record as a college head coach is 314-199-35. He was 84 years old when he ended his coaching career at Pacific in 1946. He died in 1965 at the age of 103.