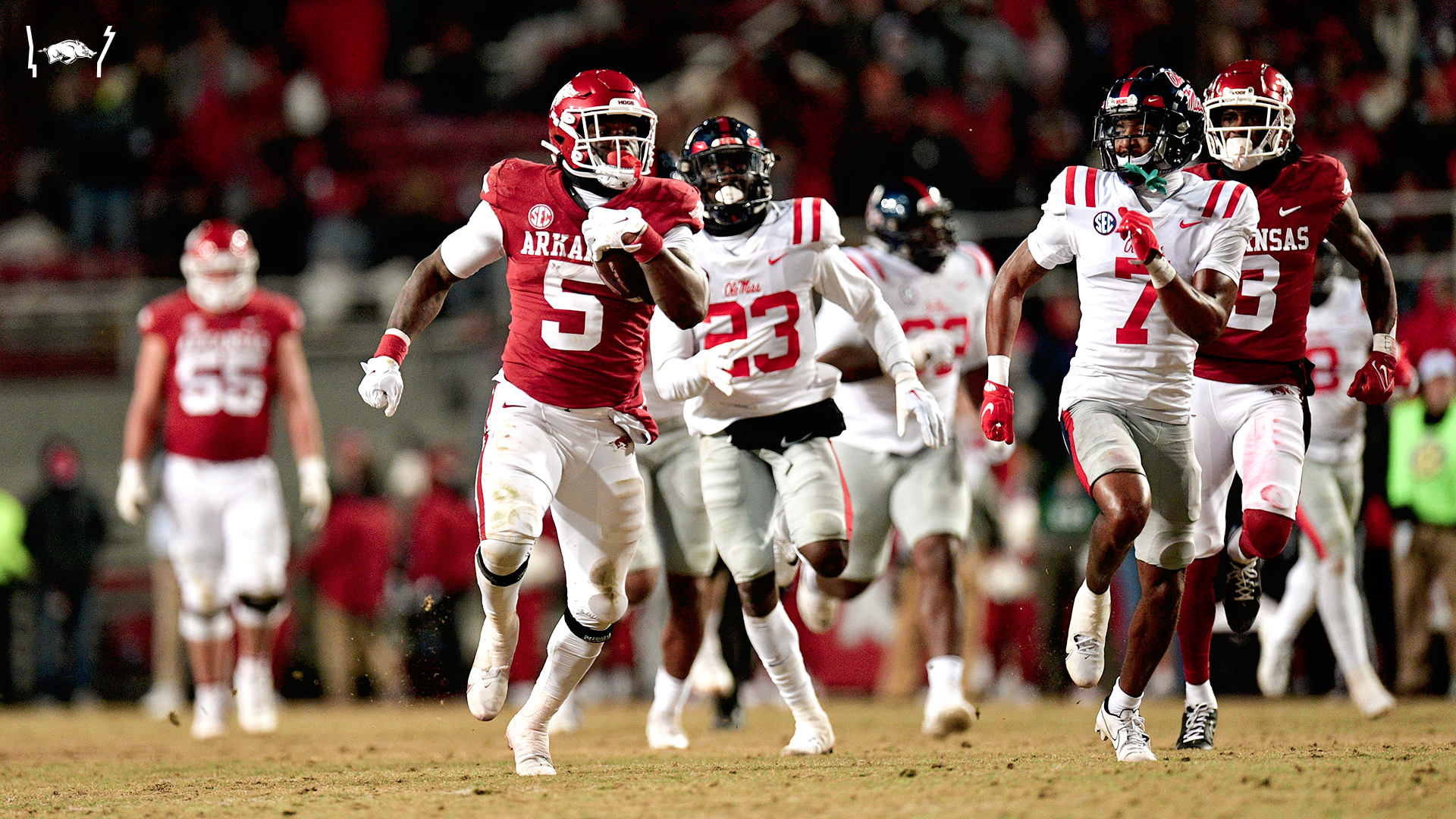 Raheim Sanders delivered a career best performance on Saturday, turning in career highs in rushing yards with 232 on 24 carries (9.7 yards per touch) and touchdowns with three. Sanders also caught a career high five passes for 29 yards against the Rebels. The Rockledge, Fla., product became the program record holder for most rushing yards in a game against Ole Miss, surpassing Fred Talley’s 214 rushing yards against the Rebels in 2000. In his dominant performance, Sanders became just the third SEC player since 2000 to rush for 200 yards and record at least five receptions in a game. Sanders burst five carries for 20+ yards and scored touchdowns on runs of 68, 20 and eight yards. Recording his first 200-yard rushing effort and seventh game of the season with 100+ yards on the ground, Sanders became the second Hog in the last 25 seasons to tally 200 rushing yards and three rushing scores against a ranked opponent, joining former Razorback RB Darren McFadden. Additionally, Sanders is the only SEC player to record 200+ rushing yards against a ranked opponent this season.

Drew Sanders led Arkansas’ defense while logging his sixth double-digit tackle game of the season with 10 stops, one interception, one fumble recovery and 0.5 tackle for loss. The Denton, Texas, native’s 12.5 tackles for loss this season are the most by a Hog defender since LB Alonzo Highsmith totaled 12.5 tackles for loss in 2011. Sanders has recorded a tackle for loss in three consecutive games. The junior came up with a crucial interception with 1:07 remaining in the second quarter, picking off an Ole Miss pass at Arkansas’ own 39-yard line and returning it for 13 yards to the Ole Miss 48 and allowing the Razorback offense to string together a touchdown drive and take a 35-6 lead into half. Sanders played a pivotal role anchoring a defense that did not allow an Ole Miss touchdown over the first three quarters.

Making his 43rd career start and playing in 68 snaps, Stromberg helped Arkansas’ offensive line dominate the line of scrimmage in the victory. Stromberg allowed zero sacks, pressures or hurries and was penalized zero times against the Rebels. The Tulsa, Okla., product paved the way for Arkansas RB Raheim Sanders, who carved up career highs in rushing yards, rushing touchdowns and receptions. The senior captain keyed an offensive line that has allowed Arkansas to have a 100-yard rusher in 10 of its last 12 games dating back to the 2021 season. The Hogs have rushed for 200 yards in an SEC-leading eight games this season behind Stromberg’s blocking. The Arkansas offense racked up 503 yards of total offense, averaging 7.7 yards per play in the win and accumulating a season high 335 rushing yards.

This week, Arkansas wraps up the regular season on Friday, Nov. 25 in Columbia, Mo., against the Missouri Tigers. Kickoff is slated for 2:30 p.m. on CBS. For ticket information, call the Razorback Ticket Center at 479-575-5151 or click here.