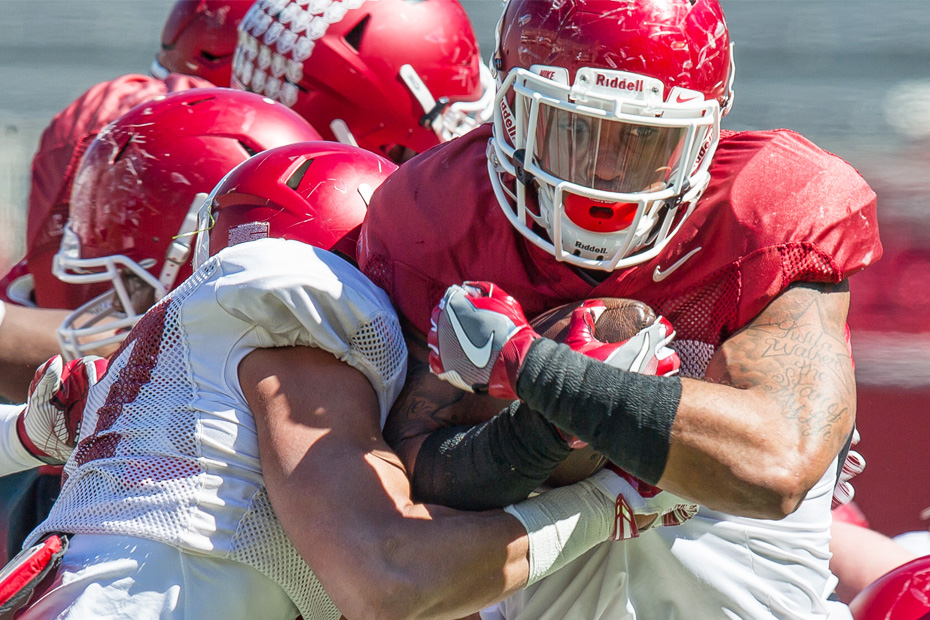 FAYETTEVILLE, Ark. – The Arkansas football team put on pads for the first time this spring as it wrapped up the first week of practice Saturday inside Donald W. Reynolds Razorback Stadium.

Saturday’s practice was the third of the week, featuring individual drills, special teams work and a 62-play scrimmage that focused on first and second down situations.

A majority of the snaps were running plays, as Arkansas’ group of running backs had a good day. A slimmed-down Kody Walker picked up 10-plus yards in each of his first two carries and totaled 40 yards on five carries. Making a position switch from wide receiver to running back this offseason, sophomore Damon Mitchell broke the longest run of the day of 30 yards. Donning No. 34 this season, junior Denzel Evans carried seven times for 56 yards while sophomore Juan Day turned his nine carries into 45 yards.

The Razorbacks will suit up again Monday for the fourth of 15 spring practices.

Arkansas will play its annual Red-White Spring Game presented by Contour by Cox on Saturday, April 23. Kickoff is scheduled for 12 p.m., in Donald W. Reynolds Razorback Stadium. The event is free and open to the public.