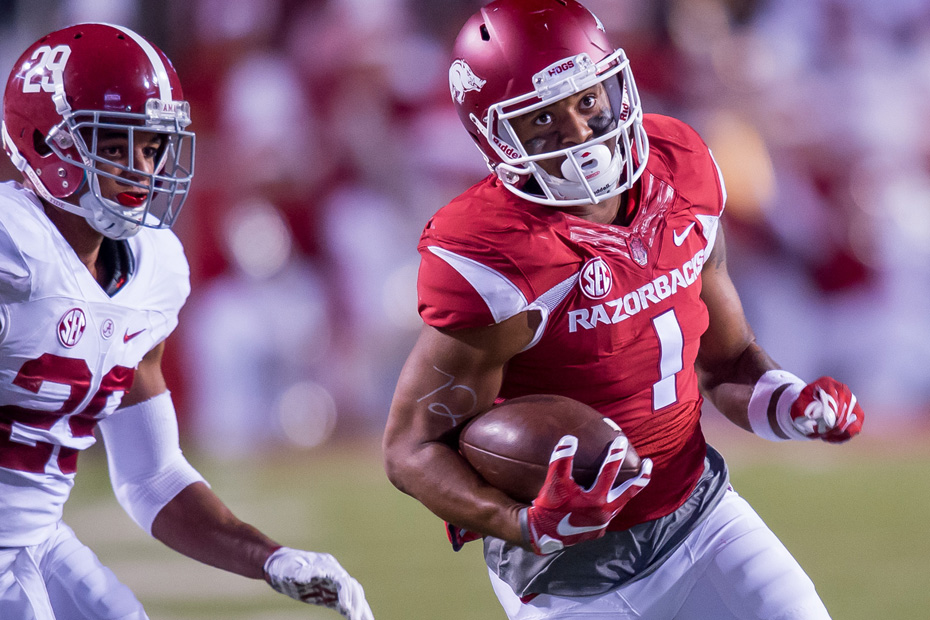 Razorbacks Fall To No. 1 Crimson Tide

Despite the setback, Allen threw for more than 200 yards for the fifth straight game and connected with his receivers for three touchdowns. Allen’s career-best 400 yards on 25-of-48 passing in the game is his second 300+ yard game this season, both outings occurring in Southeastern Conference play (Texas A&M).

With his performance Saturday night, Allen became the first Razorback to throw for 200 or more yards in five of the first six games of a season since Tyler Wilson in 2011 and totaled the most passing yards against Alabama in school history.

He also became the first Arkansas quarterback and one of five SEC quarterbacks to throw multiple touchdown passes in each of the first six games of a season.

Jared Cornelius led all Arkansas receivers with a career-high 146 yards on five catches, including a long 57-yard reception in the first half. It was Cornelius’ third straight game of 100 yards or more receiving.

Wide receiver Keon Hatcher and tight end Jeremy Sprinkle pulled in the touchdowns for the Hogs. Hatcher hauled in two touchdown catches of 16 and 10 yards in the second and third quarter. It marks his second career multi-TD game, his first of the season.

As for Sprinkle, his touchdown grab came back in the first half that, at the time, made it just a 14-7 Alabama lead. Allen was able to connect with Sprinkle from 24 yards out for Arkansas’ first touchdown of the game and was Sprinkle’s fourth touchdown of the season.

Defensively, senior linebacker Brooks Ellis led the team with eight tackles, four as solo stops, as well as one pass breakup. As a whole, Arkansas’ defense forced three turnovers, but gave up 517 yards of offense as Jalen Hurts passed for 253 yards with two scores. On the ground, Alabama was led by Damien Harris, who carried the ball 13 times for 122 yards.

Arkansas kept the game within one score after the first quarter with some help from the Sprinkle touchdown catch. However, Alabama scored two more times before the midway point of the second quarter, one coming off a 23-yard fumble return. Arkansas was only able to kick a field goal and the first touchdown from Hatcher to cut the lead to 35-17 before halftime.

Both offenses slowed in the second half as the Crimson Tide scored one touchdown in the third and fourth quarters and got its second defensive touchdown of the night when Allen was intercepted in the end zone by Minkah Fitzpatrick, who, in turn, took it back 100 yards for the score.

The Razorbacks kept grinding in the fourth quarter to try and make it a two score game after Rawleigh Williams III scored on a 3-yard rush, making it 49-30, but with under three minutes remaining, the Hogs couldn’t get in the end zone again before time expired.

– Allen became the first Arkansas quarterback since joining the SEC (1992) to throw 15 touchdown passes through the first six games of a season.

– Keon Hatcher has hauled in a touchdown pass in 14 career games, the second most among active SEC players.

– Hatcher passed Greg Childs and moved into a tie for 7th place all-time in school history with his 15th and 16th career touchdown receptions.

– With 1.0 tackles for loss against Alabama, Taiwan Johnson has now recorded at least 0.5 tackle for loss in three straight games and six of his last seven games. He now has 16.0 career tackles for loss, third-most among active Arkansas players.

Up Next
The Razorbacks are back at Donald W. Reynolds Stadium next week when they No. 14 Ole Miss in another SEC Western Division matchup. Kickoff will be either at 6 p.m. on ESPN.