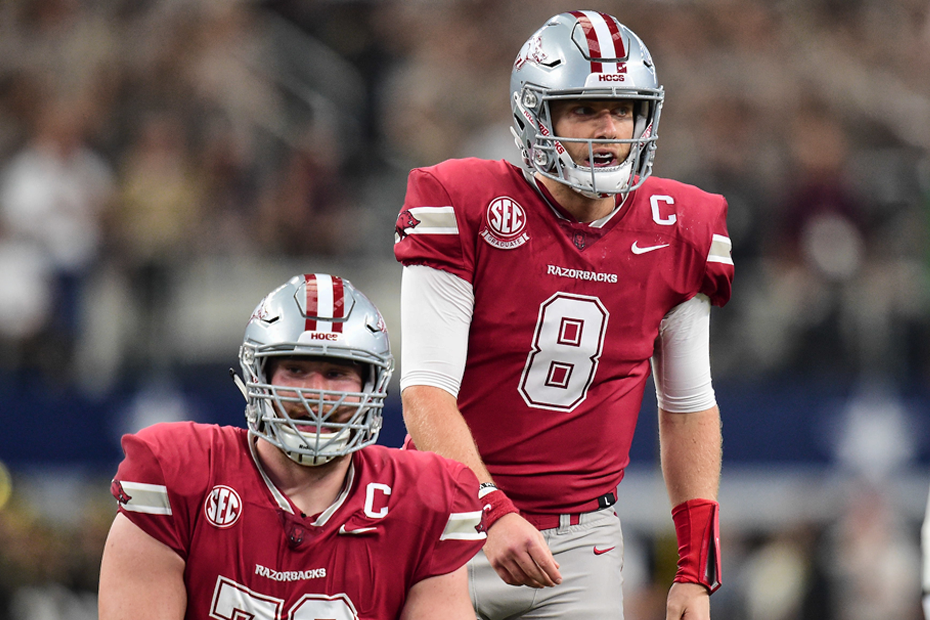 ARLINGTON, Texas — A 457-yard offensive performance was not enough Saturday afternoon as the Texas A&M Aggies defeated Arkansas, 50-43, in overtime at AT&T Stadium.

Austin Allen capped a seven-play 65-yard drive with a six-yard touchdown pass to Jared Cornelius on the first possession of the game for the Razorbacks. Cornelius finished the day with 35 yards on three receptions.

After Texas A&M tied the game in the first quarter, Arkansas responded with its second long drive of the day. With redshirt freshman Cole Kelley in the game, the Razorbacks were able to take a 14-7 lead off of a 2-yard pass to David Williams. It was the only completion of the day for Kelley, as he went 1-for-2 for two yards and a touchdown through the air. The young quarterback also had 21 yards on four rushes.

Senior Henre’ Toliver put Arkansas’ offense in scoring position with an interception on Texas A&M’s 30-yard line early in the second quarter. It was the second interception of the season for Toliver and the only turnover for the Razorback defense Saturday.

Freshman Chase Hayden scored two plays following Toliver’s interception from two yards out to give Arkansas a 14-point lead early in the second quarter. Hayden was Arkansas’ leading rusher Saturday afternoon, finishing with 77 yards on 13 carries with one touchdown.

David Williams scored for the second time Saturday afternoon, this time a rush from one yard out to give the Razorbacks a 28-24 lead over the Aggies. It marked the third time Williams has had a multi-touchdown game in his career, and second this season after having two rushing touchdowns against Florida A&M.

In a back-and-forth fourth quarter, Jonathan Nance beat double coverage to score off a 44-yard pass from Austin Allen. It’s the second long touchdown from Allen in as many games for Nance, after scoring on a 49-yard pass against TCU. Nance had his first 100-yard receiving performance as a Razorback, finishing with 100 yards on three receptions.

David Williams scored for the third time Saturday afternoon, this time from 3-yards out to give Arkansas the lead once again. Williams finished the afternoon with two rushing touchdowns and one receiving, marking the first time Williams has had three touchdowns in a single game in his career. The graduate transfer finished with 68-yards on 11 carries while also having 28 yards receiving.