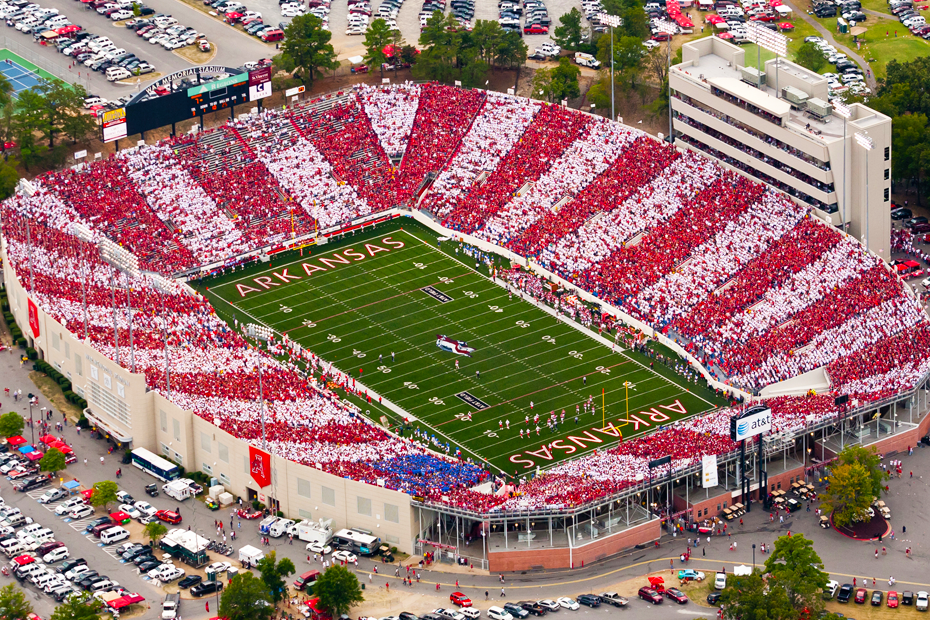 Arkansas will play the University of Missouri in a Southeastern Conference game at War Memorial Stadium during the 2019, 2021 and 2023 seasons, unless SEC scheduling necessitates playing another opponent. The matchup has traditionally been played on the Friday or Saturday following Thanksgiving.

The University of Arkansas will also seek waivers from the SEC to play its spring football game at War Memorial Stadium in 2020, 2022 and 2024. Current SEC legislation prohibits league schools from hosting off-campus spring football games without a waiver from the conference. Arkansas submitted and received a waiver to play its 2018 spring game at War Memorial Stadium, based on ongoing construction at Donald W. Reynolds Razorback Stadium.

The agreement includes mutually agreed upon stadium facility improvements and enhancements to be made prior to the 2019 regular season game at War Memorial Stadium as well as ticket sales and revenue benchmarks for SEC games.

“A big part of our mission as a university is to make lives better for Arkansans. That means a lot of things including recruiting students from every part of our state, providing transformational opportunities, solving problems through research and discovery, and contributing service through collaboration. But it also means engaging the entire state. The Arkansas Razorbacks are a tremendous source of pride for the University of Arkansas and the state, and will always be a big part of that engagement. We’re excited to continue the tradition of playing at War Memorial Stadium. I’d like to thank Hunter Yurachek for his due diligence throughout the process while also including what is sometimes overlooked in a decision like this – the decades of fond memories and strong emotions so many Razorback fans share related to the Razorbacks playing in Little Rock. I’d also like to thank the many people who provided their input and guidance that led to this decision, and especially Governor Hutchinson, Arkansas Parks and Tourism, the War Memorial Stadium Commission, University of Arkansas System leaders and others who helped to continue the connection between War Memorial Stadium and the Arkansas Razorbacks.”

“For 70 years, University of Arkansas football games at War Memorial Stadium have been a part of our program’s rich history and our state’s heritage. We are pleased that through our partnership with the Arkansas Department of Parks and Tourism, we will be able to continue this Razorback tradition while also ensuring our program is in position to compete successfully in the SEC and nationally. Throughout this process, I sought and listened to many passionate Razorbacks from every corner of our state and beyond. While those conversations provided varying perspectives, they collectively reaffirmed my belief that this state is unified in our desire to see the Razorback program succeed. I am appreciative of the support provided by Chancellor Steinmetz and the leadership of the University of Arkansas as well as the constructive dialogue throughout this process with Governor Hutchinson, Kane Webb and others who worked diligently to make this agreement a reality.”

“I think this agreement speaks very highly of the University of Arkansas. In an era in which money seems to be the driving force behind every major decision in big-time college athletics – and it doesn’t get any bigger time than SEC football – this wasn’t a money decision. It required an appreciation and understanding of tradition and culture and a willingness to be uniquely Arkansas.”

“As Chairman of the War Memorial Stadium Commission, I am both excited and grateful that Razorback games will continue in Little Rock. This announcement reflects the continuation of a successful partnership between the U of A and War Memorial that has lasted 70 years. I appreciate the efforts of all who made this happen, especially Governor Hutchinson, Chancellor Joe Steinmetz and Athletic Director Hunter Yurachek.”