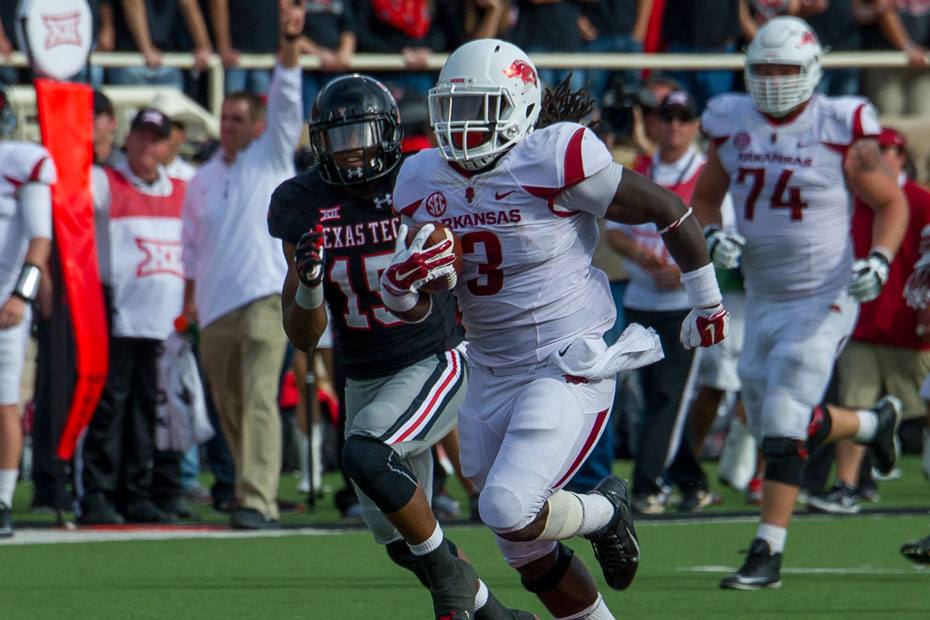 Arkansas returns to Fayetteville to host former Southwest Conference rival Texas Tech on Saturday. The Razorbacks are looking to bounce back with a victory before beginning SEC play next week.

The Series
This will be the 37th time that Arkansas and Texas Tech have met and the first time the two have played in Fayetteville since Oct. 13, 1990. The Razorbacks played the Red Raiders every year from the time Texas Tech joined the SWC in 1957 until Arkansas left for the SEC following the 1991 season.

Last year, the two schools renewed the rivalry with a home-and-home series. Arkansas took the first game down in Lubbock with a 49-28 thrashing of Texas Tech. The Razorbacks rushed for 438 yards as a team. Jonathan Williams ran for four touchdowns, tied for the fifth-most in a single game in school history. Alex Collins rushed for 212 yards, the ninth best single-game total ever posted by a Razorback.

The Opponent
Texas Tech is an up-tempo, spread offense team that throws the ball all over the field. In last year’s meeting against Arkansas, the Red Raiders passed the ball 67 percent of the time. Offensively they are led by quarterback Patrick Mahomes, who has already passed for 786 yards and eight touchdowns after the first two weeks of the season. Slot receiver Jakeem Grant is only 5-foot-7, 168 pounds, but is incredibly talented and difficult to cover and tackle in space.

The Red Raiders have struggled defensively. Last year, they were statistically the worst defense in the Big 12. They have a different defensive coordinator and new philosophy since Arkansas traveled to Lubbock last year, but still gave up 45 points in the season opener to Sam Houston State. They got back on track last week, limiting UTEP to under five yards per carry and 20 points.

Connections
There are several connections between the two programs as Arkansas has 19 players from the state of Texas. The Razorbacks’ starting kicker, Cole Hedlund, and Texas Tech wideout Ian Sadler were teammates at Argyle High School in Argyle, Texas.

Arkansas’ linebackers coach, Vernon Hargreaves, served as the linebackers coach under David Gibbs at Houston the past two sesaons. Gibbs is currently in his first season as Texas Tech’s defensive coordinator and served in the same capacity at Houston.

News & Notes
– Bret Bielema is 35-3 (.921) in his head-coaching career in non-conference games. He was a perfect 28-0 in non-conference home games before last week’s loss to Toledo.
– Saturday’s showdown features two starting quarterbacks that have combined to throw for over 1,500 yards with over 150 pass attempts through the first two weeks of the season.
– Brandon Allen is one of just nine FBS quarterbacks to throw for 300+ yards in each of the first two weeks of the season.
– Allen’s 720 passing yards is the most by an Arkansas quarterback in the first two games of any season in program history.
– Allen is just the third player in school history to open the season with back-to-back 300-yard passing games.
– Arkansas has held its opponents to 17 points or less in seven of its past eight games.
– The Razorbacks have allowed just 7.5 points per game in their past four games at Donald W. Reynolds Razorback Stadium.