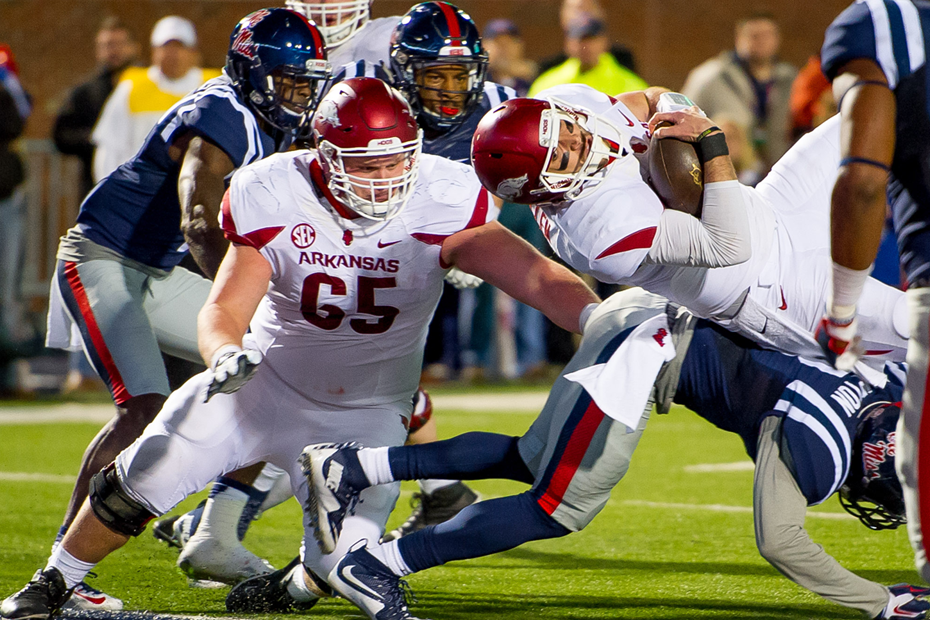 OXFORD, Miss. – Behind the arm of senior quarterback Brandon Allen and his career-high 442 passing yards and six touchdowns, Arkansas took down No. 19 Ole Miss 53-52 at Vaught Hemingway Stadium Saturday.

Tied 38-38 with 10:30 left in the contest, Ole Miss forced the Razorbacks to punt for the first time in their previous five drives. And the Rebels took advantage of the stop. Ole Miss quarterback Chad Kelly led the Rebel offense 81 yards down the field in six plays, capping the drive with an 18-yard go-ahead scoring toss to junior wide receiver Quincy Adeboyejo.

But Allen and the Razorbacks responded. The senior signal caller connected with Dominique Reed for a 17-yard game-tying touchdown with 53 seconds left in the game.

After the Rebels turned it over on downs on the ensuing possession, the Razorbacks attempted a 47-yard game-winning field goal, but it was blocked by Ole Miss defensive back Tony Bridges, sending the contest to overtime.

It took the Rebels just three plays to find the end zone in the first overtime period to take a 52-45 lead.

Facing a fourth-and-25 situation, tight end Hunter Henry reeled in a 14-yard pass from Allen, then flipped the ball backwards as he was being tackled. Collins picked it up and ran it 26 yards to the Ole Miss 11 to extend the drive and the game.

Two plays later, Allen connected with junior wide receiver Drew Morgan in the end zone for the third time in the game.

Head coach Bret Bielema decided to go for two. Allen was sacked on the initial attempt, but a facemask penalty against Ole Miss would give the Razorbacks another chance.

On the second two-point conversion attempt, Allen dove into the end zone on a 1-yard keeper to lift the Razorbacks over the Rebels 53-52.

The Razorbacks head to LSU next week before facing Mississippi State at Donald W. Reynolds Razorback Stadium on Nov. 21.