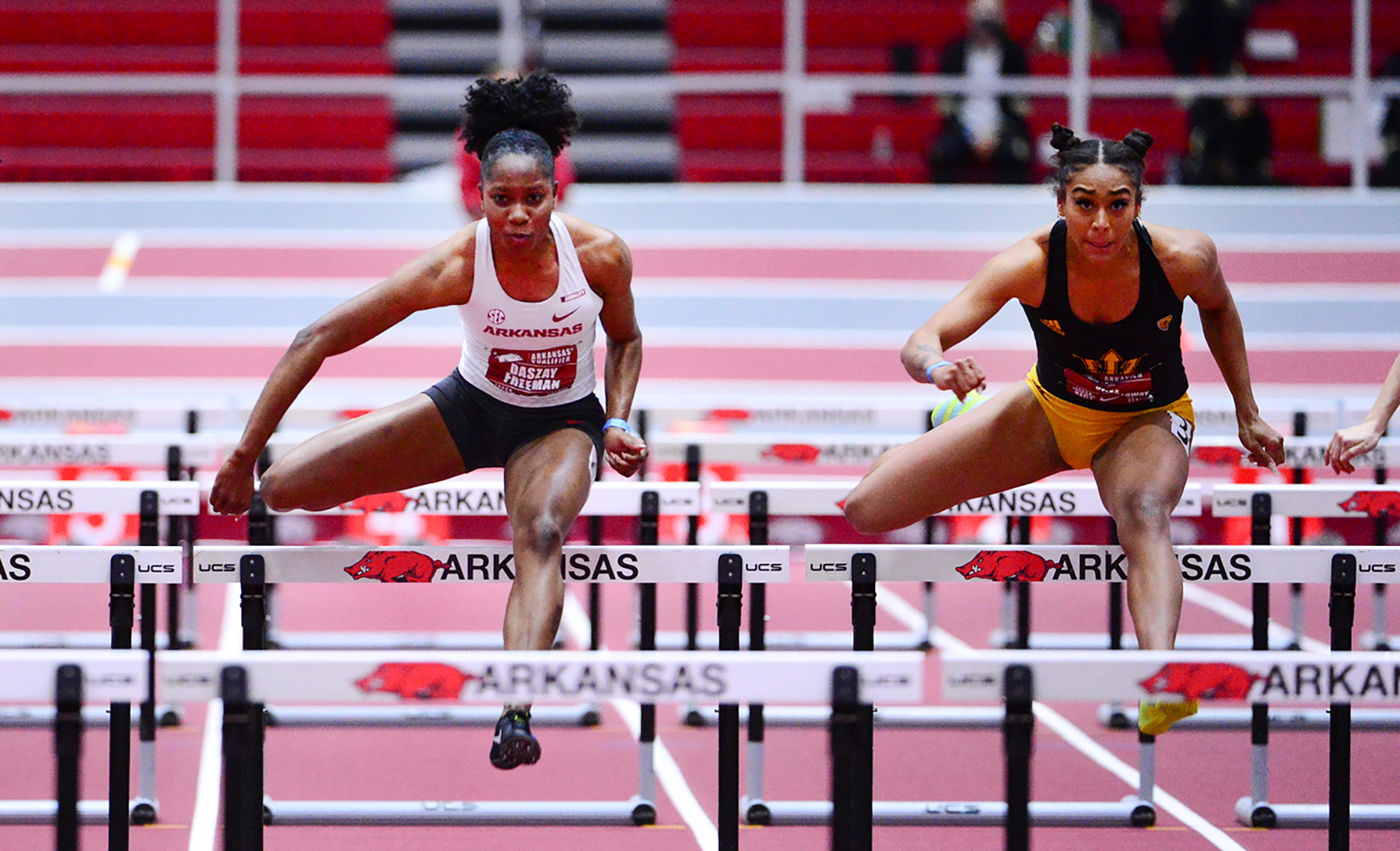 FAYETTEVILLE, Ark. – Seven victories highlighted a dominant performance by the No. 1 Razorbacks in Friday’s Arkansas Qualifier in the Randal Tyson Track Center.

With a tally of 167 points, the Razorbacks doubled the scoring output of Kansas State (84) to win a fourth consecutive meet this season after going undefeated during the cross country campaign. The rest of the field included Missouri (42), Arizona (33), Washington State (29), Kansas (27), UCLA (25), Vanderbilt (14), Arizona State (11), and Utah (2).

In the 60m hurdles a win by Daszay Freeman produced a time of 8.20 seconds, just off her career best of 8.15, while in third place Yoveinny Mota posted a 8.24 that equaled the Venezuelan national record set by Genesis Romero in 2020. Jaya Hollis placed sixth in 8.39.

“We had a great breakthrough in the hurdles as Daszay Freeman broke into the 20s with an 8.20 flat, which is a season best,” said Arkansas head coach Lance Harter. “Yoveinny Mota set her national record for Venezuela with an 8.24. So, the hurdles kind of got everything rolling.”

Kennedy’s effort was the top collegiate time in meet history, bettering a 4:41.62 by Oklahoma State’s Natalja Piliusina in 2011. The top mark of 4:38.85 was established by Therese Haiss with Nike in 2018.

“In the mile, Kennedy Thomson broke 4:40 for the first time and added a little more depth to our mile cadre,” noted Harter. “Gracie ended up with a 4:41, so we now have six runners at 4:41 or better in the mile. That’s incredible depth.”

“Our 400m runners went ballistic today with three of them under 53 seconds, led by Rosie Effiong, and then came back in the 200m and did the same thing with Tiana Wilson leading the group,” noted Harter.

Superlatives in the field events had Bailee McCorkle and Nastassja Campbell both clearing 14-2 ½ (4.33) to finish first and second in the pole vault. McCorkle improved her season best from a 14-1 ¼ effort while Campbell improved her best as a Razorback by half an inch, and remains in the No. 10 position on the Arkansas all-time list.

Following her heptathlon performance last week, G’Auna Edwards placed second in the long jump with a leap of 20-5 ¾ (6.24).