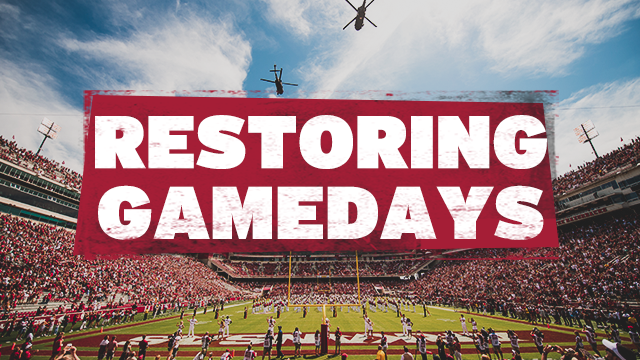 Restoring Gamedays: Razorback Football is Back!

The full pageantry of Razorback Football will be restored this season inside Donald W. Reynolds Stadium as we return to full capacity to support Head Coach Sam Pittman and the Hogs!

As excitement continues to build, the Razorbacks look forward to welcoming fans of all ages to Call the Hogs in person this year and participate in a variety of themed games throughout the fall.

RESTORING GAMEDAYS
To kick off the 2021 Football season the Hogs will take on former Southwest Conference foe, the Rice Owls. Kick-off for this game is set for 1:00 p.m.

We’re excited to renew all the things you and your family love about gamedays on The Hill, including the return of the Razorback Marching Band, Running Through the “A,” the return of Spirit Squads and Mascots to the field, Tailgating, Victory Village, HogTown on Maple Street, and more!

HogTown offers live entertainment, food and beverage options along with family-friendly activities beginning four hours prior to kickoff. The live concert series, which will take place on the Cumulus Media sound stage, will feature a variety of cover bands from the 80’s, 90’s and today!

RED AND WHITE STRIPE OUT
Be there and BE LOUD as we renew our rivalry against the Texas Longhorns and be sure to take part as we “Stripe Out Razorback Stadium” for this historic matchup. Kick-off is set for 6:00 p.m.

Click here for a map with a full breakdown of what color to wear in your section! Don’t worry, we will remind you a few times (and in a few ways) ahead of gameday.

Join us as we remember the 20th anniversary of 9.11.01 with special acknowledgements and festivities surrounding gameday.

SOUTHWEST CLASSIC
The Razorbacks head to Arlington, Texas to take on the Texas A&M Aggies in the 11th annual Southwest Classic at AT&T Stadium. This Southwest Conference Rivalry dates back to 1903 and will kick off its 77th iteration this season.

HOMECOMING
It’s Homecoming on the Hill as the Razorbacks host the Auburn Tigers in the SEC home opener. Join us as we celebrate the 91st annual “Homecoming on The Hill” with a variety of fun-filled events starting on Friday night with a pep rally featuring the the Best in Sight and Sound Razorback Marching Band and Razorback Spirit Squads along with the crowning of the Homecoming Queen and King.

SALUTE TO HEROES
In our annual game in War Memorial Stadium we will take on the UAPB Golden Lions in our Salute to Heroes game. Razorback Athletics will extend appreciation for active military, veterans, first-responders, law enforcement and healthcare workers.

Special ticket offers are available for these groups by contacting Patrick Kamerling at prkamerl@uark.edu.

MILITARY APPRECIATION
The Hogs return to Fayetteville and continue SEC play as they host SEC West rival, the Mississippi State Bulldogs. Join us as we proudly honor current and former members of the United States Armed Forces.

Special ticket offers are available for active or former military members and their families by contacting Patrick Kamerling at prkamerl@uark.edu.

SENIOR DAY & HOME FINALE
The Missouri Tigers come to town for the Battle Line Rivalry matchup set for 2:30 p.m. Be in your seat early as we honor and celebrate the 2021 Razorback Football Senior Class for their contributions to the University of Arkansas and Call the Hogs for the 2021 Home Finale.