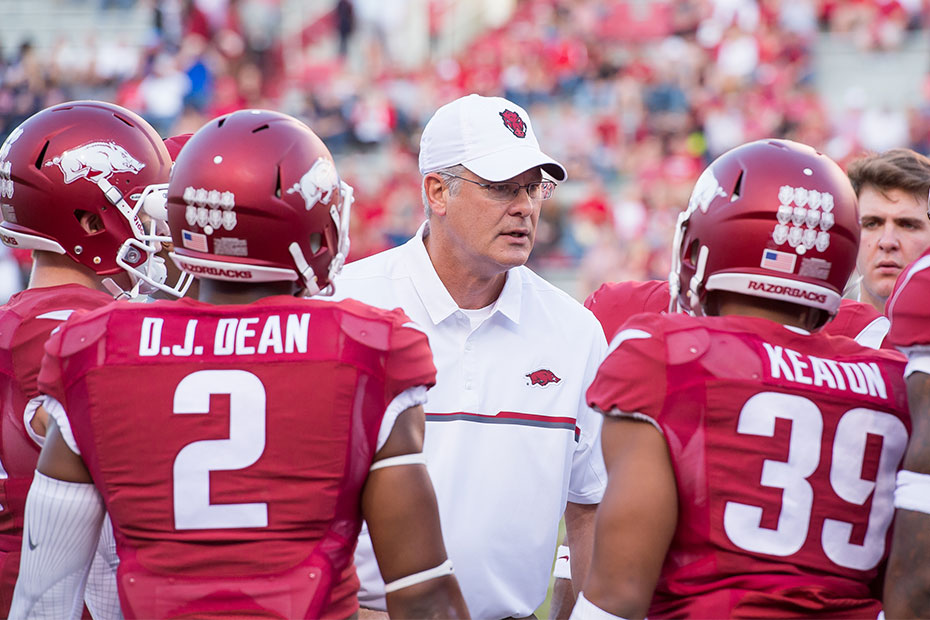 A native of Ankeny, Iowa, Rhoads served as defensive backs coach during his first season with the Razorbacks in 2016.

“With the hiring of Paul as our defensive coordinator, we are gaining a defensive coach who has coached at the highest level as both a head coach and a defensive coordinator in some of the most competitive conferences in the nation,” Bielema said. “When I first hired him as our defensive backs coach, I knew of his outstanding reputation and his experience. But in Paul’s time here at Arkansas, I’ve been able to see the way he’s developed our secondary and how our guys react to him. I have full confidence in him leading our defense. I was excited to share with our team Monday night that he will be the voice and coordinate our defense moving forward. Our players are very excited about the opportunity to get back to work for the upcoming season under his leadership. In the next few weeks, Paul and I will complete the defensive staff as part of our continued commitment to be much improved as a team heading into the future.”

Over his nine combined seasons as a defensive coordinator at Auburn (2008) and Pittsburgh (2000-07), Rhoads’ units ranked in the top 30 nationally in scoring defense six times and the top 12 for fewest yards three times.

“I’m honored and appreciative of this opportunity given to me by Coach Bielema,” said Rhoads. “We are looking forward to finishing up a great 2017 recruiting class followed by rolling up our sleeves and getting to work on our defense.”

Rhoads has been a part of 10 bowl games and has mentored six defensive backs that have been selected in the NFL Draft, highlighted by seven-time Pro Bowl selection and 2009 AFC Defensive Player of the Year Darrelle Revis. Revis was the 14th overall pick by the New York Jets in 2007 after playing for coach Rhoads when he was the defensive coordinator at Pittsburgh.

In 2016, Arkansas’ defensive backs unit forced 10 interceptions, returning four of those for touchdowns. The four interceptions returned for scores were the program’s most in one season since at least 1985, tying for fourth-most in the nation and second-most in the SEC. Three different Arkansas defensive backs recorded two interceptions apiece, including sophomore cornerback Ryan Pulley, who added 13 pass breakups to rank second in the SEC and tie for 12th nationally. In addition, senior cornerback Jared Collins tied for third in the SEC and 18th nationally with 12 pass breakups. Arkansas was one of just two schools in the conference with two players to rank in the top five of that category.

Prior to returning to Iowa State, he spent the 2008 season as the defensive coordinator at Auburn under former head coach Tommy Tuberville, where his defense ranked 18th nationally in scoring, allowing 18.0 points per game and 178.8 yards passing to rank 22nd nationally.

During Rhoads’ first stint at Iowa State (1995-1999), he served as the secondary coach his last four years after coaching the inside linebackers in 1995. He also assisted with the Cyclones’ special teams.