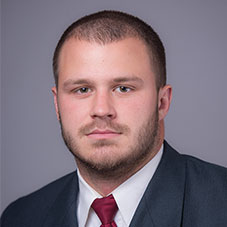 Senior (2014)
Started seven games and appeared in 11 before suffering an injury to close the season… Converted from quarterback to tight end in fall camp… Registered 303 yards receiving on 22 catches and three touchdowns, including a career-long 54-yard touchdown reception… Blocked for RBs Alex Collins and Jonathan Williams, who were the only FBS teammates to each rush for 1,000-plus yards in the 2014 season… at No. 6 Auburn (Aug. 30): Tallied 40 yards on four receptions, including a 17-yard touchdown catch… vs. No. 6 Texas A&M (Sept. 27): Hauled in second-career touchdown from 44 yards out and accrued 58 yards receiving… vs. No. 7 Alabama (Oct. 11): Earned CFPA Tight End of the Week Honorable Mention after capturing a career-long highlight-reel 54-yard receiving touchdown and tallied a career-high four receptions for 77 yards.

Sophomore (2012 at Coffeyville CC)
Helped lead Coffeyville to the Region IV semifinals, completing 149-of-321 passes for 1,936 yards and 22 touchdowns… Coached at Coffeyville by Aaron Flores.

Redshirt Freshman (2011 at Iowa)
Played in nine games and completed three passes for a total of 30 yards.

Freshman (2010 at Iowa)
Worked with the scout team while redshirting.

High School
Earned first-team all-state honors following junior and senior seasons…Led City to the state championship as a senior… Participated in the Army All-American Bowl and Hawai’i vs. Mainland All-Star Game following senior season… Completed 98-of-187 passes for 1,820 yards and 23 touchdowns while adding 752 yards on 142 rushes as a senior… Went 77-of-136 passing for 1,197 yards and 11 touchdowns and rushed 168 times for 1,064 yards and 13 touchdowns as a junior… Also played basketball and baseball, helping the basketball team win the state title as a sophomore… Coached at City by Dan Sabers.

Personal
Born Sept. 20, 1991, and is the son of Kelly and John Derby… Father lettered at Iowa from 1988-91 and played in the NFL for the Detroit Lions and Cleveland Browns… Brother Zach lettered at Iowa from 2010-11… Uncle Glenn Derby played at Wisconsin and was an offensive lineman for the New Orleans Saints in 1989-90… Graduated with a degree in economics.