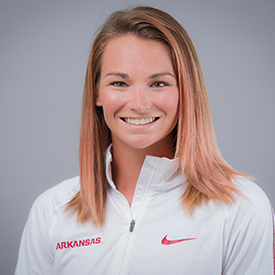 Junior (2015)
Indoor First Team All-American … Outdoor Second Team All-American … Won the Razorback Invitational pentathlon placing in the top three in all five events … Ran a career best of 8.41 in the 60-meter hurdles at the Arkansas Open to win the event along with the long jump (6.01m) … Qualified for the NCAA Indoor Championships … Scored a career best 4,430 points to take fourth in the pentathlon aided by a third place performance in the pent. high jump where she jumped 1.80m for a new PR in the event …  Carried her momentum into the outdoor season claiming the top spot at the Clyde Littlefield Texas Relays with a new career record of 6,027 in the heptathlon which ranks second in Arkansas history … Followed it up with a runner-up finish in the long jump at the Stanford Invitational … Finished first in the 100-meter hurdles and second in the high and long jump in her final tune-up before the SECs at the Arkansas Twilight … Finished in the top five in five out of seven hept. events at the SEC Championships to score six points towards the Razorbacks SEC Outdoor title … Qualified for the NCAA Outdoor Championships in the 100-meter hurdles and heptathlon … Scored 5,809 points for ninth place in the heptathlon at the national meet and also earned Honorable Mention honors for competing in the 100-meter hurdles.

Sophomore (2014)
Two-time Second Team All-American … Finished second in three out of five pentathon events at the Razorback Invitational to take second overall … Scored a season best 4,122 in the pentathlon at the SEC Indoor Championships to score four points for the Razorbacks … Qualified for the NCAA Indoor Championship … Threw a season best mark of 12.48 in the shot put to finish sixth in the pentathlon section … Opened the outdoor season with three top five performances in the hept. section of the 200-meter dash, 100-meter hurdles and shot put at the Clyde Littlefield Texas Relays to score a season best 5,522 points in the heptathlon … Came in third at SEC Championships with 5,476 points … Qualified for the NCAA Outdoor Championships … Finished eleventh at the national meet.

High School
As a prep athlete, Gochenour was the top-ranked multi-event recruit as a senior. While competing for Logan Magnolia HS, she was a 13-time Iowa Class 1A and Class 2A state champion. She won the 2010 USA Junior title in the heptathlon and went on to finish 10th at that year’s IAAF World Junior Championships.

Personal
Born on Feb. 17, 1993 … Daughter of Jeff and Karla Gochenour … Has a younger sister, Nicole … Majoring in crop science with a minor in agricultural business.