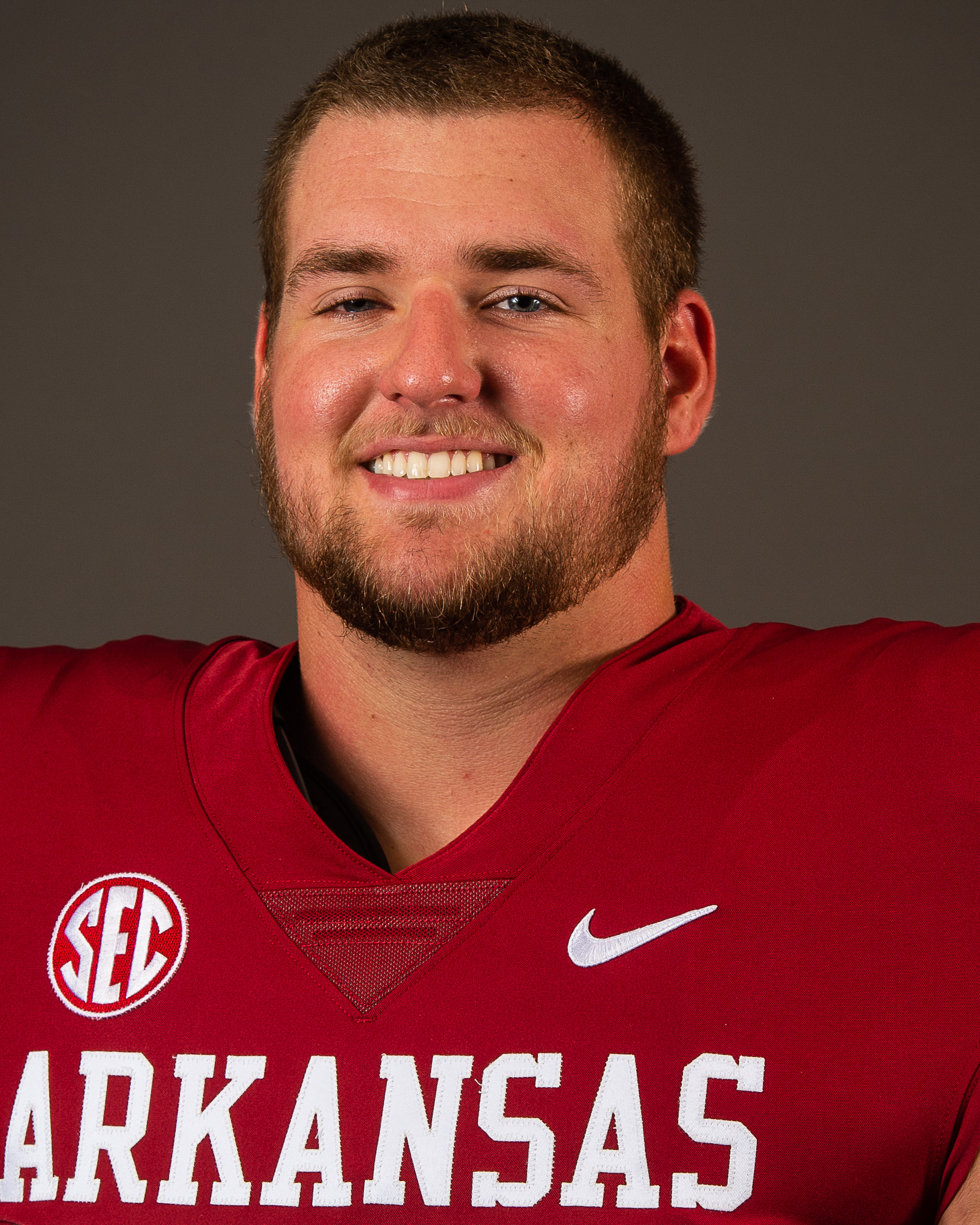 2021 (REDSHIRT SOPHOMORE): Played in all 13 games and started in last 11 games … Played an integral role in the Hogs’ efficient ground attack that led the SEC and all Power 5 schools in rushing … According to Pro Football Focus, logged 795 snaps at right guard throughout the season … Led the way for four Razorbacks to rush for at least 500 yards, something that had not happened at Arkansas since 1975 … Part of an offensive line that blocked for three games of 300+ yards of rushing (Texas, Ole Miss and Penn State) and two games of 600+ yards of total offense (Georgia Southern and Ole Miss) … Saw action in 15 snaps at right guard in season opener against Rice (Sept. 4) … Played 39 snaps at right guard in victory over Texas (Sept. 11) … Made first start of the season against Georgia Southern (Sept. 18) and played 67 snaps … Played a season-high 95 snaps at Ole Miss (Oct. 9).

2020 (REDSHIRT SOPHOMORE): Played in seven games and made five starts, all coming at right guard … Started the first three games of the year against Georgia (Sept. 26), Mississippi State (Oct. 3) and Auburn (Oct. 10) and against Texas A&M (Oct. 31) and Alabama (Dec. 12) … Penalized three times … According to Pro Football Focus, played 310 offensive – all at right guard – and 10 special teams snaps … Played every snap against Mississippi State … Did not allow a sack in 171 pass blocking plays … Recorded a season-high 85.1 pass blocking grade against Texas A&M.

2019 (REDSHIRT FRESHMAN): Played in four games as a freshman for the Razorbacks in 2019, seeing action against Colorado State (Sept. 14), Mississippi State (Nov. 2), Western Kentucky (Nov. 9) and Missouri (Nov. 29) … Totaled 30 snaps over the four games, according to Pro Football Focus, seeing a season-high 19 snaps against the Hilltoppers … Did not allow a sack or quarterback hit in 16 pass protection plays … Blocked for an offense that scored 28 times and racked up 4,081 total yards, including 2,315 passing yards, 1,766 rushing yards and 14 touchdowns both through the air and on the ground.

HIGH SCHOOL: Three-star prospect by Rivals, 247Sports and ESPN … Rated as the No. 67 offensive tackle in the nation by 247Sports … Two-year varsity letterwinner … Helped Tyler Lee High School to 2,346 yards on the ground, 1,159 yards through the air and 26 total offensive touchdowns during his senior season … Propelled Tyler Lee HS to a six-win campaign in 2017, as the offense put up almost 3,000 rushing yards and over 1,500 passing yards in his junior year …  CHOSE ARKANSAS OVER: Missouri, Oklahoma State, Baylor, Northwestern and others.