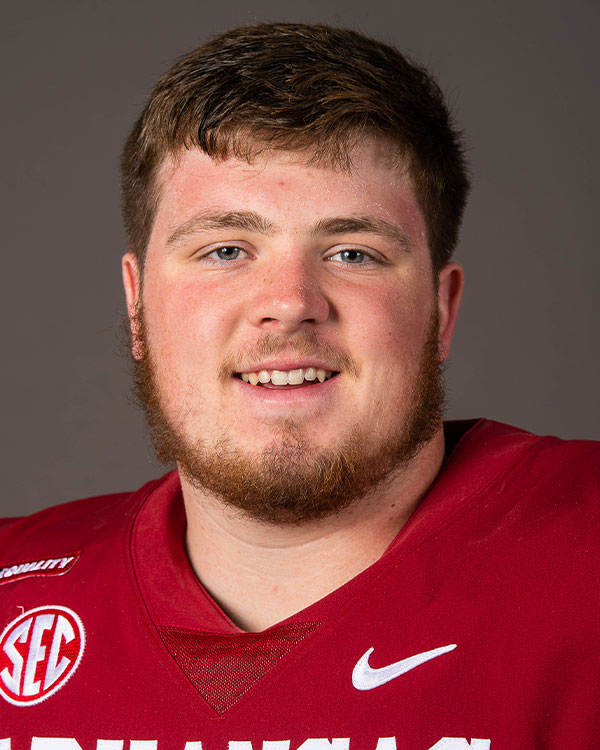 2021 (REDSHIRT SOPHOMORE): Started all 13 games, lining up primarily at left guard … According to Pro Football Focus, played in 890 snaps and held an 81.7 pass blocking grade throughout the season … Posted seven games with a pass blocking grade of 80.0 or higher … Led the way for four Razorbacks to rush for at least 500 yards, something that had not happened at Arkansas since 1975 … Part of an offensive line that blocked for three games of 300+ yards of rushing (Texas, Ole Miss and Penn State) and two games of 600+ yards of total offense (Georgia Southern and Ole Miss) … Charted a season-best 78.6 offensive grade against Georgia Southern (Sept. 18), including a season-high 76.6 run blocking grade … Played a season-high 95 offensive snaps against at Ole Miss (Oct. 9) … Recorded four consecutive games – against Mississippi State (Nov. 6), at LSU (Nov. 13), at Alabama (Nov. 20), against Mizzou (Nov. 26) – with a pass blocking grade above 80.0.

2020 (REDSHIRT FRESHMAN): Started all 10 games at left guard, one of two Razorback offensive lineman to start every game (Myron Cunningham) … Named to the SEC All-Freshman Team, the first Arkansas offensive lineman since Denver Kirkland in 2013 … Played every offensive snap of the game four times … Penalized three times … Earned first career start in the season opener against Georgia (Sept. 26) … According to Pro Football Focus, did not allow a sack on 351 pass blocking snaps … Saw action in 630 offensive snaps, the third most on the team, with 628 at left guard and two at right tackle … 72.3 pass blocking grade ranked nine among SEC guards that played over 350 pass blocking snaps … Posted a season-best 86.8 pass blocking grade against Ole Miss (Oct. 17).

2019 (FRESHMAN): Played in three games as a freshman for the Razorbacks in 2019, seeing time against Colorado State (Sept. 14), Alabama (Oct. 26) and Mississippi State (Nov. 2) … Totaled seven snaps on the offensive line, three in both SEC games, according to Pro Football Focus … Six of his seven plays were in run protection schemes … Blocked for an offense that scored 28 times and racked up 4,081 total yards, including 2,315 passing yards, 1,766 rushing yards and 14 touchdowns both through the air and on the ground.

HIGH SCHOOL: Three-star prospect by Rivals, 247Sports and ESPN … Rated as the No. 11 player in the state of Oklahoma by 247Sports … Lettered in both football and baseball at Jenks High School in Jenks, Oklahoma … 2018 Preseason All-World honoree for top offensive lineman by the Tulsa World … Helped Jenks to an 11-2 record and No. 2 team ranking in the state of Oklahoma as a senior … Anchored the offensive line to the OSSAA Class 6A-I Championship game on Nov. 30 … Father Bob Latham Jr. started at center for Oklahoma in 1988, lettering at OU from 1985-88 … CHOSE ARKANSAS OVER: New Mexico, Missouri State, Utah State and others.