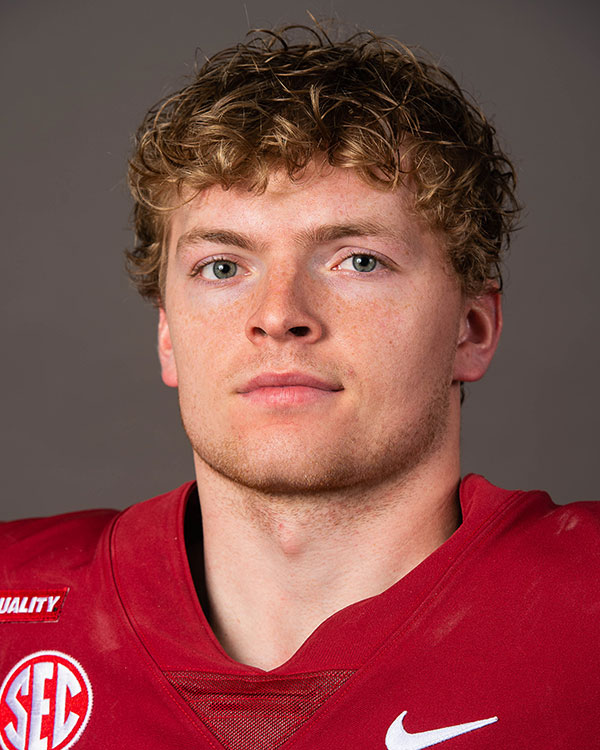 HIGH SCHOOL: Three-year varsity letter winner at Harrison High School for head coach Joel Wells as a linebacker and fullback … Named 2019 Farm Bureau Insurance Arkansas 5A Defensive Player of the Year… Selected to the 2019 Arkansas Sports Media High School Football Super Team, which is comprised of the best 27 seniors from across the state … Played in 37 games over three seasons for the Goblins … Comes from a winning culture at Harrison, which amassed a 32-6 record over his three seasons and qualified for the state playoffs each year … Named a captain and served as the signal caller defensively from his linebacker position while contributing offensively as a reliable blocking fullback … Finished high school career with 330 total tackles and 10.0 sacks … As a senior made 88 total tackles (47 solo, 41 asst.) with 4.5 tackles for loss, 2.5 sacks, one forced fumble and one fumble recovery in 12 games played … Offensively, carried the ball eight times for 67 yards (8.4 ypc) and scored one touchdown while making one reception out of the backfield and contributing 38 kickoff return yards … In junior campaign posted 124 total tackles (50 solo, 74 asst.) over 13 games while adding 6.5 tackles for loss, 4.5 sacks and one fumble recovery … As a fullback rushed 20 times for 142 yards (7.1 ypc), scored four touchdowns and hauled in two catches for 59 yards …  As a sophomore registered 124 total tackles (56 solo, 53 asst.) in 12 games while adding 4.0 tackles for loss and 3.0 sacks … Ran the ball four times for 57 yards (14.3 ypc) and scored a touchdown … In his high school debut as a sophomore, recorded 16 tackles against Mountain Home … The following week scampered for a career-best 50-yard touchdown run versus Siloam Springs … As a junior, part of a Goblins squad that captured the 5A-West Conference Championship, finished the regular season 10-0 and reached the semifinals of the state playoffs  … Recognized for his contributions in a win over Huntsville by garnering Brandon Burlsworth Foundation Player of Game honors … During senior season named Brandon Burlsworth Foundation Player of the Game for his contributions against Siloam Springs … Also a member of the Harrison track and field team competing in discus and shotput.