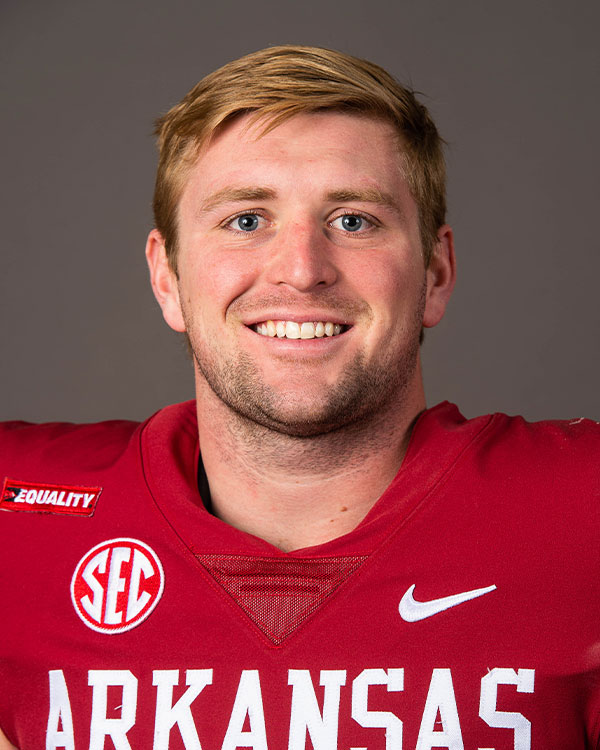 2021 (SENIOR): Played in all 13 games with one start at linebacker earning Second-Team All-SEC honors from the Associated Press and league’s coaches … Led the Hogs in total tackles with 125 (45 solo), his second consecutive season with 100+ total tackles and enters the 2022 season with 349 career tackles – ninth all-time at Arkansas … Racked up 7.5 tackles for loss, tied for second most on the squad … Finished 10th in the nation in total tackles (125) and tallied 9.6 tackles per game, ranking second in the SEC and 15th nationally … Has totaled the second-most tackles (320) among all FBS defenders since 2019, second to only Troy LB Carlton Martial (367) … Posted a team-leading seven games with double-digit stops, third most nationally … Also led the Hogs in tackles in seven games … Totaled a season-high 14 stops in the season opener against Rice (Sept. 4), earning his first and only start of the year against the Owls … Made 10 tackles against Texas (Sept. 11), his second double-digit tackle performance in as many games … Racked up consecutive double-digit tackle efforts at Georgia (Oct. 2) and at Ole Miss (Oct. 9) with 11 and 12, respectively … Also collected 1.5 tackles for loss at Ole Miss … Turned in a 10-tackle performance against Mississippi State (Nov. 6), his fifth double-digit tackle effort of the season … Carded a season-high 2.0 tackles for loss at LSU (Nov. 13), posting 13 total tackles in the win … Nabbed his seventh double-digit tackle effort of the season against Missouri, logging 13 stops against the Tigers … Made five stops in Outback Bowl victory over Penn State (Jan. 1).

2020 (JUNIOR): Named to the All-SEC Second Team by the coaches … Lott IMPACT Trophy Semifinalist … Played and started in nine games at linebacker, missing the Ole Miss (Oct. 17) game due to a shoulder injury … Finished second on the team making 101 total tackles (40 solo) and tied for second with 6.5 tackles for loss and five passes broken up … Ranked second in the SEC and ninth in FBS averaging 11.2 tackles per game … Also recorded 0.5 sacks and one quarterback hurry … Team’s leading tackler in a team-best six games … Posted 11 tackles with half-a-sack, 1.0 tackle for loss and a pass broken up in the season opener against Georgia (Sept. 26) …Named SEC co-Defensive Player of the Week, alongside teammate Joe Foucha, and earned Bronko Nagurski National Defensive Player of the Week for his career-high 20 tackles and two passes broken up performance in the win at Mississippi State (Oct. 3) … His 20 tackles were most by a Razorback since Jerry Franklin’s 20 in 2010 against Mississippi State … The performance is tied for 10th-most in a game in school history and second-most in FBS this season … Broke up a pass for the third straight week and made five tackles at Auburn (Oct. 10) … Made a game-high 14 tackles with a career-high 3.0 tackles for loss at Texas A&M (Oct. 31) … Led the team in tackles for the second straight week, making 14 stops with 1.5 tackles for loss and a quarterback hurry in the win over Tennessee (Nov. 7) … Collected seven tackles at Florida (Nov. 14) … Registered 11 tackles with a pass broken up against LSU (Nov. 21) … Recorded six tackles with 1.0 tackle for loss at Missouri (Dec. 5) … Led the team in tackles, making a game-high 13 tackles against Alabama (Dec. 12) in the season finale … Registered six double-digit tackle games … According to Pro Football Focus, played 663 defensive and 67 special teams snaps … Recorded a single-game best defensive grade of 69.0 against Texas A&M.

2019 (SOPHOMORE): Started all 12 games for the Razorbacks in 2019 at the WILL linebacker spot … Appeared in 698 plays as a sophomore (Pro Football Focus), with 623 lined up on defense, also seeing time on Arkansas’ various special teams units … Finished second on the team in total tackles with 94, a career-high … Tallied 38 solo stops, 6.5 for loss with half-a-sack, breaking up five passes and getting credit for a quarterback hurry … Opened the season with a team-high six tackles against Portland State (Aug. 30) … Registered his first TFL at Ole Miss (Sept. 7) as part of a nine-tackle showing against the Rebels, leading the team again for the second-straight week … Sandwiched seven stops vs. San Jose State between a pair of four-tackle games against Colorado State (Sept. 14) and Texas A&M (Sept. 28), with a half-tackle-for-loss vs. the Aggies in Arlington … Set a career-high in TFLs with 1.5 and matched a personal-best in total stops with 10 at Kentucky on Oct. 12, his first game in 2019 with double-digit tackles … Notched his only sack of the season against Auburn on Oct. 19, finishing with nine stops in the game … Followed a five-tackle showing at Alabama with a career-high 13 tackles vs. Mississippi State on Nov. 2, which included another 1.5 TFLs … Third game to lead the team in tackles in 2019 … Had nine tackles and half-a-tackle-for-loss vs. WKU (Nov. 9), followed by a five-tackle game at LSU … Wrapped up the year with another 13-tackle performance against Missouri in Little Rock, tallying a TFL in the contest … Posted three tackling grades over 81.0 from PFF, with a season-best 83.5 against the Hilltoppers … Finished the year with a 77.9 overall quarterback pressure grade from the outlet.

2018 (FRESHMAN): Played in 10 games in his first season with the Razorbacks, starting four at the weak inside linebacker position … Totaled 340 snaps played in 2018, according to Pro Football Focus, with 275 coming on defense and 65 on Arkansas’ special teams units … Recorded 29 total tackles, 14 solo, with 2.5 tackles for loss (four yards) … Broke up four passes, created with a quarterback hurry, blocked a kick and recovered a fumble … His blocked field goal came in the season opener against Eastern Illinois in the second quarter … Also recovered and returned a fumble in the contest against the Panthers 60 yards in the third quarter, setting up a Connor Limpert chip-shot field goal … Finished the season opener with six tackles, then followed it up with four at Colorado State and three against North Texas before SEC play … Didn’t record another stop until facing Vanderbilt, posting 10 for his first double-digit tackle performance of his career … Ended the year with six stops at Missouri … Earned a 91.3 special teams grade from PFF for his efforts against EIU … Put together a season-best 81.0 overall defensive grade on homecoming vs. Tulsa … Part of a defensive crew that racked up 882 total tackles over the course of the 2018 campaign.

HIGH SCHOOL: Four-star recruit by 247Sports and Rivals … No. 236 ranked overall prospect by 247Sports … No. 12 inside linebacker in Texas by 247Sports and No. 14 according to Rivals … Top-40 player in Texas by 247Sports (No. 27) and Rivals (No. 37) … Recorded more than 300 tackles in his four-year career at Lovejoy … As a senior, totaled 166 tackles (108 solo), recorded 14 tackles for loss, broke up four passes, forced three fumbles, had three interceptions and blocked one PAT … Also was used in a wildcat role on offense and found the end zone six times … Tallied 12 tackles, blocked a PAT, broke up a pass and returned an interception 42 yards for a touchdown in a 63-15 win over Forney … Registered 30 tackles over the first three games of the season … Ran for 51 yards and two touchdowns on nine carries in a 45-29 win over Sulphur Springs … Accepted an invitation to participate in The 88 Offense-Defense All-American Bowl featuring 88 of the top high school recruits in the 2018 class … Among 51 players on the Butkus Award’s high school watch list … Named the linebacker MVP out of 31 other prospects at his position at the Nike Football The Opening Regional Dallas … As a junior in 2016, had 110 tackles, 6 tackles for loss, 2 pass deflections, 1 pass breakups, 1 interception, 1 forced fumble and 1 recovered fumble … Earned a spot on the 15-5A Football All-District second team … As a sophomore in 2015, collected 148 tackles, 18 tackles for loss, four sacks, a quarterback hurry, six pass breakups, five forced fumbles and two recovered fumbles … Coached by Todd Ford … A four-sport athlete who also wrestles, plays golf and competes in track … Chose Arkansas over Alabama, LSU, Texas A&M, USC, Michigan, Oklahoma State, TCU, Arizona, Maryland and SMU.

PERSONAL: Yes, his legal name is Bumper Pool. He legally changed it from James Pool to Bumper when he turned 16 … His sister, Maddie, is Arkansas’ Director of On-Campus Recruiting Operations and an Arkansas graduate.