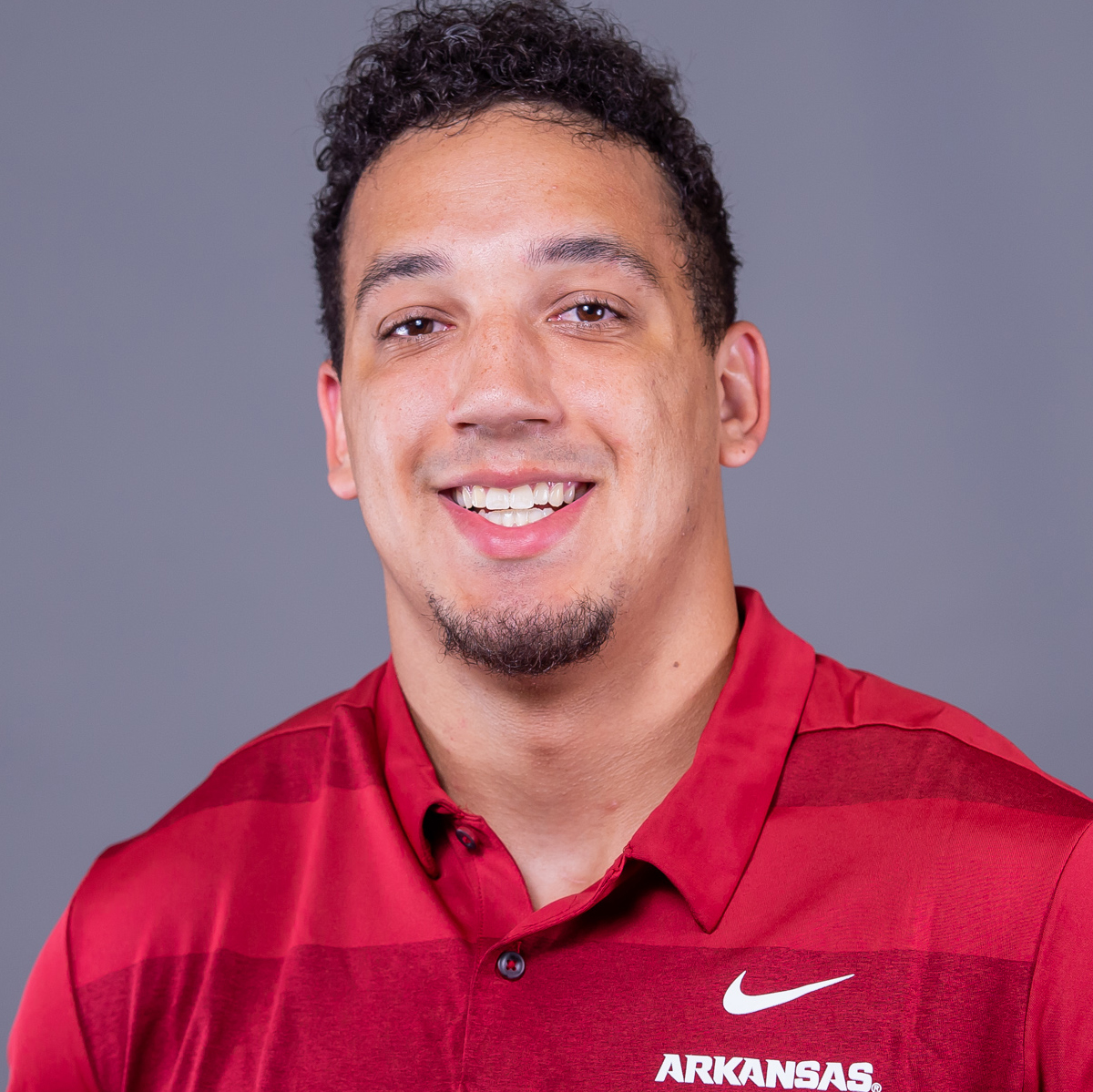 2018 (JUNIOR): Played in 10 of 12 games for the Razorbacks during his junior season, starting five at the tight end position … Earned two Pro Football Focus SEC Team of the Week honors in back-to-back games after performances against Texas A&M (Sept. 29) and Alabama (Oct. 6) … Totaled 352 snaps over the course of the 2018 campaign, according to PFF … Led the team in receptions (30) and receiving touchdowns (6), racking up 400 yards for an average of 13.3 per catch … All of his receptions came in the final eight games of the year, after missing the first two games and not hauling in a pass in his first two contests played vs. North Texas and at Auburn … Recorded his first catch of the season against the Aggies as part of a three-catch, 77-yard performance, leading the team in receiving yards for the first of four times in 2018 … Followed it up with season-high seven receptions, going for 48 yards, finding the end zone twice against the Crimson Tide … Scored on an eight-yard pass from Ty Storey in the first quarter, then again in the second on a three-yard catch to become the second Razorback receiver at that point in the year to score two touchdowns in a game … Crossed the goal line in Little Rock against Ole Miss the next week on a 39-yard catch from Storey to take a 10-3 lead in the opening frame … Finished with three catches and 41 yards against the Rebels … After a two-reception, 35-yard game vs. Tulsa, he rattled off a season-high 83 yards on six catches, scoring on a 12-yard pass at the end of the game … Tallied six more receptions vs. LSU, with two touchdowns, both in the fourth quarter on plays of 11 & 32 yard to pull the game within one score … Rounded out the game with 75 yards, his last game of the year to lead the team in receiving yardage … His performance vs. the Tigers made him the only Razorback score multiple touchdowns in two games in 2018 … Finished the year with an 85.9 receiving grade from PFF, landing above 80.0 in four different games, including two above 90.0 (Alabama & Vanderbilt) … Topped out in the category at 92.0 vs. the Commodores, wrapping up the game with a 92.6 offensive mark, also a season-best … Helped the Razorbacks be one of four SEC teams to complete passes to four different tight ends in 2018 … Part of a receiving corps that put up 2,307 yards through the air and 17 touchdowns.

2016 (REDSHIRT FRESHMAN): Scored his first career touchdown on a 28-yard reception in the Belk Bowl (Dec. 29) against Virginia Tech … Played in eight games with three receptions for 60 yards … Two of his three catches went for 20-plus yards and two resulted in a first down … at Mississippi State (Nov. 19): First career catch was a 23-yard grab in the second quarter … vs. Virginia Tech (Dec. 29): Finished third on the team with 40 receiving yards on two catches.

HIGH SCHOOL: Earned four stars by Rivals, ESPN and 247Sports and earned four stars by 247Composite, a combined index of national recruiting rankings … Named the top recruit in the Natural State and the No. 2 tight end in the nation by both Rivals and 247Sports … Rivals ranked him as the No. 90 overall prospect in the Rivals100 … Ranked as the 130th-best player in the Top247 by 247Sports … ESPN listed him as the third-best tight end in the nation and the 193rd-best player in the ESPN 300 … The No. 2 player in the HawgSports.com Natural 21 rank of prospects from Arkansas … Was invited to play in the Semper Fidelis All-American Bowl … Named to the 2014 Associated Press Super Team for the state of Arkansas … Earned All-ArkansasVarsity.com First Team honors at tight end … Earned all-state honors at tight end in Arkansas Class 7A West … Helped lead Fayetteville High School to a 13-3 record and the Arkansas class 7A state championship game in 2014 … Caught 41 passes for 766 yards (18.7 avg.) and 11 touchdowns as a senior … Tallied 45 receptions for 884 yards (19.6 avg.) and 14 touchdowns as a junior … High school teammate of fellow Razorback Dre Greenlaw … Coached by Daryl Patton … Chose Arkansas over offers from Texas, Oklahoma, Ole Miss, Mississippi State and several others.

PERSONAL: Born on Sept. 20, 1996 … Son of Jessika O’Grady and the late Larry Marks, who was a three-year letterman in men’s basketball at Arkansas from 1988-90 … Recreation and sport management major.