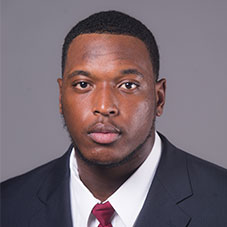 Senior (2014)
Participated in nine contests and made one start… Saw action in more than 100 snaps… Blocked for RBs Alex Collins and Jonathan Williams, who were the only FBS teammates to each rush for 1,000-plus yards in the 2014 season… Helped protect QB Brandon Allen as the offensive line led the SEC with 14 sacks allowed…vs. Nicholls (Sept. 6): Graded-out at a season-high 91 percent with one knockdown… vs. No. 6 Texas A&M (Sept. 27): Tallied two knockdowns and graded-out at 80 percent.

Junior (2013 at UNLV)
Started his final 33 games in Las Vegas at left guard but also has experience at left tackle and right tackle… Was a team captain and honorable mention All-Mountain West selection as he helped lead UNLV to the Heart of Dallas Bowl, the program’s first bowl appearance since 2000… The Rebels averaged 411 rushing yards per game, the sixth-highest single-season average in school history, and produced 11 100-yard rushing games.

Sophomore (2012 at UNLV)
Started all 13 games of his sophomore season and showed his versatility with starts at left guard, left tackle and right tackle.

Freshman (2011 at UNLV)
Played all 12 games and started the final seven at left guard.

High School
Began his football career as a junior in high school and earned first-team All-Southwest League honors as a senior, helping the Diamondbacks to a 7-3 record and a berth in the state playoffs… Coached at Desert Oasis by Faron Seibel.

Personal
Born May 2, 1992, he is the son of Michele and William Jefferson… His father was a standout offensive lineman at Maryland and played in the NFL for the Browns, Raiders and Colts.