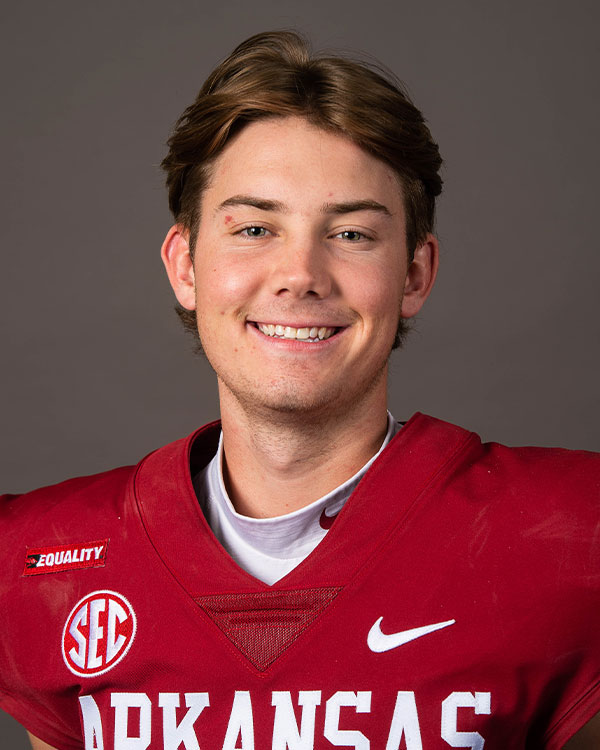 2021 (FRESHMAN): Enjoyed a stellar freshman campaign, earning Freshman All-America honors from the FWAA, Pro Football Focus and The Athletic while also being named to the SEC All-Freshman Team … Filed Lou Groza Award Star of the Week after making four field goals against Mississippi State … Collected two SEC Freshman of the Week honors, one for his performance against Texas and the other for his outing against Mississippi State … Earned SEC Special Teams Player of the Week for his game-winning field goal in overtime at LSU … Logged five games with multiple field goals … Appeared in all 13 games connecting on 20 of his 24 field goal attempts, the third-most makes in a single season by a Razorback kicker … Drilled all 46 of his point after attempts to match the seventh-most in a single-season in program history and most since 2015 …. Charted the fifth-best single season field goal percentage (83.3 percent) in school history and the best by an Arkansas kicker since 2013 … Hit his first career collegiate field goal in the season opener against Rice (Sept. 4) … Earned SEC Freshman of the Week after nailing a career-best four field goals (4-for-4) against Texas (Sept. 11) … Totaled nine points after hitting a 25-yard field goal and going 4-for-4 on PATs against Georgia Southern (Sept. 18) … Made both field goals, including a 46-yarder, while adding two made PATs against Texas A&M (Sept. 25) … Converted on all six PATs and connected on a 31-yard field goal against Ole Miss (Oct. 9) … Contributed five points against Auburn (Oct. 16) thanks to a pair of PATs and a 44-yard field goal … Secured second SEC Freshman of the Week honor after being responsible for 11 of the Hogs’ 31 points against Mississippi State (Nov. 6), hitting field goals from 46, 48 and a career-long 51 yards away … Named SEC Special Teams Player of the Week after kicking a 37-yard game-winning field goal in overtime at LSU (Nov. 13) and finishing the game with 10 points thanks to three made field goals from 48, 27 and 37 yards and a made PAT … Made all five PATs vs. Alabama (Nov. 20) … Registered 10 points against Missouri (Nov. 26) after notching two made field goals and all four PATs … Called on for one field goal from 36 yards to go with three made PATs against Penn State (Jan. 1) in Outback Bowl win.

HIGH SCHOOL: According to Kohl’s Kicking, rated a five-star punter and kicker and is the No. 2 kicker and No. 5 punter in his class … Consensus three-star prospect by 247Sports, Rivals and ESPN … Ranked as the No. 1 kicker in his class by 247Sports … Handled place kicking, kickoff and punting duties for head coach Josh Norman at Southmoore High School … As a senior was named Central Oklahoma Athletic Conference Special Teams Player of the Year … Selected an Adidas All-American and named to the Under Armour All-American Game roster … USA Today Preseason Second Team All-American … As a junior was named to the Tulsa World All-State Second Team and Oklahoman Big All-City Second Team … Was also named Central Oklahoma Athletic Conference Special Teams Player of the Year and Oklahoman All-State Honorable Mention … As a senior, made 6-of-10 field goals with a long of 49 yards and made 24-of-24 point after tries … Punted 41 times, placing nine inside the 20-yard line … CHOSE ARKANSAS OVER: Colorado, Oklahoma State, Nevada, Air Force, Navy, Army and others.