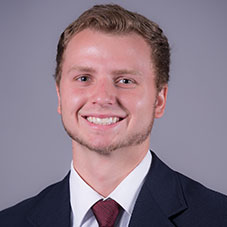 Freshman (2014)
Redshirted as a true freshman.

High School
A vital part of Argyle High School’s 2013 Texas 3A D2 state championship team … Named a Parade All-American and All-USA first team by USA Today … Won the Chris Sailer Award presented to the National Placekicker of the Year … A three-star prospect according to ESPN, Rivals, 247Sports and Scout … Ranked as the No. 3 kicker in the country by 247Sports … Argyle ran through a perfect 16-0 season and the 3A D2 state title in 2013 … Holds the national record with 25 made field goals in a season from his sophomore year and with 56 career made field goals … Made 157 straight PATs, including a perfect 101-for-101 in 2013 … As a senior, he was 24 of 30 on field goals with a long of 57 yards and led the country in kick scoring with 168 points … His junior year, he made 7 of 10 field goal attempts for Argyle’s 11-2 team that advanced to the third round of the state playoffs … As a sophomore, he was 25 for 30 on field goal attempts, breaking the national record for single-season made field goals, and the Eagles ended their 14-2 season with an appearance in the state championship game … Also played soccer … Coached by Todd Rogers … Chose the Razorbacks over Texas A&M.