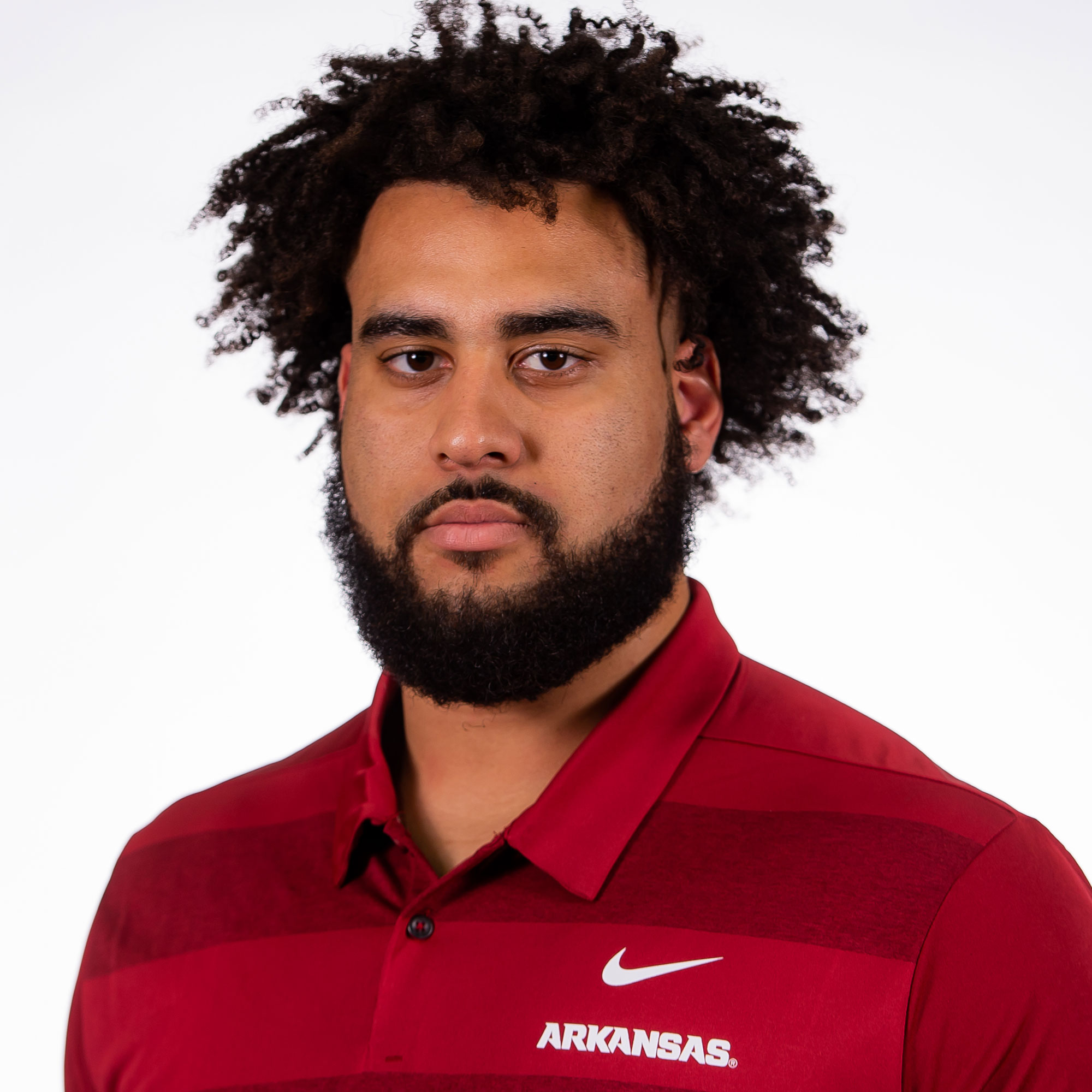 2019 (SENIOR): Started five games for the Razorbacks in 2019 at left tackle, medically retiring midway through the season due to sustained injuries throughout his career … Totaled 321 snaps on the offensive line, according to Pro Football Focus, participating in every play in three games against Portland State (Aug.30), Ole Miss (Sept. 7) and Texas A&M (Sept. 28) … Worked 191 pass protection plays, allowing three sacks … Put together his best pass blocking grade from PFF in the season opener against the Vikings at 79.6 … Blocked for an offense that scored 28 times and racked up 4,081 total yards, including 2,315 passing yards, 1,766 rushing yards and 14 touchdowns both through the air and on the ground.

2018 (JUNIOR):Played in 10 games for the Razorbacks in 2018, starting eight of the last nine at the left tackle position … Totaled 516 snaps during his junior campaign on the offensive line, according to Pro Football Focus … Allowed just one sack over the course of 305 pass blocking plays … Put together four games of pass protection grades over 75.0 from PFF, all coming in consecutive conference games against Texas A&M (77.0), Alabama (85.6), Ole Miss (79.9) and Vanderbilt (75.8) … His grade vs. the Crimson Tide propelled him to a season-best overall mark of 71.0 in the contest … Helped the Arkansas offense to 4,028 yards of total offense and 28 touchdowns, with 2,307 yards and 17 scores coming through the air.

2017 (SOPHOMORE): Started 10 of 12 games played at left tackle … Played the third-most offensive snaps on the team (702) … 349 snaps were in pass protection … Allowed only one sack … at Ole Miss (Oct. 28): Earned his best SEC game grade from Pro Football Focus (81.2) and a season-high pass-blocking grade (88.2) … Played all 85 offensive snaps and allowed zero pressures … Helped pave the way for the offense to rush for a season-high 260 yards … vs. Coastal Carolina (Nov. 4): Credited with a season-high game grade from PFF (83.0) … Also earned a season-best grade in the run game (85.7) … Cleared paths for the offense to rush for 259 yards, four touchdowns and a season-high 7.4 yards per carry.

2016 (REDSHIRT FRESHMAN): Started three of 12 games played at right tackle and played 200-plus snaps … His three starts came in the first three games of the season … at No. 15 TCU (Sept. 10): Opened lanes for Rawleigh Williams III to run for 137 yards and blocked as Austin Allen threw for 233 yards … vs. Texas State (Sept. 17): Helped the offense rush for 226 yards and three scores on the ground.

HIGH SCHOOL: A four-star prospect who was ranked as the fifth-best player in Arkansas by 247Sports … Earned a three-star rating from Rivals, ESPN and Scout … Rivals ranked him as the No. 7 player in Arkansas and the No. 55 offensive tackle in the nation … Ranked the top offensive tackle in Arkansas and the No. 50 tackle nationally by Scout … 247Composite ranked him as the seventh-best player in Arkansas, a combined index of national recruiting rankings … Was the No. 7 player in Arkansas according to HawgSports.com’s Natural 21 … Named to the Associated Press Arkansas Super Team in 2014 … Earned all-state honors at offensive line … Recognized as one of four offensive linemen on the All-ArkansasVarsity.com first team … Helped Conway win 11 games in 2014, including a perfect 8-0 mark in conference play and the conference championship … Coached by Clint Ashcraft … Also participated in basketball and track and field.