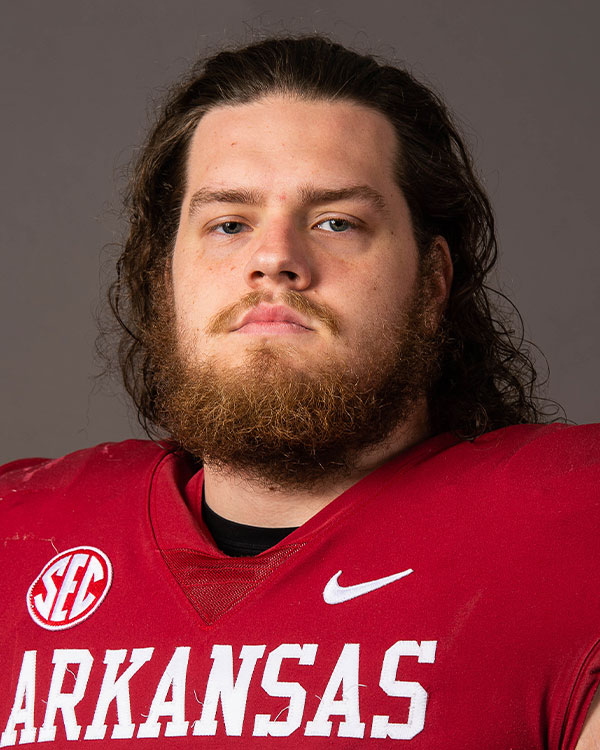 2021 (REDSHIRT JUNIOR): Appeared and started in 10 games at right tackle … Started first five games before missing next three due to injury … According to Pro Football Focus, played in 560 snaps at right tackle as well as one snap at right guard … Led the way for four Razorbacks to rush for at least 500 yards, something that had not happened at Arkansas since 1975 … Part of an offensive line that blocked for three games of 300+ yards of rushing (Texas, Ole Miss and Penn State) and two games of 600+ yards of total offense (Georgia Southern and Ole Miss) … Posted a career-best 73.7 offensive grade for the 2021 season … Earned a season-high 87.1 run blocking grade in against Mizzou (Nov. 26) … Logged a career-best 83.8 pass blocking grade against Penn State (Jan.1) in Outback Bowl victory.

2020 (REDSHIRT JUNIOR): Played in eight games and started the final five at right tackle … Made first start of the year in the win over Tennessee (Nov. 7) … Penalized three times … Played every snap of a game three times … According to Pro Football Focus, played in 413 snaps all at right tackle, also played 13 special teams snaps according to Pro Football Focus … Logged a 69.2 pass blocking grade … Turned in a season-high 77.5 pass blocking grade in the season opener against Georgia (Sept. 26).

2019 (REDSHIRT SOPHOMORE): Started all 12 games for the Razorbacks at right tackle in 2019 … Totaled 798 plays, including 751 on the offensive line, the second-most of all Arkansas offensive players … Played every snap in each of the first two games (Portland State, Ole Miss) and three of the first five (Texas A&M), as well as at Kentucky and in the season finale against Missouri in Little Rock … Put together two pass blocking grades from PFF over 81.0, with an 82.6 against Portland State (Aug. 30) and at LSU (Nov. 23) … Finished with his highest overall offensive grade at 72.8 vs. Western Kentucky (Nov. 9) … Blocked for an offense that scored 28 times and racked up 4,081 total yards, including 2,315 passing yards, 1,766 rushing yards and 14 touchdowns both through the air and on the ground.

2018 (REDSHIRT FRESHMAN): Played in 11 of 12 games for the Razorbacks in 2018, starting once on homecoming against Tulsa at the left tackle position … Totaled 205 snaps during his freshman season according to Pro Football Focus, with 160 coming on offensive plays and 45 on field goal/extra point opportunities … Appeared in a season-high 73 snaps vs. the Golden Hurricane … Had only participated in seven plays at LT before that week eight contest, seeing the rest of his time at right tackle leading up to and after the game … Did not allow a sack or a QB hit in 65 pass protection snaps … Put together three grades from PFF of 72.0 or higher in pass blocking, topping out at 81.1 at Colorado State on Sept. 8 … Helped the Arkansas offense to 4,028 yards of total offense and 28 touchdowns, with 2,307 yards and 17 scores coming through the air.

HIGH SCHOOL: Enrolled in January 2017 and participated in spring practice … Consensus three-star prospect according to ESPN, Rivals, Scout and 247Sports … Rated the No. 256 overall prospect in the class by 247Sports … Tabbed a top 50 prospect at his position by 247Sports (No. 32) and Scout (No. 46) … Touted as the No. 1 offensive tackle in the state of Illinois according to Scout … Ranked as the No. 4 player in the state by 247Sports, No. 8 by Scout and No. 19 by ESPN … A three-year starter on the offensive line at Richmond-Burton … Coached by Pat Elder … Earned a spot on the Northwest Herald All-Area first team in 2016 for the second straight season … Named to the Illinois High School Football Coaches Association Class 4-A All-State team and All-Kishwaukee River Conference team … Helped Richmond-Burton to a 6-4 record with a 5-1 mark in conference play and the program’s 10th consecutive Class 4A playoff appearance in 2016 … Paved the way for the Rockets to score 30 or more points four times … Add 14 total tackles, one tackle for loss and a half-sack on defense in 2016 … Helped Richmond-Burton advance to the second round of the state playoffs in 2015 … Was one of 600 players selected to the 2016 U.S. Army All-American Combine in San Antonio … Chose Arkansas over Louisville, Utah, California, Vanderbilt, Virginia, Illinois, Indiana, Purdue and others.