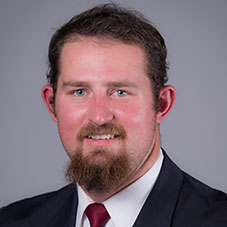 Career (2013-16)
Four-year starter … Played in 51 games with 47 straight starts (second-longest streak in program history) to close his career … 26 starts came at left tackle, 13 at right tackle and eight at left guard … One of just six offensive linemen in program history to earn All-SEC honors twice in a career … Blocked seven field goal attempts, just two off the FBS record … All three of his career offensive lineman of the week awards came over his last 16 weeks of SEC regular season action … Also added an SEC Special Teams Player of the Week accolade to his collection in 2016 … Helped Arkansas’ offenses eclipse 5,000 total yards during his freshman, junior and senior campaigns … Opened rushing lanes for Alex Collins (2013-15), Jonathan Williams (2014) and Rawleigh Williams (2016) to combine for five 1,000-yard seasons on the ground.

Started all 13 games at left tackles … Served as a team captain … One of three players to be named SEC Lineman of the Week twice … Paved the way for Rawleigh Williams III to capture the SEC regular season rushing title with 1,326 yards on the ground, while Austin Allen threw for an SEC-best 3,430 yards … Cleared paths and provided time as Austin Allen and Rawleigh Williams were one of only two QB/RB duos in the Power 5 conferences to average at least 260 yards passing and 100 yards rushing per game … Helped lead an offensive line that blocked for 428.4 yards of total offense per game … Opened holes for Rawleigh Williams and Devwah Whaley to total nine 100-yard rushing performances … Helped the offense log both 200 yards passing and rushing in the same game five times … at No. 15 TCU (Sept. 10): Blocked his sixth career kick with under 10 seconds left in the fourth quarter as the Horned Frogs attempted the game-winning field goal … Graded out at a team-best 90 percent to help pave the way for Rawleigh Williams to run for 137 yards and Austin Allen to throw for 233 yards … vs. Alcorn State (Oct. 1): Opened lanes for two 100-yard rushers as Devwah Whaley went for 135 yards and a touchdown, while Rawleigh Williams added 126 yards … Blocked for 559 yards of total offense, including 353 yards on the ground, and no sacks allowed … vs. No. 12 Ole Miss (Oct. 15): Helped the offense rush for 200 yards and pass for 229 in the win … 180 yards on the ground came from Rawleigh Williams … vs. No. 11 Florida (Nov. 5): Cleared paths for 223 yards rushing, including 148 and two touchdowns by Rawleigh Williams, against the Gators’ top-10 run defense … Provided time for 243 yards passing and 466 yards of total offense … at Mississippi State (Nov. 18): Graded out at a career-high 97 percent in over 69 plays at left tackle … Paved the way for the fourth-most yards in school history as the offense compiled 661 total yards, including 357 on the ground and 304 in the air … Part of offensive line that didn’t allow a sack, which snapped Mississippi State’s seven-game streak with at least one sack … Cleared paths for Rawleigh Williams’ career-high 205 yards rushing and four TDs, as well as Devwah Whaley’s 112 yards and one score on the ground … Provided time for Austin Allen to complete 18 of 25 passes for 303 yards and two TDs … at Missouri (Nov. 25): Blocked for 500+ yards of total offense for the third time, including 348 yards through the air and 155 on the ground … Helped Rawleigh Williams post his seventh 100-yard rushing game and blocked for Austin Allen to tally his fourth 300-yard passing effort.

Started all 13 games at right tackle … Finished second on the team with a 83 percent offensive grade over 900 snaps … Earned a 80 percent grade or better in a team-best 12 games, including the final seven … Graded the highest on the offensive line four times … Helped the Arkansas offensive line lead the SEC in fewest sacks allowed for the third straight year … Didn’t commit a penalty over the final nine games … Had 53 knockdowns with four of top five totals coming in SEC action … Paved the way for running back Alex Collins to run for over 1,500 yards and become just the third player in SEC history with three straight 1,000-yard campaigns to begin his career … Collins tied for the SEC lead with 10 100-yard rushing games, equaling Darren McFadden’s program single-season record … Arkansas led the SEC with five 200-yard rushing games in league play and had a total of eight on the year … vs. Texas Tech (Sept. 19): Had eight knockdowns and posted an 86 percent grade as Arkansas put together the first of its eight 200-yard rushing performances … at Tennessee (Oct. 3): Produced a team-high 10 knock downs and sixth straight 80 percent-plus grade, helping pave the way for 250 yards rushing on 50 carries for Arkansas’ first win in Knoxville since 1992 … vs. Auburn (Oct. 24): Earned a season and team-best 90 percent grade with eight knockdowns as Arkansas had over 200 yards on the ground and in the air en route to seven touchdowns in a win … at No. 9 LSU (Nov. 14): Team-best 86 percent grade with five knockdowns as Arkansas ran for 299 yards on 40 carries, highlighted by TD runs of 80 and 69 yards, respectively, for the two longest rushing TDs of the season against LSU … Named SEC Offensive Lineman of the Week on Nov. 16.

Appeared and started in all 13 contests at left tackle … Participated in more than 700 snaps and recorded a blocked kick … Led the offensive line with a grade of 80 percent in more than 50 snaps … Blocked for RBs Alex Collins and Jonathan Williams, who were the only FBS teammates to each rush for 1,000-plus yards in the 2014 season … Helped protect QB Brandon Allen as the offensive line led the SEC with 14 sacks allowed … at Texas Tech (Sept. 13): Earned SEC Offensive Lineman of the Week after he recorded a season-high 10 knockdowns as the Razorbacks posted over 400 rushing yards in the road win … vs. No. 7 Alabama (Oct. 11): Graded out at a season-high tying 84 percent offensive grade … vs. No. 20 LSU (Nov. 15): Posted seven knockdowns and didn’t allow a sack in the Razorbacks’ shutout over the Tigers … vs. No. 17 Missouri (Nov. 29): Recorded a blocked kick.

Freshman (2013)
Played in all 12 games and started the last eight at offensive guard and blocked a school-record three field goal attempts … Named a Freshman All-American after blocking as Alex Collins became the second freshman in school history and 10th true freshman in SEC history to rush for 1,000 yards … The only player in the SEC and one of eight nationally to have at least three blocked kicks … His blocked field goals total tied for the 2nd-highest single-season total in SEC history and for the 8th-highest single-season total in NCAA history … Only 22 teams in the country had more blocked kicks, including punts, than Skipper … The offensive line also allowed the Razorbacks to produce eight individual 100-yard rushing performances and rush for more than 200 yards as a team nine times … Alex Collins and Jonathan Williams became the second Razorback duo to each reach at least 900 rushing yards in one season, joining Darren McFadden and Felix Jones from 2006 and 2007 … The offensive line also broke the single-season school record by only allowing 8.0 sacks … Arkansas led the SEC and tied for second in the NCAA with an average of 0.67 sacks allowed per game … The Razorbacks’ average of one sack allowed for every 37.63 pass attempts was the best in the conference and seventh in the nation …  vs. Texas A&M (Sept. 28): Made the first start of his career and helped the offense gain 483 yards … vs. Mississippi State (Nov. 23): Started at guard as the Razorbacks rushed for 225 yards and also blocked a field goal, his third blocked kick of the season, a school record.

High School
Rated as the No. 32 offensive tackle in the country by Scout, the No. 4 prospect in Colorado and the No. 46 offensive tackle in the country by Rivals, and the state’s No. 5 prospect and the country’s 47th offensive tackle by 247Sports … Earned 5A all-state recognition as a senior, helping Ralston Valley High School average 35.8 points per game while advancing to the semifinal round of the state playoffs, and after the season was selected to play in the Offense-Defense All-American Bowl … His junior season, the Mustangs put together a 10-2 record and advanced to the quarterfinal round of the state playoffs … A member of student government all four years in high school, where he contributed more than 100 hours of community service and served his senior year as student body president … A member of the National Honor Society and volunteered for a program to mentor incoming freshmen … Coached by Matt Loyd … Received numerous scholarship offers and chose Arkansas over Ole Miss, Tennessee, Ohio State and Michigan.