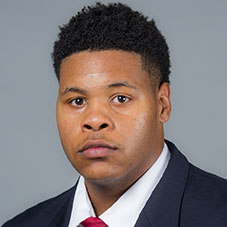 Redshirt Freshman (2016)
Did not participate in any games.

Freshman (2015)
Redshirted as a true freshman.

High School
An early enrollee who was a consensus three-star prospect by Rivals, ESPN, Scout and 247Sports … Named the No. 8 player in the Natural 21 by HawgSports.com … Ranked the No. 9 best player in the state of Arkansas and the 38th-best strong side defensive end in the nation by Rivals … ESPN listed him as the No. 87 defensive tackle and Scout as the No. 118 defensive end in the nation … Earned three stars by 247Composite, a combined index of national recruiting rankings … Recognized as the 2014 Dan Hampton Award winner given to the Arkansas high school defensive lineman of the year by the Little Rock Touchdown Club … Named to the Associated Press Arkansas Super Team as a senior … Earned All-ArkansasVarsity.com second team honors at defensive line … Helped lead Northside to a seven-win improvement in 2014, a 10-4 record and the second round of the Arkansas class 7A playoffs … Posted 73 tackles, including 9.0 for loss, two sacks and one fumble recovery as a senior … Totaled 50 tackles and six sacks in his junior campaign … Coached by Mike Falleur … Graduated high school with a 4.0 GPA and was a member of the National Honor Society … Selected the Razorbacks over offers from Ole Miss, Oklahoma State and others.