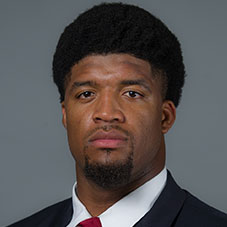 Career (2012-16)
A skilled pass-rusher with great size and burst off the line of scrimmage … Played in 50 games with 10 starts … Tallied 112 tackles, including 23.0 for loss, 17 quarterback hurries, six pass breakups, and four forced fumbles … Finished 10th in Arkansas history with 16.5 sacks … Notched at least one-half sack in 17 games, including three multi-sack performances … Booked 11.5 of his 16.5 career sacks against SEC opponents, including at least one-half sack in seven of his final 18 conference games … Collected 80 tackles, including 16.0 for loss, and 11.5 sacks over his junior and senior seasons.

Served as a team captain … Played in 13 games with eight starts … Totaled 49 tackles … Ranked tied for third on the team with 5.5 tackles for loss and second with 3.5 sacks … Forced a fumble, led the team with seven quarterback hurries and broke up three passes … 49 tackles tied for third-most on the team and tied for most among defensive linemen … Started the first eight games … Posted at least one-half tackle for loss in each of the first five games and in seven contests overall … Recorded at least one-half sack in each of the first three contests and four games overall … Tied for the team lead in tackles in two games … vs. Louisiana Tech (Sept. 3): Named SEC Player of the Week after he filled the stat sheet with a team-high tying seven tackles, including one-half sack, a career-high three quarterback hurries and a batted down pass … Helped halt what would be Louisiana Tech’s final drive of the game during the fourth quarter as he combined for a 10-yard sack with fellow defensive lineman Jeremiah Ledbetter to force a punt that allowed Arkansas to run out the clock for the win … at No. 15 TCU (Sept. 10): Dropped Horned Frogs quarterback Kenny Hill for a sack on the first drive of the third quarter and finished with four tackles … vs. Texas State (Sept. 17): Recorded one-half sack for a 9-yard loss to force a punt late in the first quarter … vs. No. 10 Texas A&M (Sept. 24): Finished second on the team with six stops, including 1.0 for loss … vs. Alcorn State (Oct. 1): Registered a sack for a 6-yard loss on third down to force a punt midway through the second quarter … vs. No. 12 Ole Miss (Oct. 15): Finished with four tackles, including 0.5 for loss, one quarterback hurry and two pass breakups … Broke up his first pass of the game on the Rebels’ first drive of the game that resulted in a three-and-out  … Hurried Ole Miss quarterback Chad Kelly to forced an incomplete pass on third down in the second quarter … at No. 21 Auburn (Oct. 22): Tied for the team lead with eight tackles (6 solo) …  vs. No. 11 Florida (Nov. 5): Logged one-half sack in the fourth quarter to claim sole possession of 10th place all-time in school history with 16.5 career sacks … vs. No. 22 Virginia Tech (Dec. 29): Collected four tackles, including 0.5 for loss.

Played in all 13 contests … Led the team, tied for sixth in the SEC and ranked 39th nationally in sacks (8.0) … Led the SEC in sacks during conference play (8.0) … Registered 4.5 sacks against ranked opponents, good for second in the SEC and tied for sixth nationally … Led the SEC and tied for 10th nationally in sacks per game against ranked opponents (1.13) … Recorded a sack in each of the last four regular-season contests, totaling seven over that stretch … Paced the SEC and ranked second nationally in sacks during the month of November (7.0) … Forced three fumbles, including one in each of the last two regular-season contests … 19 of his 31 tackles came in the last five games of the season … Tied with teammate and linebacker Brooks Ellis for the team lead in quarterback hurries (5) … Led all Razorback defensive linemen in pass breakups (3) … at Tennessee (Oct. 3): Helped the defense hold the Volunteers to a 35-yard field goal in the second quarter by forcing an incomplete pass on third down with a quarterback hurry … Forced a fumble for the first time in his career on third down at the 8:32 mark in the fourth quarter which forced Tennessee to punt from its own 7-yard line … at No. 8 Alabama (Oct. 10): Corralled his first sack of the season for an 11-yard loss on a first-and-10 play in the third quarter, eventually leading to a punt three snaps later … Helped the defense hold Heisman Trophy winner Derrick Henry to below 100 yards rushing … at No. 19 Ole Miss (Nov. 7): Logged a sack for a 7-yard loss on second down with 22 seconds left in the fourth quarter, helping halt the Rebels’ potential game-winning drive and force overtime … at No. 9 LSU (Nov. 14): Had career highs in tackles (6), tackles for loss (2.5) and sacks (2.5) … His 2.5 sacks all came on third-down passing plays and were the third-most by any player in an SEC game during the season and the most by a Razorback in an SEC contest since Trey Flowers had 3.5 at Auburn 2012 … Helped the defense hold LSU’s high-powered run game to just 59 yards rushing … vs. Mississippi State (Nov. 21): Set a career high in tackles (7) for the second straight game … Notched a sack and forced a fumble that was recovered by fellow defensive lineman Taiwan Johnson, setting the Razorback offense up for a seven play, 35-yard touchdown drive with 6:50 to go in the third quarter … vs. Missouri (Nov. 27): Credited with 2.0 sacks, extending his sack streak to four games … Forced a fumble for the second straight game and third time of the season … Had a pair of quarterback hurries on third-down snaps that resulted in incomplete passes, forcing the Tigers to punt each time.

Sophomore (2014)
Saw action in 10 contests and started once at defensive end … Logged 13 tackles, including 3.0 for a loss and 2.0 sacks and added three quarterback hurries … at No. 6 Auburn (Aug. 30): Posted a pair of tackles in the season opener … vs. Northern Illinois (Sept. 20): Registered two stops in the non-conference victory … vs. No. 20 LSU (Nov. 15): Tallied three tackles, including 1.5 sacks for a loss of 14 yards in Arkansas’ shutout over the Tigers.

High School
Committed to the Razorbacks prior to his senior season … Was the 31st-ranked defensive end in the country by Scout, the No. 38 weakside defensive end in the nation according to Rivals and the 30th-best weakside defensive end in the country by 247Sports … Recorded 113 tackles, including 12 for loss with 10 sacks, two forced fumbles, two quarterback hurries and one blocked field goal in 2011 while helping Hebron High School into the state playoffs … Following his senior campaign, he was named District 8-5A Defensive Player of the Year … In his junior season, he totaled 40 tackles, including seven sacks … Coached by David Brazil … Chose the Razorbacks after also receiving offers from Texas A&M, Vanderbilt, Arizona, Purdue and Wake Forest.

Personal
Born on July 26, 1994 … Son of Deatrich and Sheila Wise … Father was drafted in the ninth round of the 1988 NFL Draft by the Seattle Seahawks and also spent time with the New Orleans Saints and the CFL’s British Columbia Lions … Earned his undergraduate degree in kinesiology in May 2016 … 2012-13 First-Year SEC Academic Honor Roll.