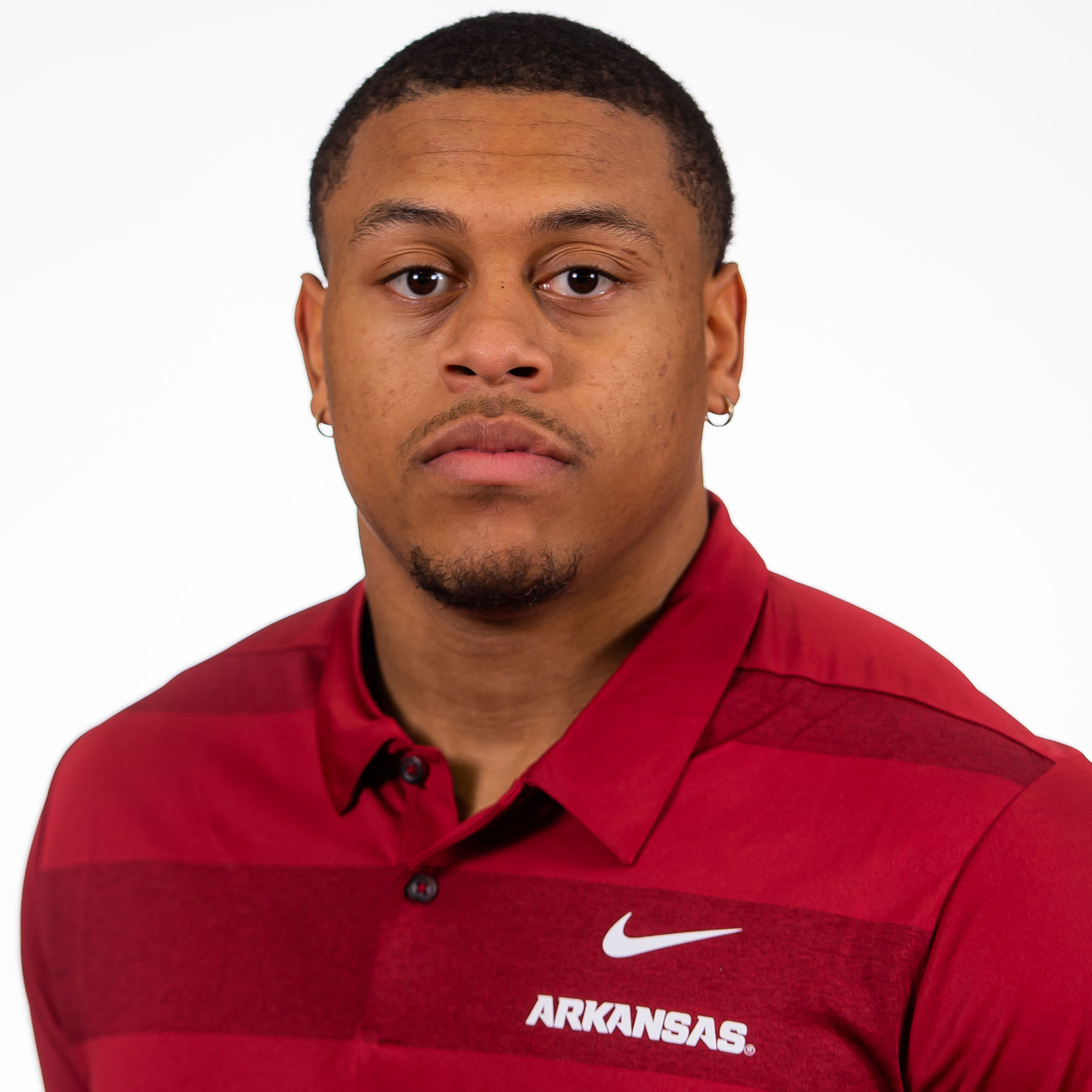 2018 (JUNIOR): Played in seven games for the Razorbacks in 2018, starting each of the first four in the backfield … Totaled 212 snaps during his junior campaign, according to Pro Football Focus … Carried the ball 82 times for 368 yards and two touchdowns, averaging 4.5 yards per carry and 52.6 yards per game … Second on the team in rushing yards and attempts … Also hauled in eight receptions for 87 yards to finish third on the team in all-purpose yards (455) … Led the team in rushing in three games, including each of the first two contests … Carried the ball 10 times in the season opener against Eastern Illinois for 28 yards and a score, finding the end zone on a one-yard run in the second quarter … Followed it up with his best game of the year at Colorado State a week later, pounding the rock for a career-best 165 yards and a touchdown on 26 carries … His first 100-yard game since week four of 2017 against New Mexico State and fourth of his career … It was the 325th 100-yard rushing game by a Razorback and the 28th player in school history to have four career 100-yard games on the ground … Scored on a three-yard carry in the first quarter for Arkansas’ first points of the contest and finished with a season-best 74.1 rushing grade from PFF and an overall mark of 73.8 … Posted nine carries for 12 yards against North Texas and eight for 26 yards at Auburn in the next two matchups before missing the next two games due to injury … Had a strong return game against Ole Miss in Little Rock, rushing for 67 yards on 12 carries against the Rebels, but missed the next three games … Played the final two games of the season on the road at Mississippi State and Missouri, carrying the ball four times for 16 yards against the Bulldogs and 13 times for 54 yards vs. the Tigers … Also recorded a season-high 61 yards over two catches at Mizzou in the season finale … Part of a tailback unit that went for 1,721 rushing yards and 11 TDs.

2017 (SOPHOMORE): Started 11 of 12 games played … Finished as the team’s second leading rusher with 559 yards and seven touchdowns on 127 carries … Caught eight passes for 56 yards and a score … Longest run was 33 yards … Recorded one 100-yard rushing game (119 vs. New Mexico State) … Tied for the team lead in total touchdowns (8) … One of two SEC running backs to score a touchdown rushing or receiving in each of the last six regular season games … Recorded 28 first down runs, 13 for 10+ yards, and five for 20+ yards.

2016 (FRESHMAN): Played a key role in the backfield and saw time in all 13 games … Rushed 110 times for 602 yards and three touchdowns … Averaged 5.5 yards per carry to rank fourth among SEC freshmen running backs with at least 100 attempts … Added six receptions for 139 yards … Became just the fourth Razorback in school history to record two 100-yard rushing games as a freshman … Rushed for 50 or more yards in seven games … Flashed explosiveness with runs for 75, 50, 34 and 30 yards and receptions for 43, 26, 26 and 23 yards … Found the end zone on runs for 75 and 30 yards … 28 runs converted first downs … Ripped off 19 runs for 10-plus yards, including four for 20 or more … Posted a 30-plus yard run in each of the last three regular season games … Had a 10-plus yard run in eight games … vs. Alcorn State (Oct. 1): Burst onto the scene with a season-high 135 yards and a touchdown on nine carries to average 15.0 yards per carry … Dashed 75 yards for a TD on his first touch of the game in the first quarter … Five of his nine carries resulted in a first down … His 135 yards were the most by a Razorback freshman since Alex Collins rushed for 172 yards against Samford in 2013, while his 75-yard score was the team’s longest play of the season and the longest scoring rush by a freshman running back in school history since Felix Jones scored from 80-yards out against Missouri State in 2005 … vs. No. 11 Florida (Nov. 5): Accounted for 135 yards of total offense with 66 on the ground and 69 through the air … Produced 73 (30 rushing and 43 receiving) of the offense’s 91 yards on its first quarter scoring drive that gave the team a 14-0 lead … Turned his first career interception in the first quarter into a 43-yard gain on a screen play, while his second in the fourth quarter went for 26 yards as both drives resulted in points … Four of his 14 rushes went for 10 or more yards … Totaled six first downs, highlighted by four on the ground … at Mississippi State (Nov. 19): Topped the 100-yard rushing barrier for the second time with 112 yards and one touchdown on a career-high 19 carries … Had four runs of 10 or more yards, highlighted by a 50-yard run in the second quarter … Seven of his 19 carries resulted in a first down … Combined for 317 yards rushing with Rawleigh Williams III (205) … It marked the second time on the season and 40th time in school history that Arkansas produced multiple 100-yard rushers in the same game … at Missouri (Nov. 25): Broke free for a 30-yard TD run late in the first quarter.

HIGH SCHOOL: A consensus four-star recruit by ESPN, Rivals, Scout and 247Sports … Selected Arkansas live on ESPN during the Under Armour All-America game … Ran for 47 yards on 12 carries in the 27-0 Team Highlight win over Team Armour … Rated as the No. 3 running back in the nation by 247Sports with a grade of 94 … ESPN 300 prospect at No. 70 overall and the No. 6 running back in the class … Also rated as the No. 11 player in the state of Texas by ESPN … Finished with a No. 3 overall running back ranking and the No. 15 player in the state of Texas by 247Composite, a combined index of national recruiting rankings … Consensus top seven running back in the class of 2016 by every recruiting service … Tabbed as the No. 2 running back in the state of Texas and the No. 117 overall prospect by Scout … Earned the No. 5 running back ranking and No. 167 overall by Rivals … Finished at No. 14 in the American-Statesman Fabulous 55 of Texas’ top recruits … Ran for over 2,500 yards in two seasons … Earned All-District 22-5A first team honors as a senior … Rushed for 1,701 yards and 23 touchdowns as a senior at Central High School under head coach Toby Foreman … Chose Arkansas over Alabama, Ole Miss, Georgia, Tennessee, Texas A&M, Mississippi State, Texas, Oklahoma, Baylor, TCU, Notre Dame, Stanford, Texas Tech, Houston, Miami (FL), Missouri, Arizona State, Memphis and others.